By Alex Hudson
Published Oct 01, 2021
These days, a musician's "jam space" can mean almost anything. It could be a soundproofed garage or a lockout room in a practice facility — or it could be as simple as a laptop with a MIDI controller, or even a bed with a couple instruments nearby.

We asked some Canadian musicians to take us inside the jam spaces where they create their art. As you'd expect from this eclectic group, their spaces are wildly diverse and range from an iconic Montreal studio to the living room of a band's shared apartment.

No matter the space, there is one common denominator: all of the musicians have found an ideal place to hone their craft. 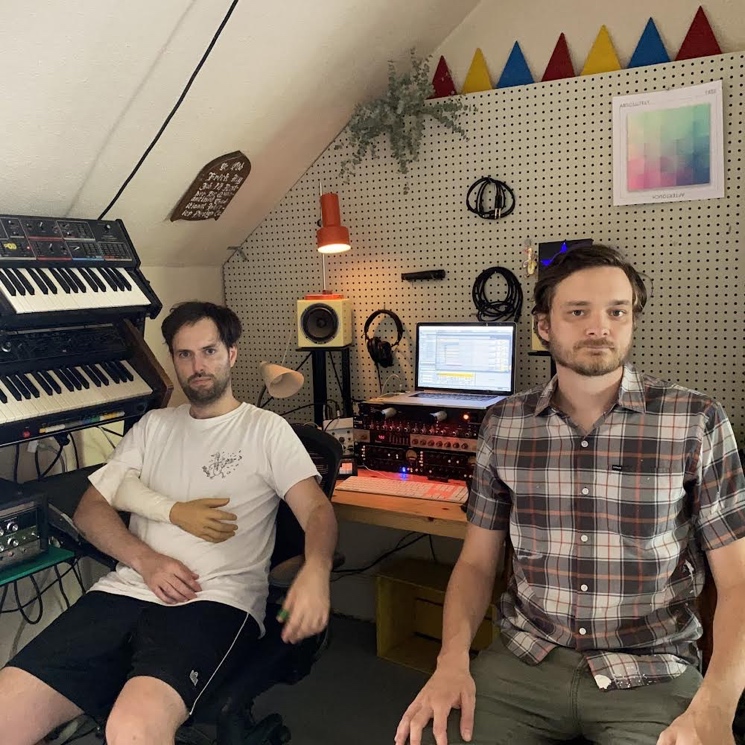 Absolutely Free describe their Studio 5/4 as "nomadic," and it's currently located in an attic just north of Toronto's Parkdale neighbourhood. Those big racks of keyboards — not to mention the extra arm — go a long way to explain the band's lushly atmospheric, psychedelic pop-rock sound, as heard on the newly released album Aftertouch (the cover artwork of which is pinned to the wall in this photo). 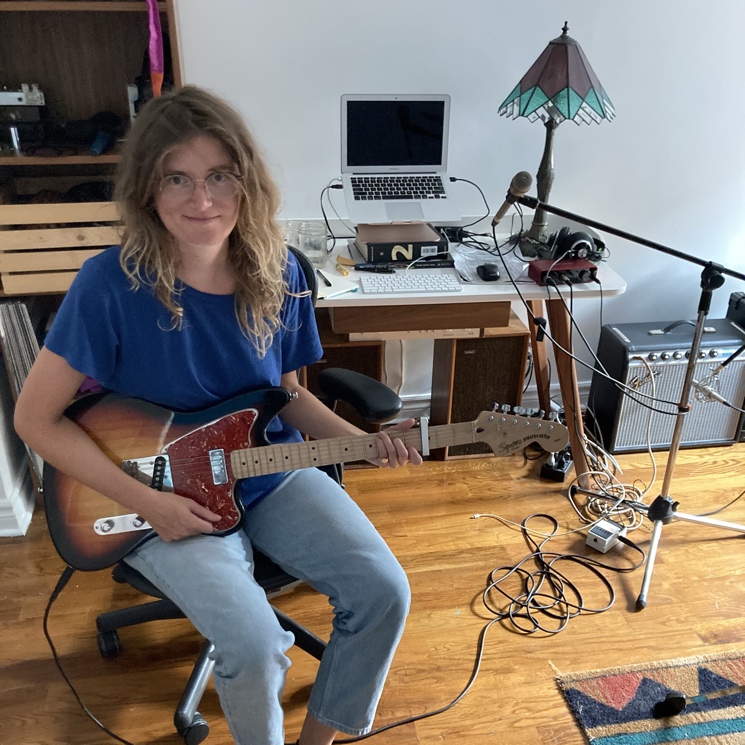 Toronto folk rock songwriter Charlotte Cornfield has never before had a dedicated workspace where she makes music — but now that's finally changed. She tells Exclaim!, "It's been so nice to be able to close a door and be in my own world. I have my drum kit in here, and a little piano and some guitars and amps and a small recording setup. In the late afternoons, the sun streams in and it's glorious." Listeners can step inside her world with Highs in the Minuses, out October 29. 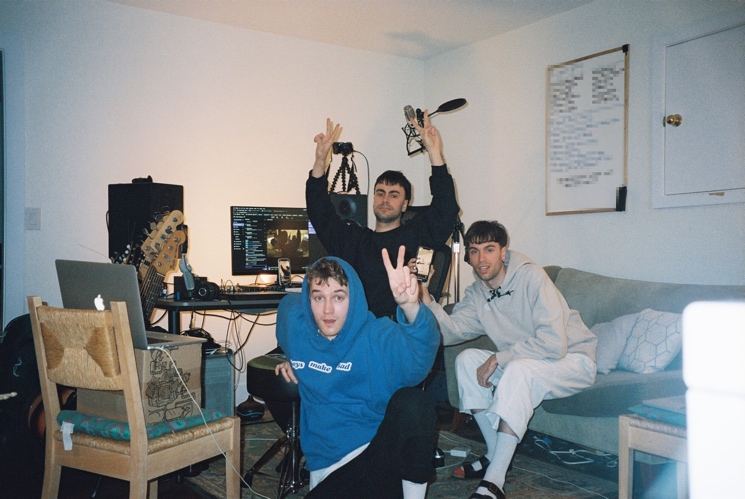 The members of British Columbia band daysormay all live together, so they have turned their living room into a home studio where they craft their bright, maximalist synth-rock. Singer Aidan Andrews tells Exclaim!, "I really love the accessibility of having all our gear right there, so we can get ideas down first thing in the morning or go until really late at night without having to leave the apartment to go to bed."

It's the perfect place to create jittery pop bangers like the recent "Just Existing." Okay, not quite perfect: "We do live in a basement suite though, so some more windows and sunlight would be awesome. That's maybe the only downside," Andrews says. Like true pros, they pixelated the whiteboard before sending in this photo, presumably so we can't see what they're working on. 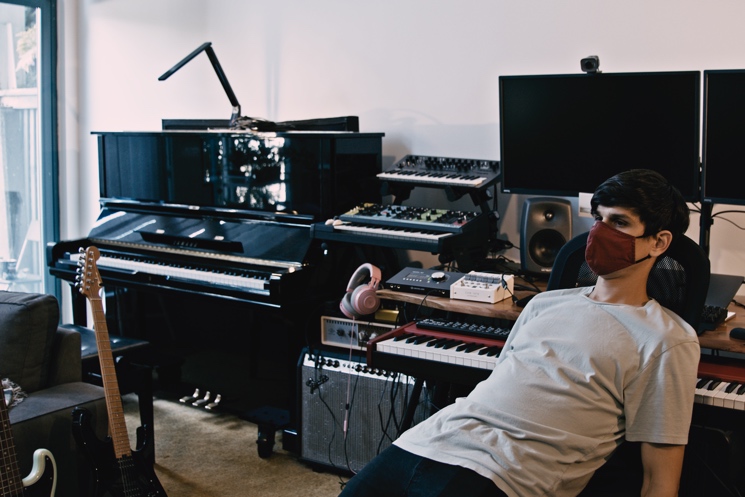 Throughout the past decade, Jo Hirabayashi has fronted projects like SSRIs, Sprïng and his own Jo Passed, adding post-hardcore flair to sounds that have ranged from psych-pop to alt-rock to pastoral folk. Along the way, he's also become an established producer, which explains why his house has because a music-making space piled with gear. Hirabayashi explains, "There are many keys along this wall — keys to my heart? I've been fortunate to have space to create and put ideas down, and look forward to putting these things out there. I am music machine without person or place." 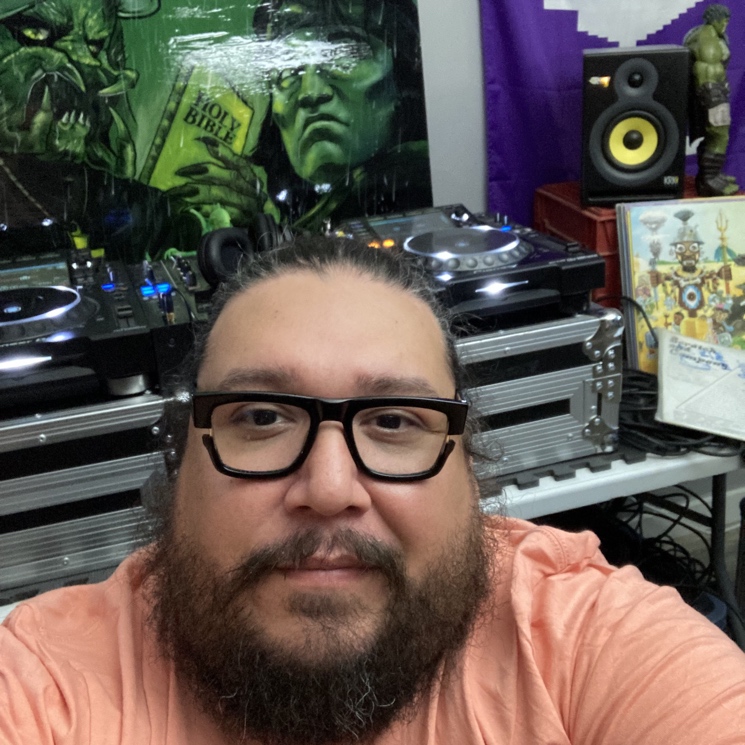 From their work as A Tribe Called Red to their famed Ottawa dance parties, the Halluci Nation are all about bringing people together for communal, celebratory gatherings. But for the duo's Ehren "Bear Witness" Thomas, it all begins in the cozy confines of his own home.

"This is my basement studio," he says. "But it's more than just that. It's where I keep all my special things, collections and stuff that inspires me. But 2oolman is only here every few months and I miss working with him on the daily. And I just miss him." Even if the band members currently don't see one another quite as often as they're used to, listeners can still party with them by listening to their new album One More Saturday Night. 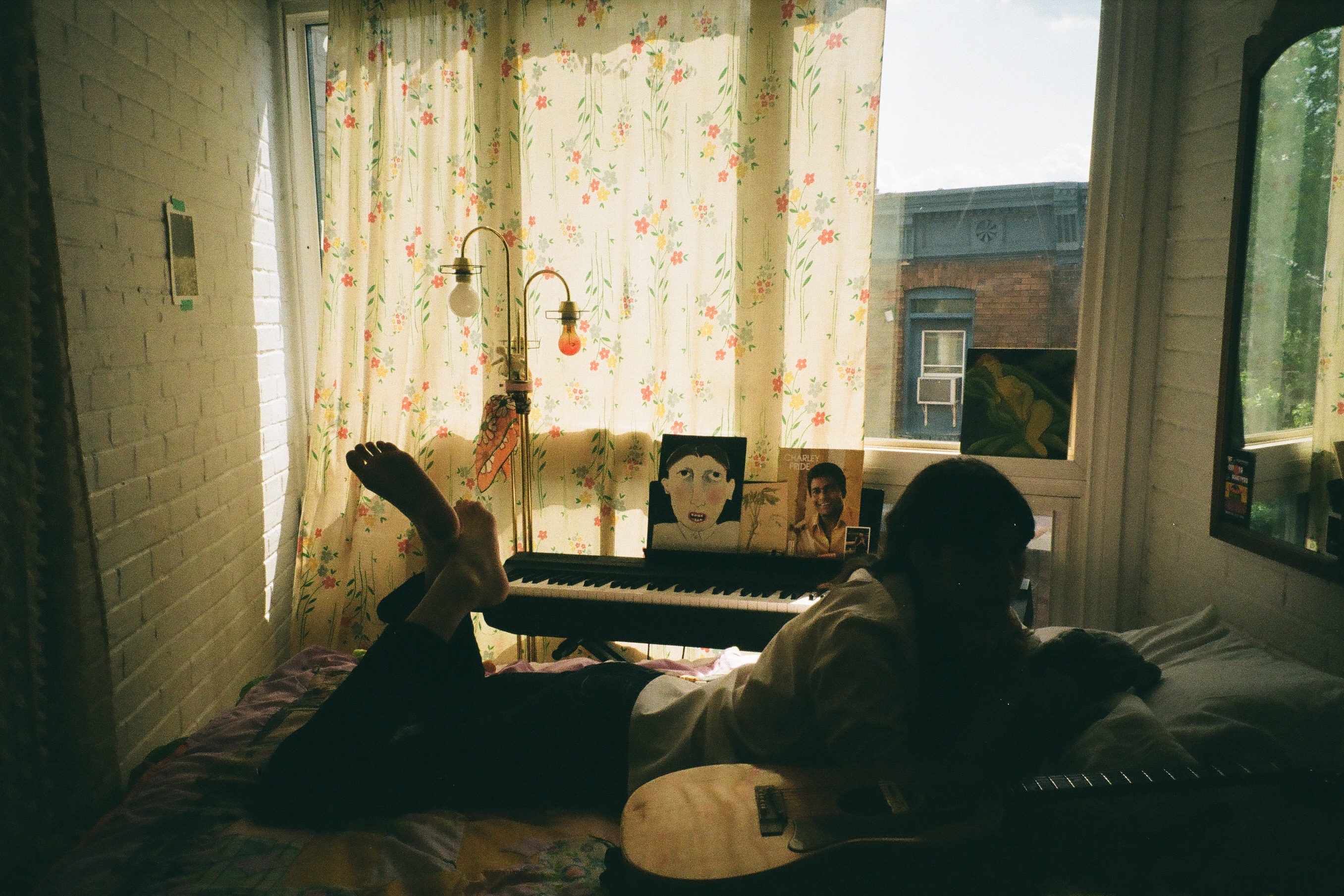 Le Ren's songs are quiet, folksy and intimidate. Debut album Leftovers (out October 15) feels a bit like wrapping yourself in a warm, cozy blanket — so it makes perfect sense that the Montreal-based artist likes working on music in bed. She explains, "I've never been the type of person who can work at a desk and am somehow more productive when horizontal. In my bed, I write, practice and record my demos. It is the place where I feel most comfortable and creative." 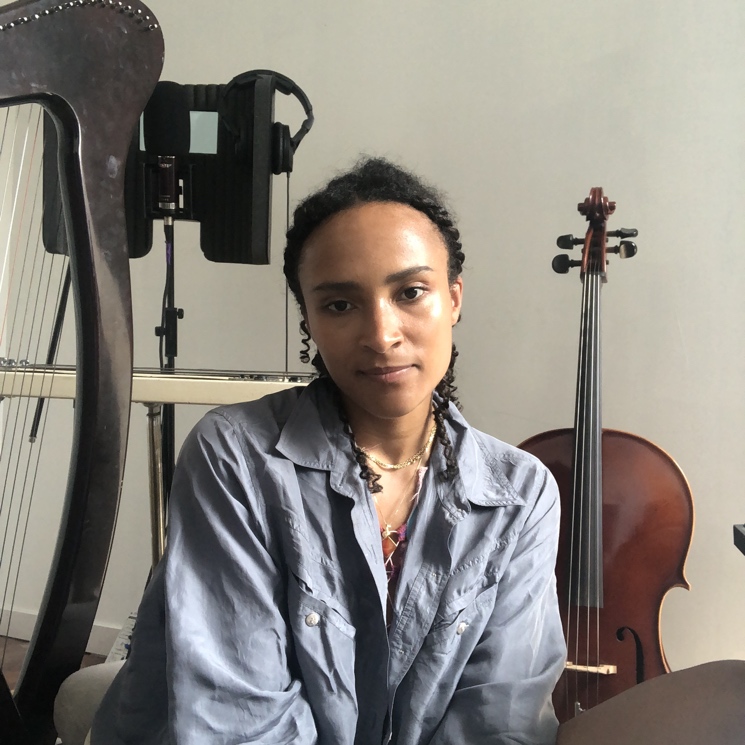 Montreal multi-instrumentalist Ouri shares her space with her Paradis Artificiel bandmate Victor Bongiovanni, and even though the room is unfinished and undecorated, it gets direct sunlight and is a great place to create music. "It's not an aesthetic experience to step in here. You need to get lost in the music and that's all you can do here," she says. "It's not perfectly soundproofed so you have real intimacy in the morning or the evening because the rest of the floor is an actual studio. But these extremities of the day bring magic." She's been putting the space to good use lately: she and Helena Deland collaborated on a self-titled album as Hildegard, and she's releasing the electro-classical solo album Frame of a Fauna on October 22. 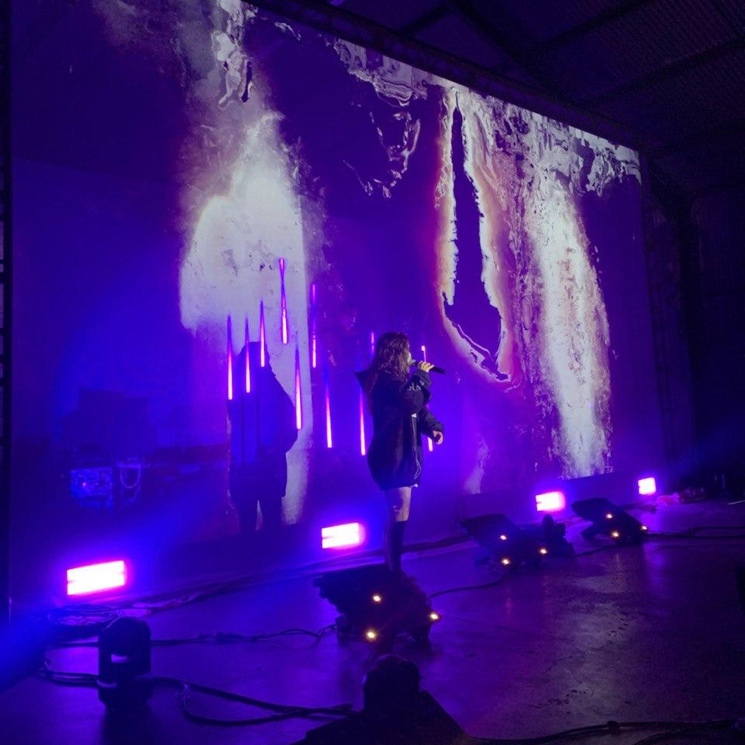 Synthpop duo Purity Ring are preparing to finally tour in support of last year's WOMB, which came out in the early weeks of the pandemic. Their current practice space is where they're gearing up for the upcoming tour — which, judging from the picture they sent over, will be a sci-fi voyage full of trippy visuals. The band said in a statement, "It's a tabernacle of light across the backs of your eyelids." Their sprawling tour runs through the fall and into the new year — see the schedule here. 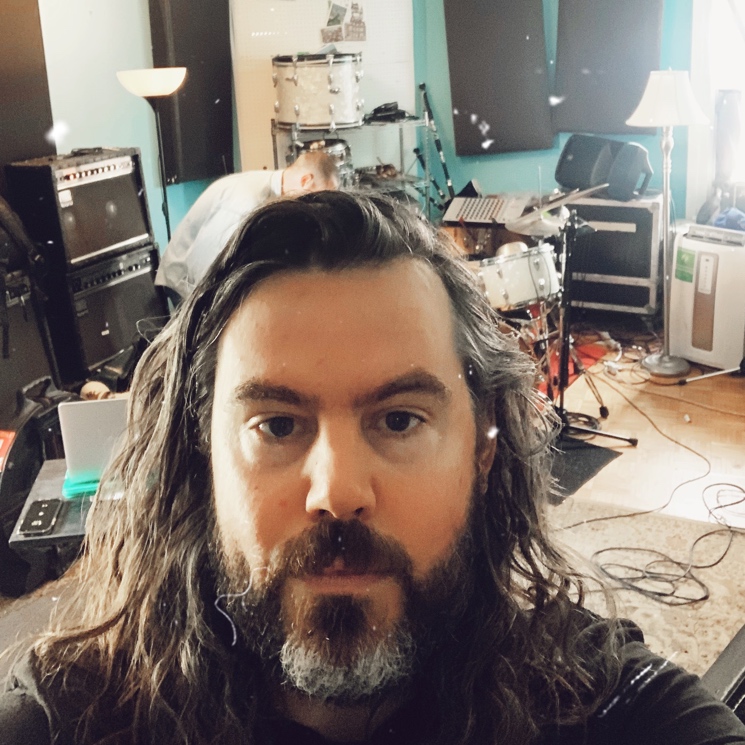 If the Montreal jam/studio space Mount Zoomer sounds a little familiar, that's because Wolf Parade named their 2008 album after it. SUUNS moved into it after Wintersleep gave up their spot, and currently they share it with both Stars and Jerusalem in My Heart. The band's Joe Yarmush tells Exclaim!, "There's plenty of light, which is rare and amazing. It's in the heart of Mile End. So to have a jam space in this gentrified neighbourhood is also quite rare. There's a bar below us. So no noise complaints." They've stripped down their sound for minimalist new album The Witness. 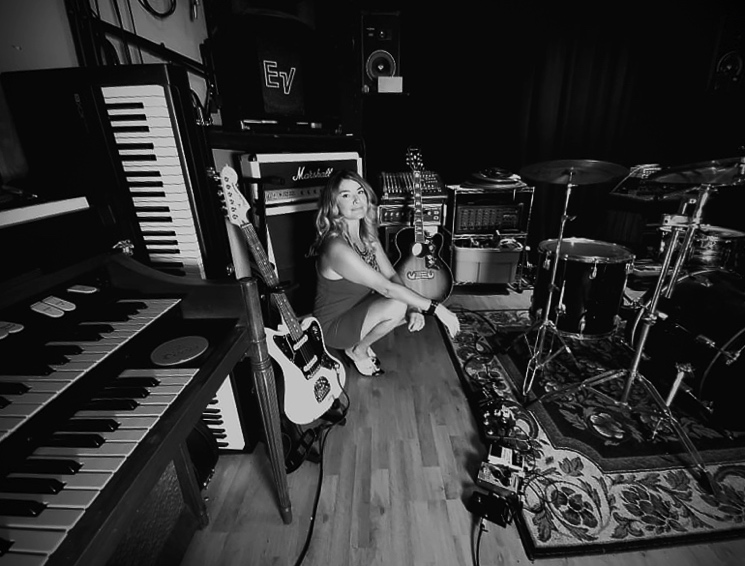 Madisyn Whajne crafts her catchy jangle pop tunes, as heard on last year's Save Our Hearts, inside of her shared jam space in Toronto's west end. She shares the so-called E5 Studio with Soft Set, Vincent Lavergne and Urban Fauna, and they run it akin to a co-op.  "We have been in this space for 20 years and it is at the heart of all our songwriting and recordings," she tells Exclaim! "It's a communal space full of love. What more could I ask for?"