By Calum Slingerland
Published Oct 08, 2019
Over the course of Drake's rise to megastardom, listeners and industry counterparts alike have called the authenticity of his lyrics into question. Now, the Canadian rap icon has been forced to address claims that lyrics about his absentee father were untruthful.

The claims come from Drake's dad, Dennis Graham, who discussed their relationship in conversation with Nick Cannon on L.A.'s Power 106 last week (October 4). Graham claimed that Drake's depiction of him as an absentee father was only done in an effort to boost records sales.

"I had a conversation with Drake about that," Graham said. "I have always been with Drake. I talked to him if not every day, every other day, and we really got into a deep conversation about that. I said, 'Drake, why are you saying all this different stuff about me man, like, this is not cool.' He goes, 'Dad, it sells records,' and I said 'Okay, well, cool.'"

Today, Drake took to Instagram to respond to the claims, writing in a story (archived below) that he "woke up today so hurt."

He explained, "My father will say anything to anyone that's willing to listen to him. It's sad when family gets like this but what can we really do that's the people we are stuck with... every bar I ever spit was the truth and the truth is hard for some people to accept."

Graham was at times a lyrical focus of Drake's early career work. On "Look What You've Done," which appeared on 2011's Take Care, Drake raps, "And my father living in Memphis now, he can't come this way / Over some minor charges and child support / That just wasn't paid, damn / Boo-hoo, sad story — Black American dad story."

In June, Graham also gave a similar answer in conversation on podcast "A Waste of Time with ItsTheReal" when asked if he knew Drake would rap about their relationship. He told the hosts, "I said 'Drake, you gotta stop this man you know that never happened.' He goes, 'Dad, listen man. Just go with the flow. This shit sells records.'" 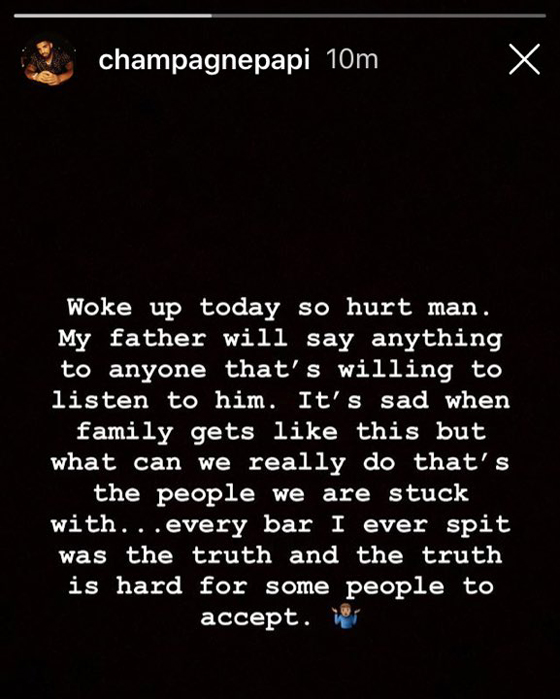 The real gem of the @itsthereal x Dennis Graham interview comes toward the end at the 1:02:00 mark. Has me raising an eyebrow at a lot of the early Drake music I loved 🧐 pic.twitter.com/mqT1vR2043

When asked if he knew Drake would rap about their relationship, his dad replied:

"No. Drake...we had a conversation about that also. I said 'Drake, you gotta stop this man you know that never happened.' He goes, 'Dad, listen man. Just go with the flow. This shit sells records'."

To be crystal clear...

Do I think Drake fabricated his experience and relationship with his pops for entertainment purposes? No, not necessarily.

Do I think him, his dad Dennis and his mom all have different perspectives and accounts about Drake's childhood? Absolutely.