By Louis Pavlakos
Published Oct 04, 2021
Scheduling an outdoor festival in Montreal on the first weekend of October was a risky move for Osheaga Get Together, a scaled-down version of the true Osheaga festival that usually takes place in early August. Despite the cold, frequent rain and a lack of sun past 6 p.m., Osheaga Get Together was a success thanks in large part to its lineup of homegrown heavyweights.

Instead of the usual five stages scattered across Jean-Drapeau Park, there were only two main stages with alternating acts throughout the entire day. The entire lineup consisted of Canadian artists, and while some names on the bill weren't as well-known as the usual Osheaga acts — this summer's cancelled festival was supposed to feature Foo Fighters, Cardi B and Post Malone — it was still the perfect opportunity to learn more about rising talent like Magi Merlin and Fernie.

Osheaga was divided off into several different sections that allowed for a lot of room to breathe in comparison to the claustrophobia-inducing standard festival in the summer. For pandemic-related reasons, this was for the best, even though Osheaga is better when the crowd comes together for their favourite artists. It was very different from the festival Osheaga usually hosts, but Get Together was largely a success for those who deeply missed the feeling of live shows. 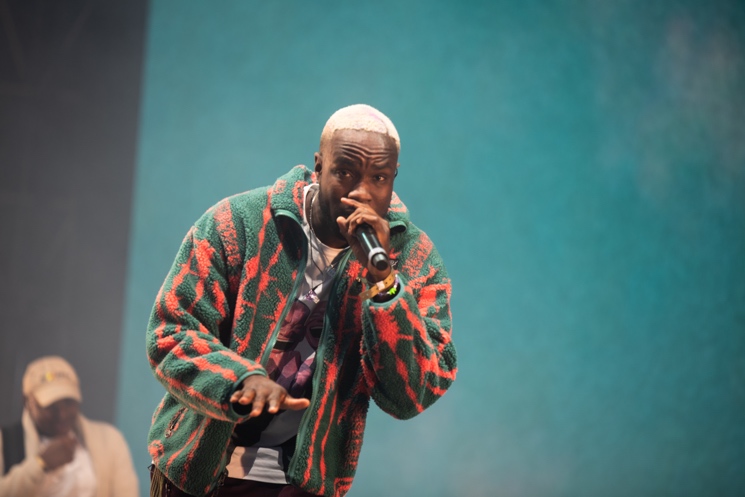 ODIE's wavy, mysterious brand of R&B translated into a standout performance on the first night of Osheaga Get Together. Though his catalogue doesn't run very deep, with only a single album from 2018, Analogue, in his short 40-minute performance, he ran through most of his singles like the bouncy, nocturnal "Faith." As good as ODIE's show was, it felt like it belonged later in the evening, when the lights were totally out. Before closing it out with "North Face," an ode to hating menial retail jobs, he asked the crowd to yell "Fuck retail!" which had nearly everyone in attendance screaming out their disdain to boring minimum-wage paying jobs. 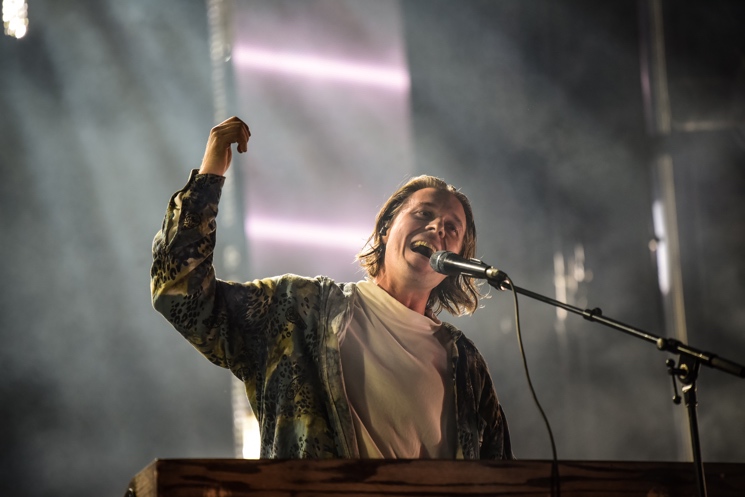 Fresh off the release of their brand new album, This Time I See It, the Franklin Electric were primed to test out which songs from the record they felt were best suited for a live performance. In an interview with Exclaim! before the show, Jon Matte said the creation of the project was a bit more scattered than their previous efforts. In the gruelling months of the winter, Matte escaped to Mexico, where he spent his days in a small community away from the realities of city-living where, in the middle of a pandemic, everything happened in front of a screen.

Matte was worried about chemistry and how not performing or being near his bandmates would kill the momentum the band had going for them. All these concerns, while valid, were cast aside once Matte and his band took the stage. They seemed like they hadn't missed a beat. Confident and assuring, the Franklin Electric continued to prove they are Montreal's new indie rock darlings. They stuck to their roots, playing a few songs off 2014's This Is How I Let You Down, but mostly tested out new songs from This Time I See It. The only thing that felt off was their time slot, as they probably could have (and should have) been the last act before the headliner, Charlotte Cardin. 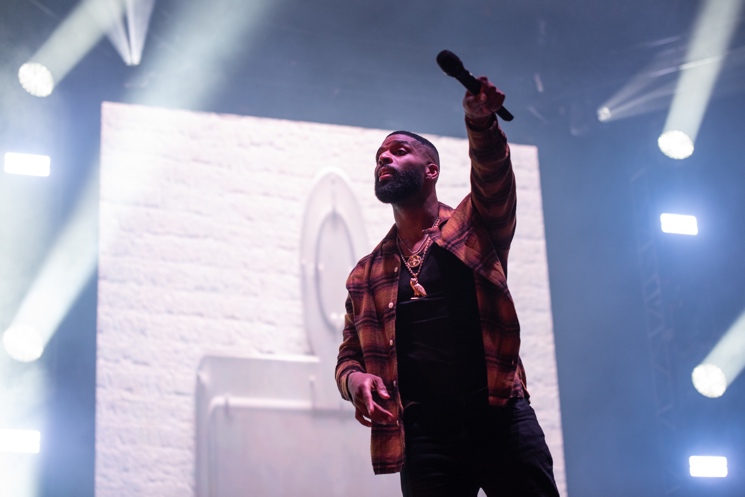 dvsn's show was a bit puzzling. Not because of his performance, where he put on the sexiest show of the night, but his music doesn't exactly scream festival music. That aside, singer Daniel Daley's vocals were the highlight of the hour-long performance. With a pretty extensive discography at this point, dvsn leaned pretty heavily into their singles, which ranged from bedroom jams to, well, more bedroom jams. Songs like "With Me," "Between Us" and "Hallucinations" were perfect examples of songs that sounded beautiful live, just a bit out of place. In a normal Osheaga festival, they probably could have closed out the night on one of the smaller stages, but on the main stage, the Toronto duo might have benefited from an earlier set time. Still, though, you'd be hard-pressed to find an R&B singer that sounds this good in a live environment. 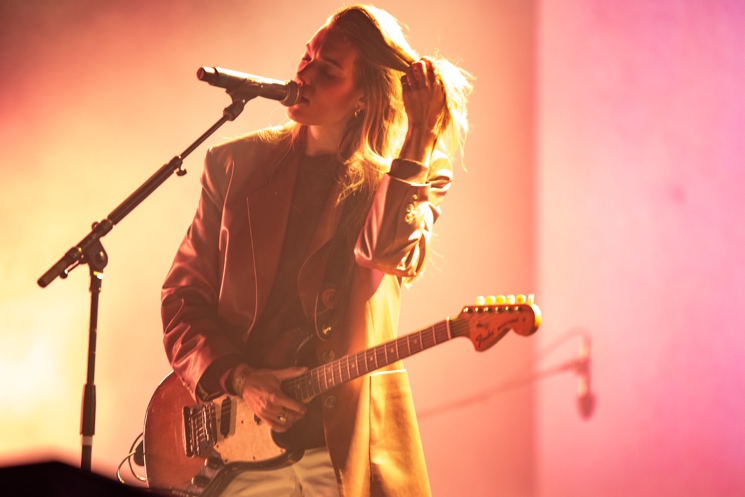 You could separate Osheaga's Friday lineup into two categories: everyone who performed before Charlotte Cardin and Charlotte Cardin herself. The crowd was energetic the entire night, but the minute Cardin got on stage herself, the vibe of the festival switched. The ground was rumbling because of how loud everyone got.

"I feel a little bit more comforted to be playing at home," recent cover star Cardin told Exclaim! before the show. "There's something a little bit special and less stressful playing at home, because I feel much more connected to the spot and I have family and friends coming too."

If Cardin did feel at all stressed, it clearly didn't show in her magnetic performance that saw her bouncing from bangers like "Passive Aggressive" and "Meaningless" to the harrowing performances of "Anyone Who Loves Me" and "Sun Goes Down."

Montreal has a new queen of pop music and, with a flurry of sold-out shows in Montreal coming in 2022, Cardin's Osheaga performance was her coronation. 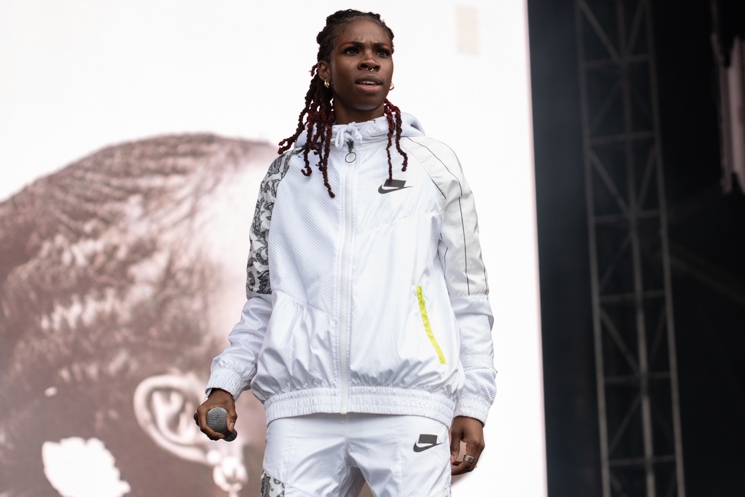 Kicking off a very hip hop/R&B-centric day was Polaris Music Prize winner Haviah Mighty, who rapped her tail off performing songs off 13th Floor and loose singles she dropped earlier this year. Despite a small crowd, she made the open terrain feel intimate, not unlike her club shows from before the pandemic. Her performance turned into a family matter when she brought out her sister Omega Mighty for "Wishy Washy." Haviah's energy was the perfect table-setter for the rest of the day. 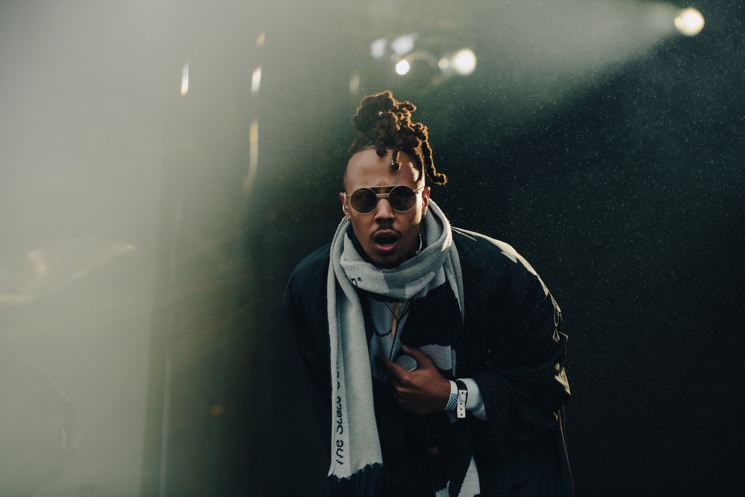 Zach Zoya's Osheaga debut has been a long time coming. After nearly being on the bill for two years, Zoya finally found himself playing a semi-large crowd in front his fellow Montrealersm who all raged whenever he played his bangers like "Le Cap," "Slurpee" and breakout single "Who Dat." Zoya, who bounces between rapping and singing, felt like he hadn't missed a beat.

He previously performed at Mural Festival in August, so the rust must have already been cleaned off. His singing voice was strong and didn't falter compared to his studio recordings. Although he continued the trend of rapping over his own vocals at first, he brought in a live band for the latter half of his performance, effectively bringing it the heat up a few notches. Zoya's ceiling is high and this performance shows he's capable of commanding a crowd of people who weren't necessarily there to see him. 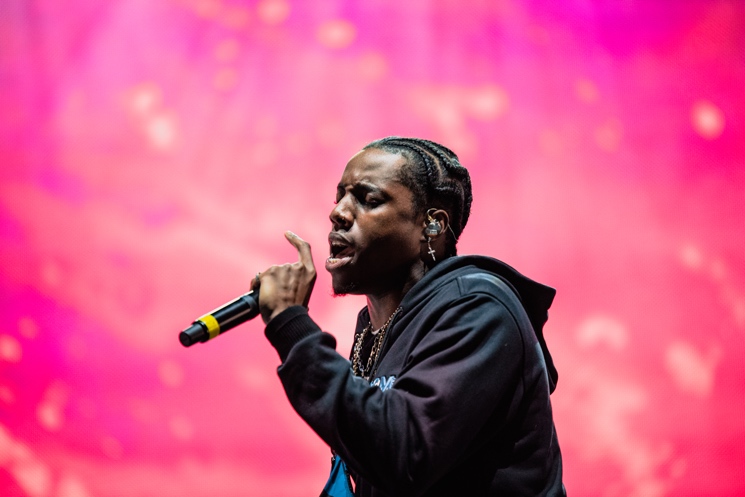 The first of the two OVO acts of the night was by far the stronger one. Where Majid Jordan sounded off-key and rusty, Roy Woods was the R&B highlight of the weekend. His music is a bit less sensual than his label-mates dvsn from the night before. His performance was sprinkled with the best songs of his still burgeoning career like "Get You Good," "Down Girl" and the Drake-assisted "Drama" (minus Drake). Woods didn't stop at just playing his own tracks. He teased what he called "Roymixes" and flipped Wizkid's summer hit "Essence" into his own, sending the crowd into a frenzy when the beat started. 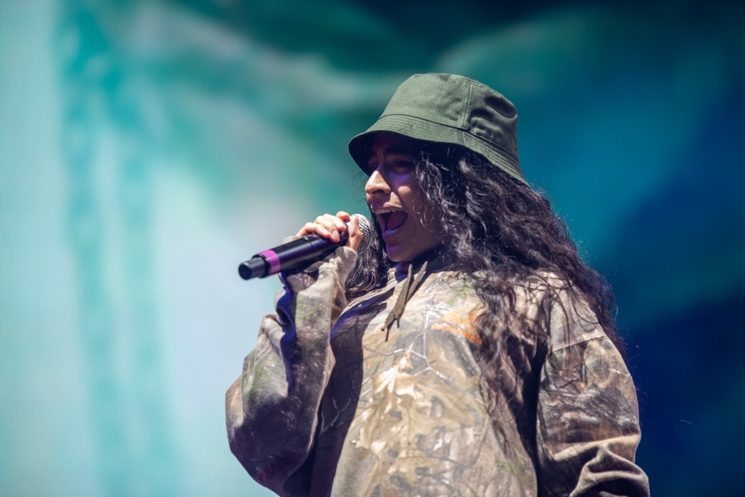 Despite cold weather and constant rain throughout the day, Jessie Reyez put on a show that made you forget those less-than-ideal conditions. Whenever Reyez wasn't singing, she made an effort to connect with the crowd more than anyone else during the weekend. She spoke about the meaning of some of her songs like "Sola" and "Gatekeeper," the latter of which she detailed the disgusting behaviour of an unnamed producer at a meeting.

The crowd for Reyez was significantly smaller than the crowd for the previous night's headliner, Charlotte Cardin — we can likely blame the rain — but those in attendance didn't shy away from singing along to songs like "Imported" and the set-closing "Figures." Reyez proclaimed her love for Montreal and playing in Canada, noting just how culturally diverse the entire crowd was. Jessie Reyez is for the people, and she put that on display when she closed out a solid second day of Osheaga Get Together. 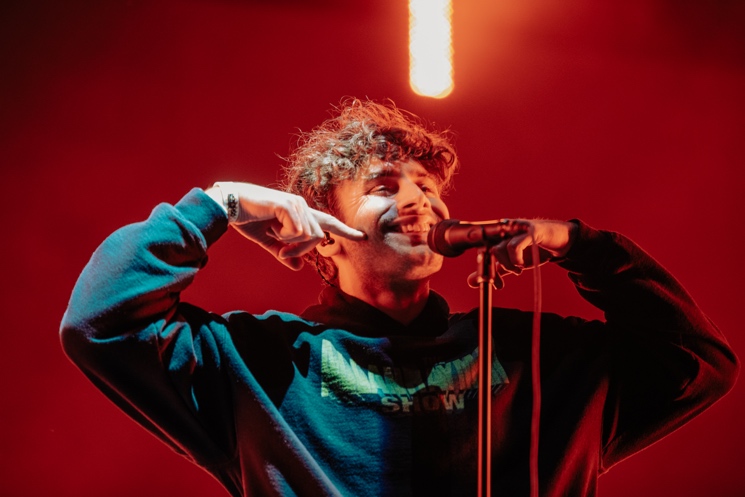 Allan Rayman's nihilistic take on rock translated into a dark grungy performance that drew in the crowd. The Toronto native has always been a mysterious person, and his show only added to the Allan Rayman mythology. He didn't talk much, and when he did, it was muffled rumblings about more or less nothing. His provocative edge on-stage perfectly matched the darkness of his music.

Before his performance, Rayman spoke with Exclaim! about his perception on life changing a bit during the pandemic. He said that the time off from regular life allowed him to "live in the moment a little bit more." On stage, this was more than apparent. Rayman didn't seem to have any care in the world aside from putting on a show for his fans — something he did with relative ease. 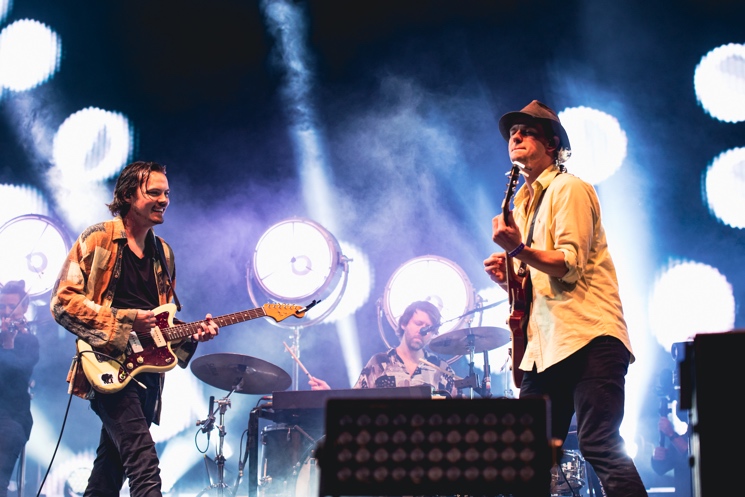 The finale of Osheaga Get Together was as good as advertised. Montreal-based indie-rock band Half Moon Run closed out the mini-festival with a solid performance, one that drew in a much larger crowd than Saturday (probably because of the nicer weather). Their performance came on the heels of their latest EP, this year's Inwards & Onwards, allowing them to test out some tracks from the project while also catering to longtime fans by playing older hits like "Full Circle" and "Need It." They weren't particularly flashy, especially for a headliner, but they got through their hour-long set without any hiccups and with the help of an ecstatic crowd that had been clearly waiting for Half Moon Run more than any other band that day.