By Antoine-Samuel Mauffette Alavo
Published Nov 23, 2022
M for Montreal is a unique, industry-focused event that differs from the marquee-lineup-driven musical festival format we've grown accustomed to. Although it offers a familiar schedule of showcase concerts and panels, the festival manages to propose singular networking opportunities and provides a proper taste of the Montreal scene to out-of-town delegates. In fact, some of its biggest draws are actually industry speakers like Megan Jasper, CEO of Sub Pop Records. The festival focuses on giving artists on the cusp of stardom a platform to be seen and a jumpstart to their music industry journey.

But even in this format, as in most cases, the music reigns supreme. Offering a variety of genres and artists from all kinds of backgrounds, M for Montreal hosts a multitude of shows and a multitude of experiences. Here are the top 10 shows and artists that stood out during this three-day musical escapade in my own hometown.

Odreii
The Belmont lineup was around the block as festival shuttles arrived left and right. Once inside, R&B artist Odreii made everyone feel at home and, backed by the sonically tight EKG band, she took the stage by storm. Odreii made the most of her 20-minute showcase by displaying her sumptuous, multi-lingual vocals and acute chemistry with her band. With a globally-influenced style that's hard to pin down, Odreii utilized her versatility and tour-honed crowd control chops. Memorable hooks and catchy melodies make it unlikely anyone left the venue without a tune or two stuck in their minds. 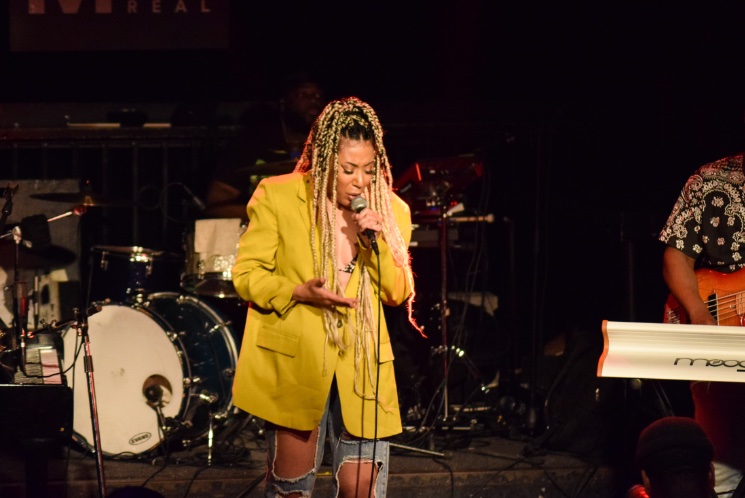 Witch Prophet
Le Ministère is a former nightclub turned concert venue, and its high ceiling and marble exterior created the perfect atmosphere for Witch Prophet's beat-driven musings. Looping melodies and ethereal vocals seamlessly melded into an epic odyssey, songs feeding off and blurring into one another. The captivating performance had the crowd's ears perked, alive with a meditative sway as they soaked in the Toronto songwriter's unmistakable experiments. 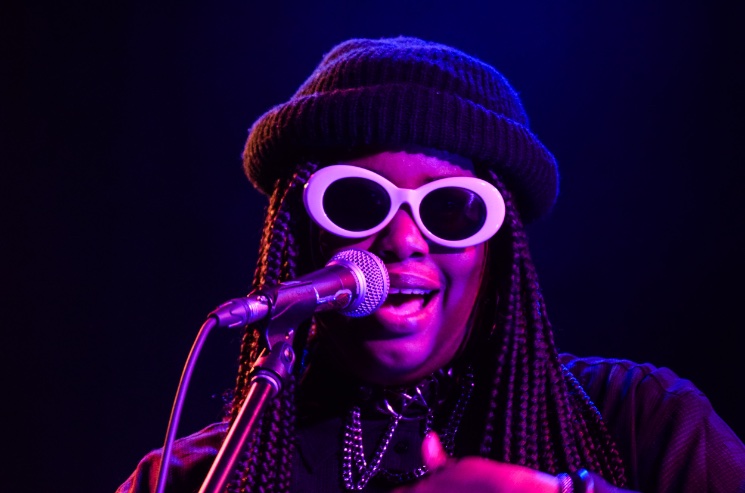 Nicholas Craven
After a series of short performances, it was great to have a more substantial DJ set included in the mix, courtesy of Montreal's drumless beatmaker extraordinaire Craven. After a stream of hip-hop classics with a few self-produced joints sprinkled in, Craven invited rapper Chung to the stage to celebrate her birthday and interpret their collaborative work. Misa followed suit and gave the audience a taste of sharp Francophone lyrics over the soul-laced Craven production. Veteran Jimmie D then took the stage and the DJ set got elevated to a mini rap showcase with MC/producer Mike Shabb acting as hype man all night. Catching up with Craven the following morning at his Cooking Beats production seminar, he let slip that he was hopping on a plane to Detroit to work on the second volume of his collaboration with rapper Boldy James — Craven never stops moving. 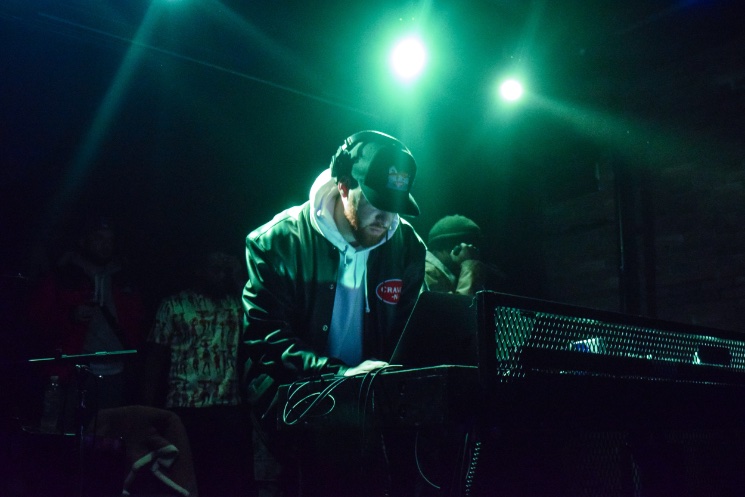 Lary Kidd
With fans packed at the front of the stage and his merch table nearly sold out before he'd even started, Lary Kidd delivered on the hype by incorporating classics with new, unreleased material. With producer Ajust backing him up, Kidd was jovial and confident throughout the performance, playing in sharp contrast with his often bleak songs and themes. Legendary Muzion founder Imposs came to perform something old and something new, while former partner Loud joined Kidd later on. The surprise reunion generated a seismic crowd reaction, and the duo performed some of their older LLA material, matched in singalong fashion by the energetic crowd. Kidd has had major pre-pandemic performances at Club Soda, and this was another one for the history books.

Clay and Friends
On M for Montreal's second day, focus was on the legendary Club Soda and the Marathon showcase taking place. The artists on the bill had all collaborated with one another in the past, but the crowd was really there for high-energy funk outfit Clay and Friends. Mike Clay and his musical companions had already sold out this venue twice in the past, and you could feel that home field advantage throughout their electrifying set. Known for their groovy energy and crowd interactions, it was one of the festival's most engaging performances. Newcomers in the audience were no doubt swept into the band's energetic tide while the local fans were singing along word-for-word all night long. 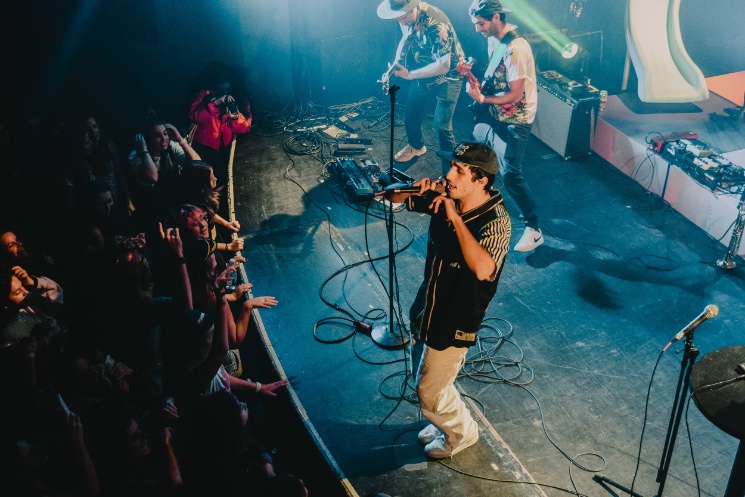 Zach Zoya
As if embodying a fusion of both groups performing with him that night, Zach Zoya came onto the stage with a serene presence and the backing of the EKG Band (this time in their full-band configuration). Off the strength of his chart topping single "Start Over" and years of touring, Zach Zoya knows how to put on a show — the crispiness and fluidity of his live performances can't truly be felt when refracted through a social media clip, and Zoya took the crowd at Club Soda to church. In the tradition of the icons that inspired him, Zoya opened his heart and delivered an emotionally rich set of pop-tinged R&B bangers that rose in an incredibly satisfying crescendo.

Magi Merlin
It doesn't get any more Montreal than an alt-R&B performance smack dead in the middle of downtown. If you had the chance to cross Saint Laurent after the Marathon show at Club Soda, you were in for a treat as Magi Merlin (newly signed to Bonsound) let loose. With bassist and beatmaker FunkyWhat celebrating his birthday, the whole showcase was a celebration. Merlin even invited fans on stage to provide backup vocals, and the experience was mesmerizing despite a somewhat thin crowd. After representing Montreal at SXSW and reconnecting with some of the same crowd at M for Montreal, it feels like big things are on the horizon for Magi Merlin, whose blend of punk energy, lo-fi beats and soaring vocals can leave no one indifferent.

Emma Beko
M for Montreal usually follows a tight, to-the-minute schedule, which is why it was surprising that Emma Beko's brooding set started late. But the extra time did allow for the large venue to fill substantially, giving Beko the chance to connect with an even larger audience. With an assortment of plush toys ornamenting her mic stand, Beko launched into her nostalgic and emotional repertoire. The eerie beats and raw vocals meshed perfectly with the eye-catching set design, and the singer's authentic approach translated effortlessly to the receptive crowd, who gave her a warm round of applause after her short set.

SLM
After her DJ warmed up the crowd, the energy level was raised a notch when rapper SLM came on stage accompanied by her dancers. SLM anchored her performance with her sterling hooks and masterfully pulled off the challenging dance/rap balancing act to a tee. However, it's her vicious delivery and fast-paced rapping that's most impressive, and the members of Drake's OVO team in attendance seemed to be taking notice.

Kartel Music Group Showcase: Tizzo, Lebza Khey, Cupidon and Salimo
Usually on the periphery of the industry, the Kartel artists showed that they have nothing to envy from more mainstream acts. Young rapper Salimo, who just released a new album, put on a clean performance undoubtedly shaped by his various summer festival slots. Cupidon and Lebza Khey showcased their undeniable chemistry, tearing through their collaborations and solo hits. Finally, main act Tizzo brought his entourage onstage and recreated the massive ad-lib driven shows that he's become known for. Le National had never really hosted hip-hop shows before, and the jubilance and hype of this showcase may mean that M for Montreal's booking is pushing progress in the local scene in unanticipated ways.