By Corey Henderson
Published Mar 08, 2016
This year marks the 25th anniversary of the formation of Sloan, the Halifax-turned-Toronto power-pop quartet. If you told them in the early days that they'd be together this long, I'm sure you'd have been greeted by a pretty big laugh. From noise rock darlings courted by major American labels (Geffen, Sub Pop) to arguably one of the most important Canadian rock acts of all time, Sloan have never really followed the classic rock narrative. In fact, they almost ended before they really had a chance after the band nearly broke up following their sophomore album — an album that would solidify their success in Canada.

Eleven albums later, Sloan have stayed the course. Every member still has an equal share in the writing of songs, trading instruments and lead vocals on stage. It doesn't really seem like they are going to stop any time soon. Chris Murphy has begun performing with TUNS, a trio of former Halifax rock greats Matt Murphy (Super Friendz) and Mike O'Neil (the Inbreds).

With such a long career, and a sizeable output of music, it's difficult to know where to begin with such a legendary cult band. Thus, we present the Essential Guide to Sloan. 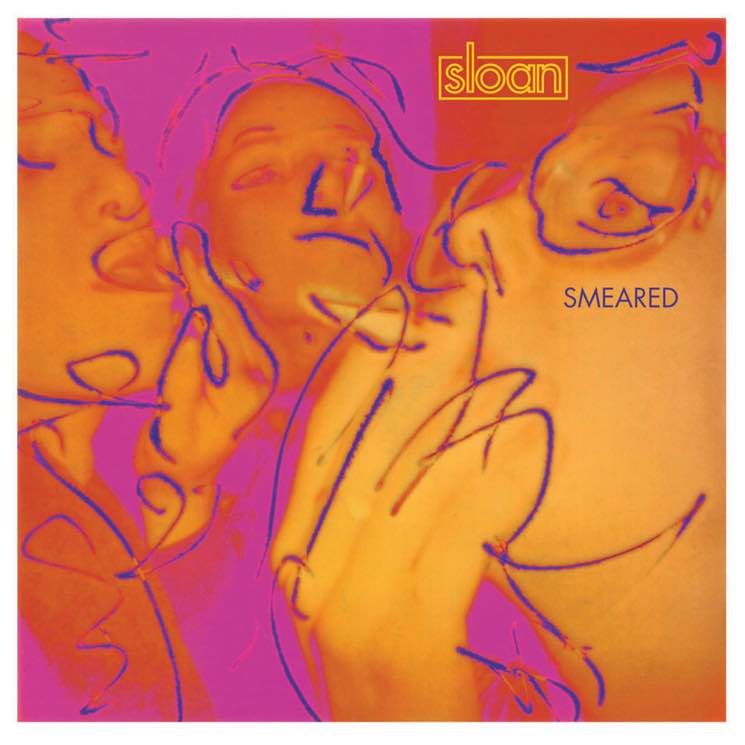 Their first full-length release, Smeared, is Sloan in their fuzzy, shoegaze prime. Kicking off the record is the song that made Sloan a force to reckoned with in the early '90s rock scene, the silly and sad "Underwhelmed." Drawing inspiration from two former relationships, this is a topic from which Murphy would mine a number of great songs. The lyrics are biting, filled with jabs at both former loves as well as Murphy himself. Sonically, it's fuzzy, almost droning with the same riff chugging along the entire time. Smeared also contains Sloan's first foray into power pop, the style that would be cemented on their following records. "500 Up" has an insanely catchy riff, and crisp and clean three-part harmonies on the choruses, only very rarely veering back into the noisier sound of the record. 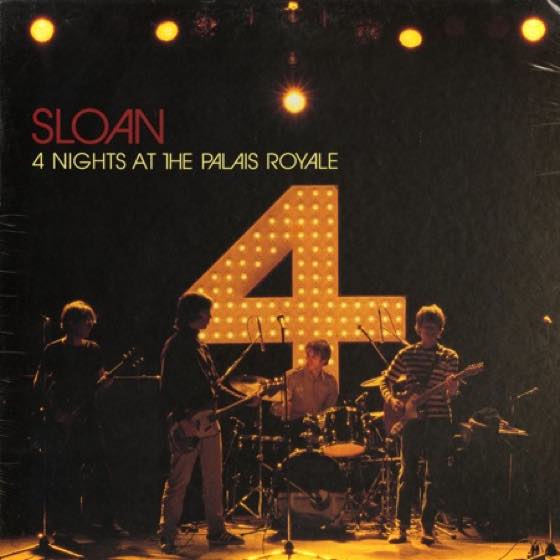 A live record can be a gamble even at the best of times. Luckily for Sloan, 4 Nights At the Palais Royale is a snapshot of a band at the height of their popularity and skill. Covering songs from their golden era, the record captures a lot of what made them so popular. It's just plain fun, loud and always just about to fall off the rails, with the audience eating it up, singing along and screaming all over the place.

Highlights include a blazing rendition of "G Turns to D" and an extended version of classic jock jam "Money City Maniacs," with a huge mid-song drum break from Andrew Scott and a ton of audience participation. 4 Nights demonstrates that Sloan are at their best when they're having fun. 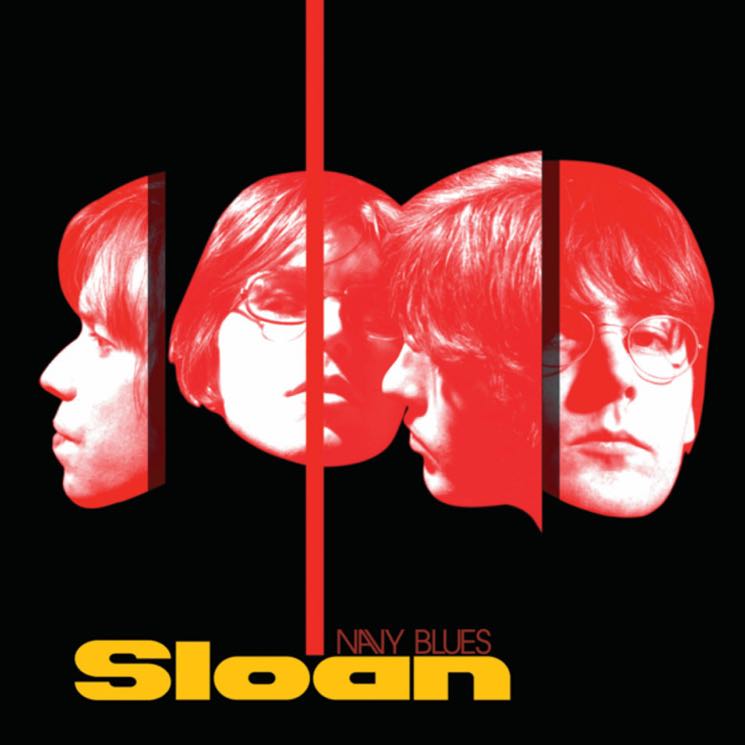 At this point, every hockey arena in Canada comes pre-loaded with "Money City Maniacs." Navy Blues is Sloan's '70s rock album, stuffed to the brim with huge riffs and wailing guitars. "Money City Maniacs" is a how-to guide on writing great pop rock, with a massive riff and that classic Sloan wit on lines like "If you admit that you're wrong, then we'll admit that we're right." Instrumentally, the song gives plenty of room for each player, with a groovy bass line bleeding into a wild guitar solo that's followed by one of the best breakdown/build-ups in rock history.

For all the straightforward rock tunes on Navy Blues, there is also a lot of whimsy here, like the mini rock opera that is "Suppose They Close the Door." Drenched in organ, it feels like three different songs stitched together, with the spooky minor key verses moving into upbeat pop choruses that make for one of the most dynamic songs on the record. Although piano is found on a lot of Sloan releases before Navy Blues, this is the record that really embraced the instrument, especially on the tracks written by Andrew Scott, adding an almost Magical Mystery Tour vibe to tracks like "Sinking Ships" and "Seems So Heavy."

Navy Blues also contains a quiet coda at the end of the album, aptly titled "I'm Not Through With You Yet." Stripped down to just acoustic instruments, it's a melancholy counterpart to the mostly bombastic album, showing that Sloan's best tricks are not the guitar solos or drum fills, but the deft use of emotion. 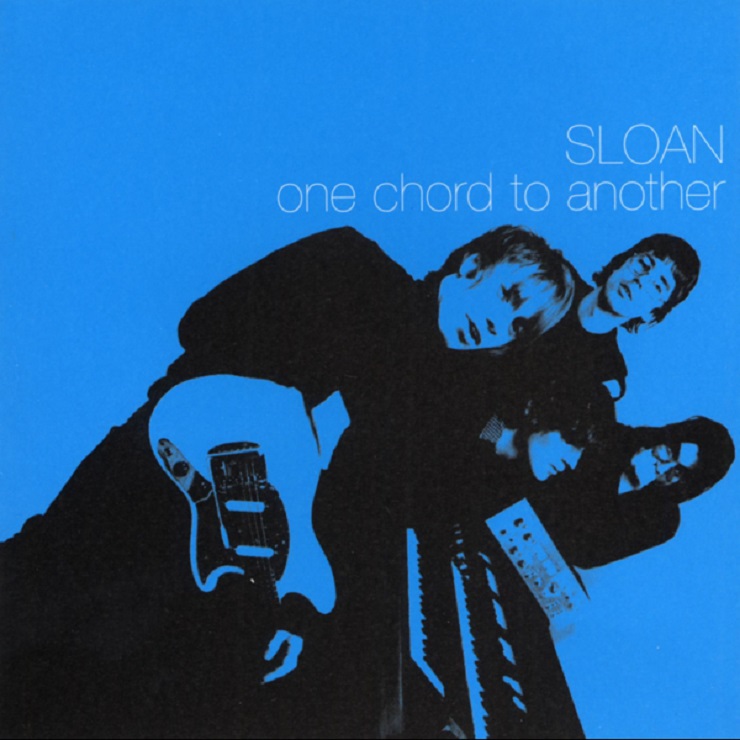 This is the record that almost wasn't. Coming together after the hiatus and potential end of Sloan after the Geffen ordeal, this record was recorded for $110,000 less than Twice Removed and in only two weeks — and it features Sloan at their most fun. It opens with the sound of a large crowd and the voice-over announcer welcoming Sloan to the stage on "The Good in Everyone."

The band discuss the same themes on One Chord To Another as they do on other Sloan releases — broken relationships, self-deprecation, and immaturity — but the songs have a more upbeat sense to them overall. Fuzz and dissonance are replaced with even more harmonies, acoustic instruments and heavy use of auxiliary percussion (maracas, tambourines). One Chord To Another also contains one of the best/worst breakup songs, "G Turns to D," on which the band blaze through a great pop riff while Murphy laments teaching his ex how to play guitar because now she writes songs about him. It's comedic in its hypocrisy throughout, discussing how he has already written songs about her, and especially when Murphy says that he doesn't really mind in the middle of a song about how much it upsets him. No one does passive aggression like Sloan.

Then, there's the overt Beatles influence all over the record. "Autobiography" could be the spiritual sequel to "A Day In the Life," while tracks such as "A Side Wins" and "Everything You've Done Wrong" might have sat nicely on The White Album. Jay Ferguson's "The Lines You Amend" has that distinct mid-period British Invasion vibe, falling somewhere in between Revolver-era Beatles and the Rolling Stones, with the jangly guitars, pop riffs and chugging bass line. 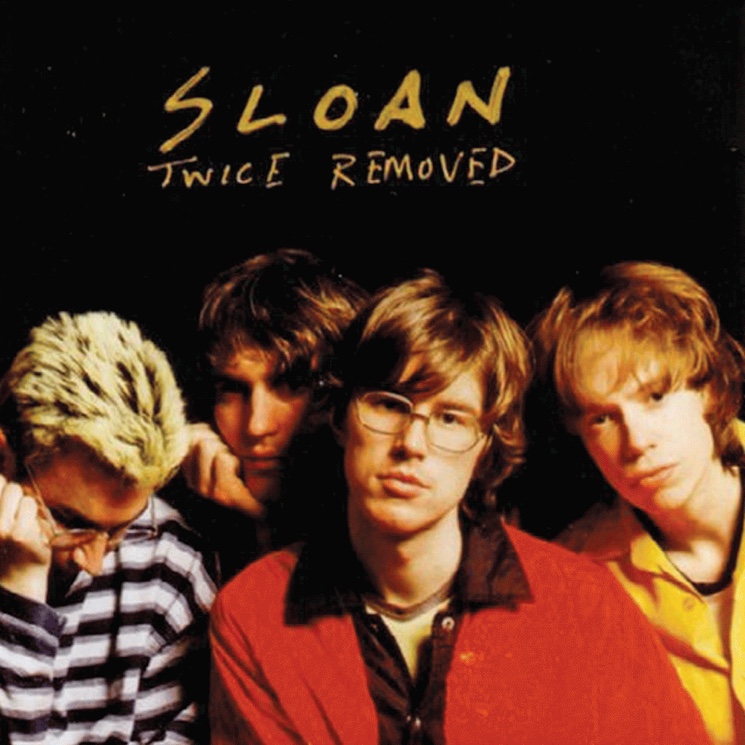 Two years after Twice Removed was released, it was voted the best Canadian album of all time by a Chart magazine readers poll, beating out stalwarts such as Joni Mitchell's Blue and Neil Young's Harvest. In the States, it was one of Spin magazine's "Best Albums That You Didn't Hear This Year." It was also the album that almost killed Sloan before they'd barely started. Geffen wasn't happy with the album they had recorded, which had traded in most of the fuzz and noise for pop hooks and vocal harmonies. With limited release in the States, Twice Removed went on to be a classic in Canada. It's Sloan's quietest record, replacing the droning distortion of Smeared with more dynamics throughout, such as on "Bells On," an ode to a former lover that goes from quiet and smirking to loud and upset. It's a record filled with sadness over lost friendship, broken promises and a feeling of not being part of the crowd.

"I Hate My Generation" seems to make public some of the tension that was going on during recording of Twice Removed, lamenting being lumped in with a bunch of people just because of the way they looked. What's noticeable is whenever they discuss the past, it is sonically happier, trading in melancholy guitar lines with bigger, more fun riffs, upping the energy and moving into a major key. This is followed up with the Andrew Scott-penned "People of the Sky," a Bob Dylan-esque pop tune that strings stanzas of poetry together with only a vocal refrain every few verses to break it up.

The highlight of the record is the oddly prophetic "Coax Me," a song about selling out for what you love, once again connecting the song to the backstage conflict going on with Geffen. Paired with a video reminiscent of the Ed Sullivan Show, "Coax Me" is particularly disarming, with its haunting vocal hooks and catchy pop chorus. It also shows a full sonic departure from Smeared, with the song featuring almost no distorted guitar. Murphy's lyricism is on point as well, penning one of the best lines in Canrock history: "It's not the band I hate, it's their fans." The song builds on the sense of isolation and separation that is found all through the aptly named Twice Removed.

What's truly amazing about Twice Removed is its timelessness. Coming on to 25 years old, it doesn't sound dated at all. The use of retro rock staples, mixed in with the slacker, lo-fi vibe of the '90s, gives the record a sense of being unstuck from time. 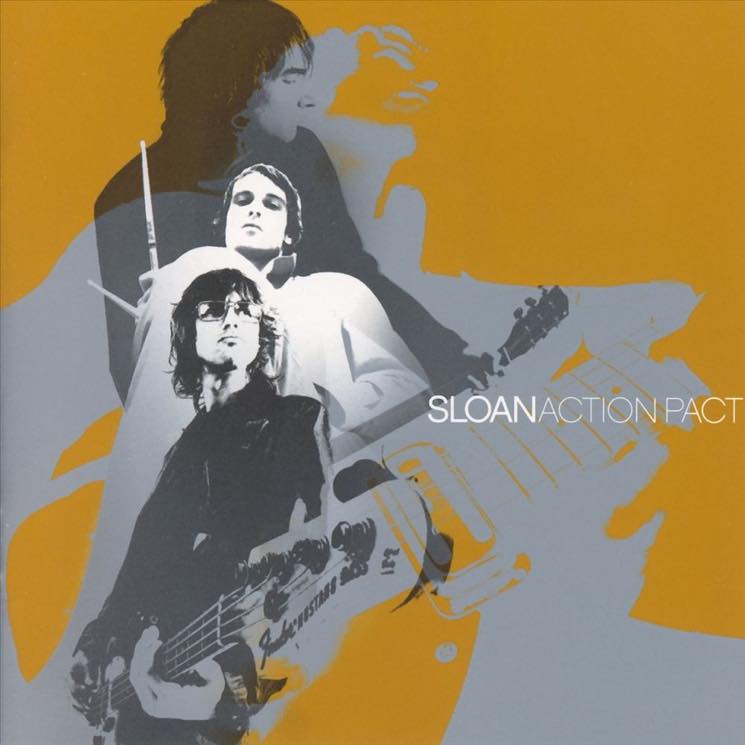 The decline of Sloan didn't happen overnight. After the golden era from 1992 to 1998, they released some fairly good records that all started to sounded the same after a while. That's when Sloan released Action Pact, which attempted to fight stagnation by getting rid of everything that made Sloan fun, focusing on them as a four-piece rock outfit. Action Pact is the only record not to feature a track penned by Andrew Scott, and it's noticeably lacking because of it. This was followed up by the overly long and aptly titled Never Hear the End of It in 2006. Thankfully, Sloan began touring Twice Removed in its entirety in the late '00s. 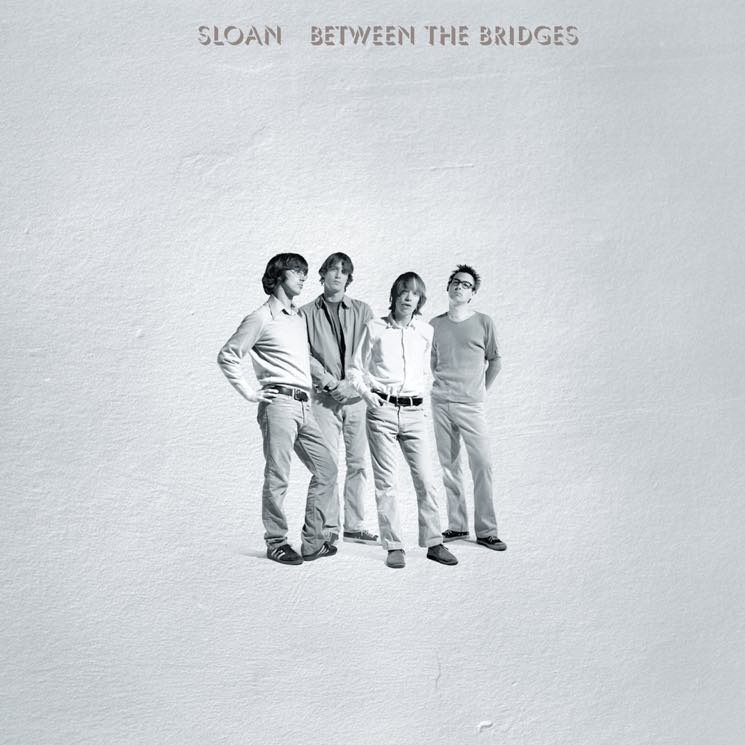 There are plenty of post-1998 gems in Sloan's catalogue. 1999's Between the Bridges is a wonderful walk through the Sloan story in the form of a rock opera on which the opening medley of tracks work almost as character studies of the quartet: Andrew Scott on the whimsical, piano-laden "The N.S."; Chris Murphy on the chipper, rollicking "Beyond Me"; Jay Ferguson on the soft rock-inspired "Don't You Believe A Word"; and Patrick Pentland on his full barrel banger "Friendship." It's also worth checking out 2001's Pretty Together, particularly for bad guy anthem "The Other Man," a song about Murphy's love triangle with Feist and another member of BSS. In the song, Murphy is unapologetic with his advances, urging us to see things from his perspective.

[Ed. Note: A previous version of this article referred to Sloan being dropped by Geffen. Exclaim! regrets the error.]