By Calum Slingerland
Published Jul 29, 2022
In a short documentary that accompanies Voivod's new box set Forgotten in Space, archival footage finds the metal band's Noise Records-era lineup of drummer Michel "Away" Langevin, vocalist Denis "Snake" Bélanger, guitarist Denis "Piggy" D'Amour and bassist Jean-Yves "Blacky" Thériault sitting down for a brief interview in what looks like a diner booth. Discussing their genesis, Langevin draws a throughline from the fantastical illustrations and imaginative world-building of his youth to the group's 1980s present as a progressive thrash powerhouse, while D'Amour reflects on their shared desire to move beyond the industrial surroundings of Jonquière, QC — which produces a third of all aluminum manufactured in Canada — to ply a different kind of metalwork. Noting the influence of classical and psychedelic music on their much more aggressive style, Langevin affirms to the interviewer, "There's no limits."

It's a homegrown heavy metal history that's still being written. In 2017, Voivod captured the Visionary award at Prog magazine's Progressive Music Awards, with Langevin telling the crowd it was the first award the band had ever won. Soon after, the band's 14th studio album The Wake collected Metal/Hard Music Album of the Year honours at the 2019 JUNO Awards. Fifteenth studio effort Synchro Anarchy came roaring into the world this past February. For Langevin, as told to Prog's Jerry Ewing for the Forgotten in Space sleeve notes, there is great enjoyment in how present day reverence and retrospective releases like this allow him to "blend the future of Voivod with the past."

Voivod's '80s heyday is where Forgotten in Space warps us, when the band had moved to Montreal following the Metal Blade Records release of furious 1984 debut War and Pain, sharing an apartment and continuing rehearsing and writing material for a follow-up. In the notes, Langevin recalls stretching social assistance and still being unable to finance the mixing of what would become their sophomore release. They would get back in the black through organizing the single-day World War III festival, which promised (per a promo poster) "seven hours of screaming metal, 12,000 watts of sound, 100,000 watts of lighting" to power their own performance, as well as the North American debuts of Celtic Frost and Destruction, and the Canadian debuts of Possessor and Nasty Savage.

As Langevin recalls, it was there that the band gave a cassette of their latest rough mixes to Celtic Frost bassist Martin Ain, who then made a copy for Noise Records founder Karl-Ulrich Walterbach. "All of sudden," he now notes, "we have a three-album deal with Noise." The tape that earned Voivod the contract would see official release in 1986 as Rrröööaaarrr, and was followed quickly by 1987's Killing Technology and 1988's Dimension Hatröss. These three formative releases capture a crew honing their live explosiveness to better serve their rapidly evolving compositional and conceptual ambition. Coupled with the global rise of thrash metal's popularity, and Voivod's own ascendance within hordes of metalheads inside and out of their own country, the band's Noise Records catalogue ultimately primed them to reach their commercial peak with 1989's Nothingface, released on MCA imprint Mechanic.

A brief look at Voivod's conceptual arc from their debut into the Noise years: a vampiric warlord awakens in the aftermath of nuclear destruction and hacks and slashes his way across the hellscape of Morgöth on War & Pain, and he begins his conquest of the survivors as Korgüll the Exterminator — now a figure akin to Iron Maiden's Eddie or Megadeth's Vic Rattlehead — from his impossibly armoured "Helldriver" tank on Rrröööaaarrr. Killing Technology saw him take his murderous conquest to outer space, while Dimension Hatröss chronicles his exploration of both an outer dimension and inner self. 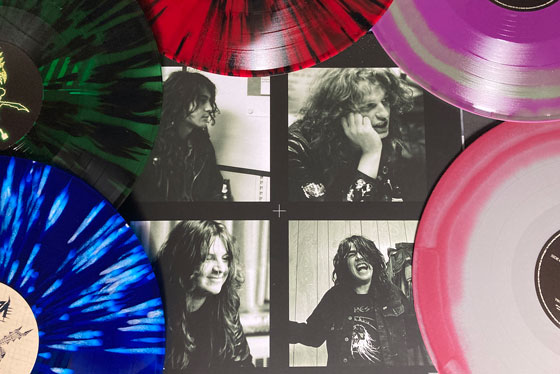 Forgotten in Space, arriving today via Noise and BMG in CD and vinyl editions, brings together Rrröööaaarrr, Killing Technology and Dimension Hatröss for the first time since each were given the remastered reissue treatment in both formats in 2017. Accompanying the studio efforts are the debut vinyl pressings of 1986 live recording No Speed Limit Weekend (previously cassette-only and also found on the 2017 Rrröööaaarrr deluxe CD release as Spectrum '86), and eight Dimension Hatröss demos that were previously found on a DVD included with that album's 2017 deluxe CD release. The box also packs in 20-page booklet Cosmic Drama, containing Langevin's sleeve note reflections and a wealth of photography, the Chaosmongers DVD that includes the short doc, a previously unseen concert in Chicago and audio of their World War III festival set, and a Korgüll-shaped USB drive containing MP3s of the albums and demos at a sample rate of 128 kbps.

The set also comes with an exclusive art card signed by Langevin, and knowing the importance Voivod place upon the visual elements of their oeuvre, it should come as no surprise to learn Forgotten in Space has been held to a similar standard. Opening the pizza box-style lid of the set's vinyl edition takes us into the cockpit of the foil-printed, spot-varnished spacecraft piloted by Korgüll on the cover — its weapons targeting Earth, of course. Remove the Cosmic Drama book and the stack of vinyl, and a dedicated slot for the Chaosmongers DVD is revealed, its cover styled like a maintenance hatch that reveals the Korgüll-shaped USB when the digipak is removed. Take out that final piece of the set, and an image of a bright red nuclear launch button is found in the "core" of the ship's dash, fittingly branded "Killing Technology."

The records themselves have also been treated accordingly. Rrröööaaarrr, No Speed Limit Weekend and the Dimension Hatröss demos have all been pressed on stunning splatter vinyl, while Killing Technology and Dimension Hatröss arrive in eerie, dual-colour swirls. The studio albums arrive with faithfully reprinted jackets and inner sleeves featuring handwritten lyrics and photography, the 12-inch size an ideal canvas on which to examine Langevin's imposing, impeccably detailed cover illustrations.

The aforementioned 2017 CD and 180-gram vinyl reissues of Voivod's trio of Noise albums featured audio remastered by Andy Pearce and Matt Wortham, and both are credited in the engineering role again in Forgotten in Space. While we aren't hearing a vinyl-specific master, like the one Tool's recent vinyl box set received, it isn't as if we're headbanging from a perfectly treated room with the highest fidelity gear imaginable. These records were played using a Technics SL-5200 direct drive turntable with an Ortofon 2M Red cartridge, paired with a NAD Model 60 amplifier (loudness off, treble and bass knobs neutral) driving a pair of Totem Mite bookshelf speakers. 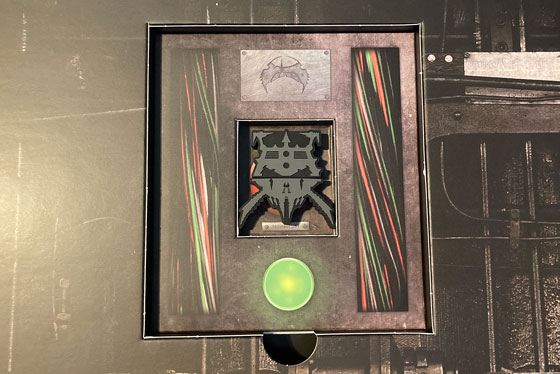 A preliminary bit of homework comparing CD rips of Pearce and Wortham's 2017 remasters against digital copies of earlier CD pressings for all three studio albums revealed, to my ear, an overall sharper, more trebly mix and welcome improvement of instrument separation within the soundstage. Thankfully, those characteristics carry over to the coloured, standard weight wax of Forgotten in Space, greatly benefiting an album like Rrröööaaarrr where moments of reprieve from the thrash onslaught come few and far between. That isn't to say the recording has lost its defining punk edge; it's fully intact as Bélanger's scraping howl soars cleanly, prominently over his band on "Korgüll the Exterminator," while Langevin's punishing double kick is a force throughout. The fidelity of Voivod grew considerably with Killing Technology and Dimension Hatröss, both recorded in Germany with producer Harris Johns, who by this point had cut records with Helloween, Kreator, Tankard and others. For both these albums, the vinyl was quiet and had no surface noise intruding on the band's marked compositional advancements. With box sets like this, including audio like the Dimension Hatröss demos and No Speed Limit Weekend is a move for the band's biggest fans, and what they respectively offer in their new vinyl form are glimpses of a group putting their heads together to push the limits Langevin alluded to in that interview clip, and ensuring audiences are blown away by the fury and and force with which they play.

Visually, the Chaosmongers DVD is a gripping extension of Voivod's metal might captured on wax, its mini-doc mix of taped live performances, promo videos and behind-the-scenes snippets cut together with a rawness befitting of the band's music. Video of Voivod playing "Korgüll the Exterminator" live in Long Beach finds them geared up with a wealth of studded leather accessories, performing with enough energy to obliterate a thousand planets. A clip of them launching into "Overreaction" at the Rex Club in France might be the most excited Parisians have been to see Quebecers at any point in history, while a 1987 performance of "Cockroaches" in Switzerland is highlighted by D'Amour's dazzling solos. The audio quality is steps above that of the tape rips for select shows you'll dig up on YouTube, and when it comes to video, you'll feel like you're in the room working the Handycam yourself. The constant is that every one of these performances is clearly packed, demonstrating the world's appetite for thrashers of all kinds.

Going behind-the-scenes at a video shoot for "Ravenous Medicine," we see Langevin playing through his drum parts in front of a blue screen — his live energy dialled back only slightly — before we get shown the completed visual, with vocalist Bélanger screened into an animated setting of a hospital with hideous monsters and scheming doctors. Later, a promo video for "Tribal Convictions" shows a greater grasp of effects, playing out like a proto-lyric video as Bélanger's words get the alien-green, sci-fi overlay treatment onscreen. Later, we see him show off his acting chops in a segment for a "Psychic Vacuum" video, shot against an illuminated backdrop adorned with Langevin's recognizable artwork.

As Voivod's most elaborate, detailed compilation release to date, Forgotten in Space gives a comprehensive look at a remarkable three-year period of creation and development for one of Canada's singular metal bands, a span that would ultimately cement their legend status across galaxies.