​The Weeknd Just Registered the Song Title "Like Selena"

By Sarah Murphy
Published Nov 26, 2019
The Weeknd has been teasing a new track called "Blinding Lights," but apparently there's more to come, as he's registered the song title "Like Selena."

According to ASCAP (the American Society of Composers, Authors and Publishers), the Toronto singer (born Abel Tesfaye) is listed as the writer and performer of a track called "Like Selena," ET points out.

You can see that for yourself here or via the screengrab below.

It's likely a reference to his ex-girlfriend Selena Gomez, who recently released her own breakup ballad — about Justin Bieber.

Tesfaye previously hinted at his relationship with Gomez in the song "Call Out My Name." Many think a certain line — "I almost cut a piece of myself for your life" — is about Gomez's kidney transplant surgery that she underwent around the time their relationship ended.

After the pair split in 2017, Tesfaye rekindled a relationship with his former girlfriend Bella Hadid.

Stay tuned for updates on new music from the Weeknd, as well as if he ever has plans to actually release a song called "Like Selena."

For now, preview the new song "Blinding Lights" and expect more from the Weeknd to arrive later this week. 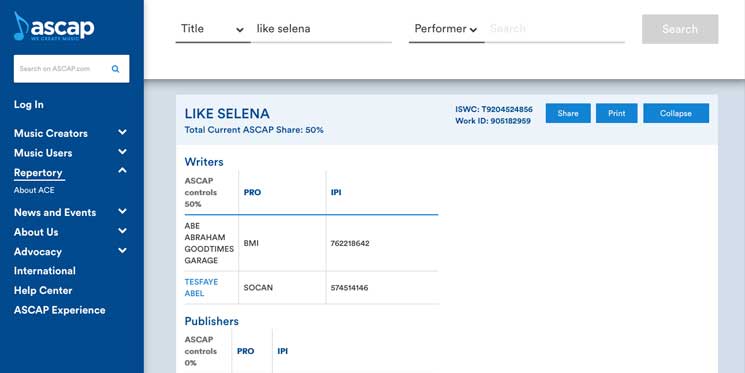