"At this point, it's mad unprofessional, and we feel disrespected"

By Calum Slingerland
Published May 09, 2019
Fans concerned with Gucci Mane's eligibility to cross the Canadian border for his first-ever tour of the country had their worries somewhat put to rest this week with the news the Atlanta rapper had been granted a temporary work permit despite his lengthy criminal record. But it now appears there's plenty of tour drama behind the scenes, as opener Merkules has dropped off the tour just days before it's set to begin.

Broadcasting on Facebook Live last night (May 8), the Canadian rapper revealed he will no longer be taking part in the fast-approaching Gucci Mane tour, citing a "lack of organization" and "lack of professionalism" from tour management and organizers when it came time to deal with contracts and compensation.

Merkules recalled how he and his management began hashing out details in February of this year, ahead of the tour's March announcement. "Shit was cool at first, and eventually there was a contract that we needed to get signed," he explained, recalling how his camp gave tour promoters the benefit of the doubt when signed contracts were not returned to them.

"Time went on, and I understand that Gucci is a much bigger artist than, say, a Merkules is. I also understand that if I was to go on that tour, I would playing rooms that are much bigger than I'm used to playing," he continued. "With all that being said, the contract never got signed, I never got my deposit sent to me."

Despite his camp's attempts at keeping good faith, Merkules explained, "We got to a point where we were so stressed out and frustrated that we said 'you know what, its time that we stick up for ourselves,' and we said... you have a 48-hour deadline. You're going to pay us and send us our contracts back, or we're going to pull out of this tour because this is bullshit. At this point, it's mad unprofessional, and we feel disrespected."

He expanded on the back-and-forth between his management and the tour promoters as follows:

The gentleman I was talking to said 'your deposit's going to come Monday.' Monday comes, no deposit. My management reaches out to the guy, who says 'okay, listen, we need one more day, it's coming Tuesday.' Tuesday comes, still no deposit.

Having not been paid, Merkules explained how his manager contacted promoters and talent buyers in the same cities Gucci Mane is set to perform in to book his newly announced "The Plan B Tour," which he will now be doing instead of the trip with Gucci.

"I don't know if the Gucci tour is still happening with or without me," Merkules explained. "Everything's been so messy, and I know it's not only on our end."

As of press time, support acts August Alsina and Peter Jackson have yet to indicate that their status on the tour is in jeopardy. The pair are still advertising meet-and-greet packages for tour stops through Facebook, though Merkules' management tells Exclaim! Alsina is no longer part of the Canadian tour.

It wasn't all bad news for Merkules fans. The rapper also used his live stream to drop his "Want That Smoke Freestyle," which finds him teaming up with Shaquille O'Neal.

You can find Merkules' "Plan B Tour" dates below, where you'll also can find the Facebook Live broadcast and "Want That Smoke Freestyle."

You can find Gucci Mane's Canadian tour dates over here. Right now, the tour is set to kick off on May 15 in Halifax. 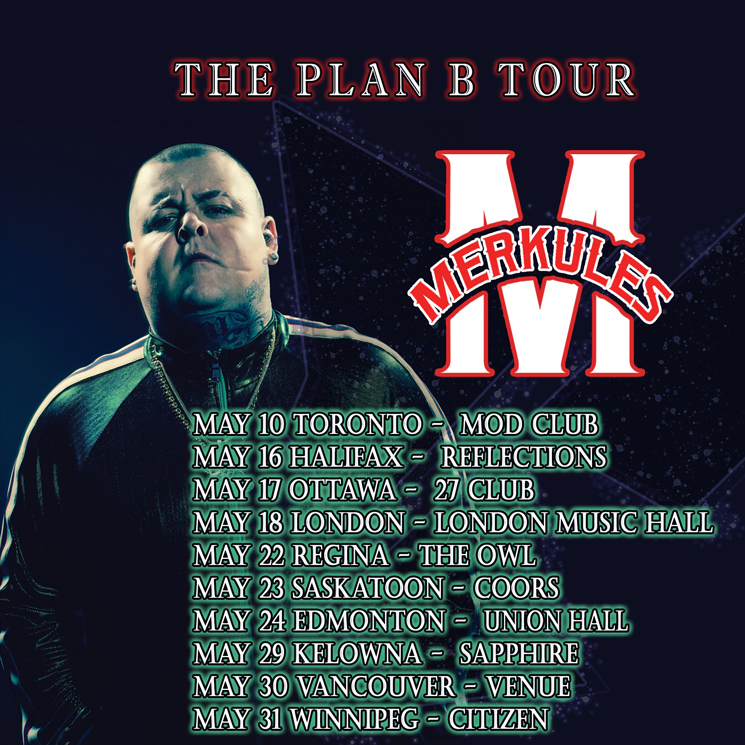