The pair of Toronto events are scheduled for this summer

By Allie Gregory
Published May 13, 2020
July Talk have revealed plans for the "first of its kind" Canadian drive-in concert events, which will also mark their first performance since physical distancing measures took effect.

The band will perform live on two nights this summer from a theatre near Toronto. The pair of events are scheduled to take place on August 12 and 13, for which the band have already launched a "save the date" website. While they promise the shows will see the premiere of new music and provide a sense of "togetherness of a shared concert experience," rest assured that it will proceed "in compliance with government health and social distancing protocols."

So far, the location has yet to be disclosed. Also, July Talk have not announced any details about ticket packages due to the ongoing and evolving state of emergency in the wake of the coronavirus pandemic.

UPDATE (7/16, 2:50 p.m. EDT): The location has now been confirmed as the Stardust Drive-In in Sharon, ON, just outside of Newmarket. Tickets go on sale tomorrow (July 17) at noon local time right here.

Read their full statement below:

We've been working on this idea for some time now and it feels like it's going to be a pretty special event. The thought that we will be able to perform and feel the audience's company again is just too much, we can't contain our excitement. We're going to premiere some unreleased music videos and play a full scale 90-minute live set where the audio is broadcast onto your car radio and the drive-in screens play a live multi-camera feed as well! Car horn applause anyone?!

July Talk are on the verge of releasing their new record Pray for It. The album will be released prior to their newly scheduled live event, on July 10 via Sleepless Records/BMG.

See the event poster below. 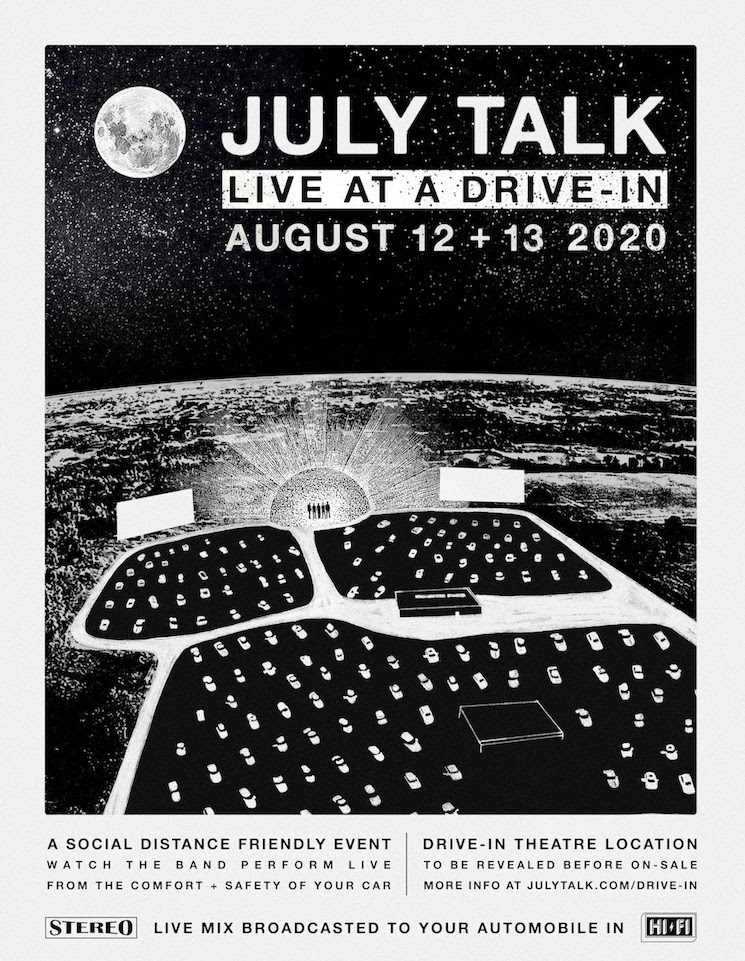