By Sarah Murphy
Published Oct 04, 2019
The Fab Five from Netflix's Queer Eye shared the sad news yesterday (October 3) that their frequent co-star Bruley has died. The French bulldog was 10.

Bruley's owner, producer Michelle Silva, confirmed that the dog died of a heart attack, following a series of heart problems. As she put it, "He just had too much love and heart for his physical body."

Bruley the Frenchie became a mainstay on Queer Eye, appearing at the Fab Five's Kansas City loft where the group watches footage of their recently made-over "hero."

In addition to Silva's own heart wrenching tribute post, a number of members of the Fab Five have shared their own memorials and messages of love on social media.

My whole heart. My love bug. My best friend. My constant. My soul mate. My everything. I brought him home when he was 9 weeks old on a rainy day in New York City. Ten years later on a rainy day in LA, he passed away in my arms on my bedroom floor. Bru had been suffering from heart problems, and an instant heart attack was a possibility. He just had too much love and heart for his physical body. It all happened so fast, but I held him as he took his last breath, and I was able to tell him I loved him the very most. I told him everyday I loved him more than anything in the world, and I reminded him of that over and over as he slipped out of this life. My best friend and boyfriend held us both. He gave me more than I could have ever given him, and I was able to thank him for allowing me to be his mom. He chose me. We got to experience so much together; he loved traveling on planes and looking out the window! He was the ultimate copilot in the car when he wasn't dangerously sprawled out across my lap as I drove. He was so very loved by my family and friends and even "non dog people." He mastered the "jump kiss," and I always had to explain to people that he wouldn't buy you dinner first, he just went in for the full make-out. In the last year of his life, he found fame! Over the course of 16 episodes of @queereye, in just a few moments on screen, you guys all got a glimpse of the Bru I knew and loved. He was hilarious, stubborn, sometimes inappropriate, and always a sucker for a snack. He was pure love. It's been so fun capturing his spirit and sharing more with you all here. I've taken a few days to process and grieve and figure out what's next. I've realized, I don't want to stop sharing the best of Bru. I also want to show you a little of what it was like the last few months dealing with an ailing dog in heart failure as more and more dogs are being diagnosed with the same issues. I was so close to completing Bru's website with long-awaited merch. I'll get there in time. I've also been exploring non-profit opportunities and getting involved in bulldog rescue. There is so much Bru inspired, and it's so much bigger than I even realized. (Cont. below)


RIP to our dear bru bru! Each time we returned to our loft in Kansas City you were always there to greet us and that brought us so much joy. We hope you have an endless supply of treats to munch on 🦴💖 pic.twitter.com/gL4bf4RCGp

RIP my furry little friend. You brought joy to so many with your jump kisses, grunts and even your farts 💨. You were the best little sidekick we could have had. You will be very missed by all including your mama @tinsely_ who my heart goes out to right now. I love YOU #bruleybru #queereye 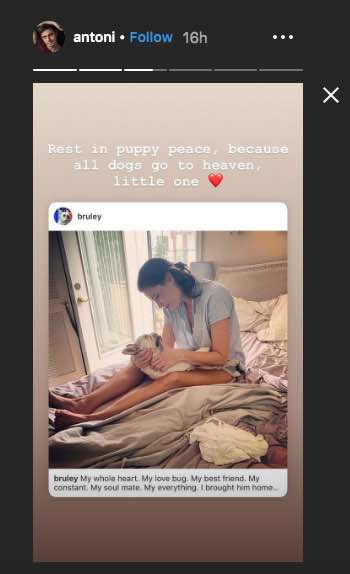