By Alex Hudson
Published Oct 06, 2020
The White Stripes are finally getting a greatest hits album. The logically titled The White Stripes Greatest Hits will be out on December 4 in a standard edition via Third Man/Columbia, as well as in expanded vinyl form through Third Man's latest Vault subscription package.

The double-disc album will contain 26 songs, although the band haven't revealed the tracklist for this version yet. So far, they've announced just one inclusion: "Ball and Biscuit," a track from 2003's Elephant that wasn't a "hit" by traditional standards, but was a live standout and fan favourite.

To celebrate, the White Stripes have shared a live video of "Ball and Biscuit," filmed in Tokyo on October 22, 2003. See that below.

As for the expanded Vault release, it will come with an extra third LP of scattered B-sides. This third record is pressed on splattered red, white and black wax (which they're dubbing "detonation" vinyl), while the other two LPs are pressed on red and white vinyl, respectively. You can see the tracklist for that third bonus disc below.

The album cover of the standard version is above, while the illustrated Vault version (by frequent White Stripes collaborator Rob Jones) is below. This Vault set will come with three extra Rob Jones prints and lyric magnets. The signup deadline for the Vault is October 31.

In an era of streaming where the idea of a "Greatest Hits" album may seem irrelevant — that an act's most streamed songs are considered their de facto "hits" — we wholeheartedly believe that great bands deserve "Greatest Hits" and that a large part of Third Man Records' and the White Stripes' successes have been built on zigging when the rest of the music business is zagging. Thus, for a great band with great fans, a greatest hits compilation for the White Stripes is not only appropriate, but absolutely necessary.

As part of the December release of Greatest Hits, the White Stripes are updating their YouTube channel to include all of their music videos in HD. The band have also joined Instagram at @thewhitestripes. 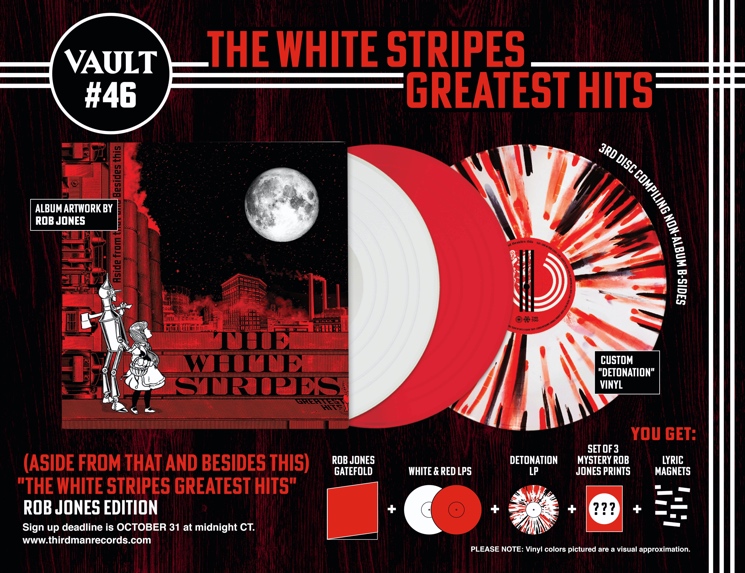