An Essential Guide to Venetian Snares

By Daryl Keating
Published May 03, 2016
We've been inside his home studio in Winnipeg and soaked up his last two albums, Traditional Synthesizer Music and My Love Is a Bulldozer, with all we could muster, but still Aaron Funk, a.k.a. Venetian Snares, remains as mysterious as ever. Over an 18-year career, with a staggering two dozen (or more) LPs and nearly as many EPs, Funk's modus operandi has shifted dramatically, but can still be divided into two pretty broad camps.

On one hand, you have the frenzied drum'n'bass with which he's generally associated; on the other, a more reflective, cerebral take on glitch. Both sides of this gnarled coin need to be taken into account in order to fully understand the true talent of this underappreciated Canadian genius.

From the vicious hammering of his early work to the sonic experimentations that followed, Funk has aged marvellously as an artist; Traditional Synthesizer Music may just be his best work to date, but we'll let its modular circuitry snuggle into our brains just a little while longer before looking at it in terms of his back catalogue. For now, we're looking back at the wayward junglist's shining moments. Here's our Essential Guide to Venetian Snares. 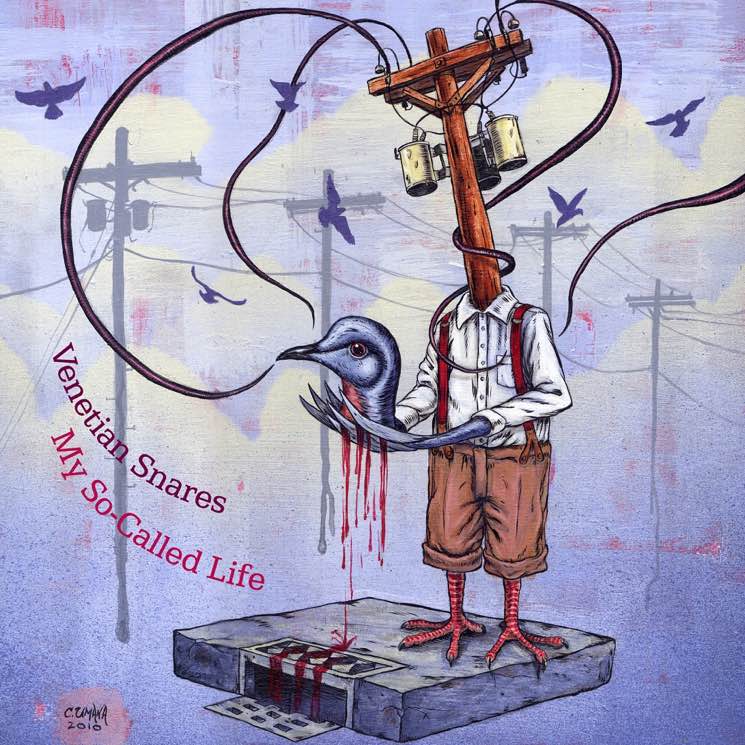 A staunch breakcore fan once told me that My So-Called Life was "a bit too poppy" for his tastes. Needless to say, I proceeded to laugh in his amply pierced face.

In retrospect, and considering the span of the genre, though, I'd probably retract that laugh somewhat. My So-Called Life still isn't by any means poppy — it would send most people running for the hills — but let's grant that the album's melodies are undeniably playful. On the whole, it's actually pretty hilarious, too; the overarching theme and impossibly high-pitched vocals of "Who Wants Cake?" never fail to coax a smile, and how can you not burst out laughing at "Welfare Wednesday," where everything from egg salad sandwiches to impressive moustaches are "in your punani"?

Of course, it's not all laughs: "Ultraviolent Junglist" is just as evil as it sounds, and runaway highlight "Goodbye9/Hello10," though probably the most straightforward track on the album, is nevertheless a force to be reckoned with. 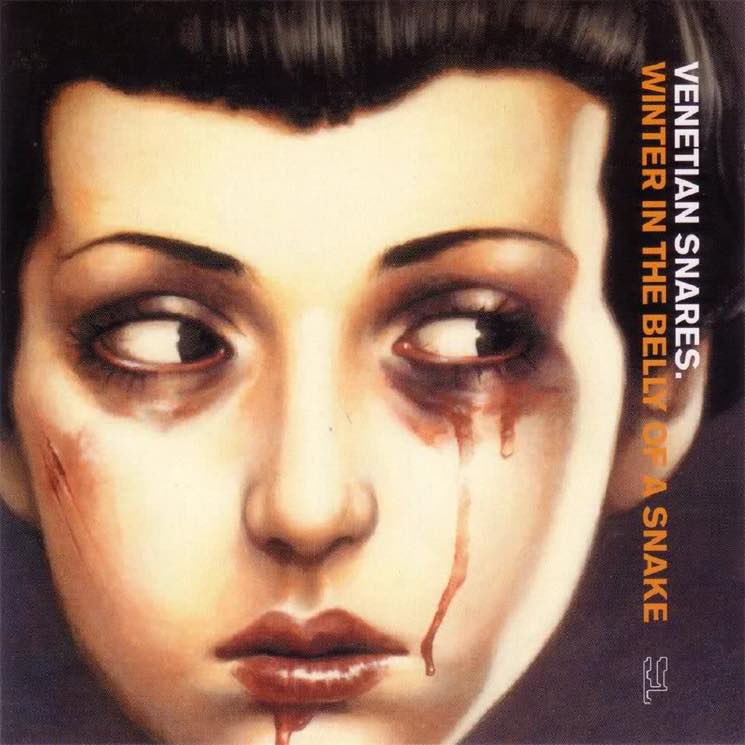 Hugely different from My So-Called Life, this record is subdued and quite introspective on the whole. It might not be the first album many would reach for when deciding to put on a Venetian Snares LP, but the overall aesthetic — sonically akin to wires gently popping out of their sockets — is just too good not to highlight. "Tattoo" has a blend of elements that Funk explored later in detail — the modular wanderings of Traditional Synthesizer Music, the string arrangements of Rossz Csillag Alatt Született — but Winter in the Belly of a Snake is one of the first instances of Venetian Snares dabbling in the poignant and beautiful. "January," for example, has the lyrics "I realized that if my body broke, I would break into blossom," a potential nod to James Wright's poem "A Blessing."

Musically, it strikes a similar chord, as some of the flurries on "Suffocate" are enough to induce little joyful spasms in the listener as they travel from your earlobes down your spine, while something like "Warm Body" is just synth magic. It's even got a severely non-rock version of "She" by the Misfits on there, just to keep you on your toes. 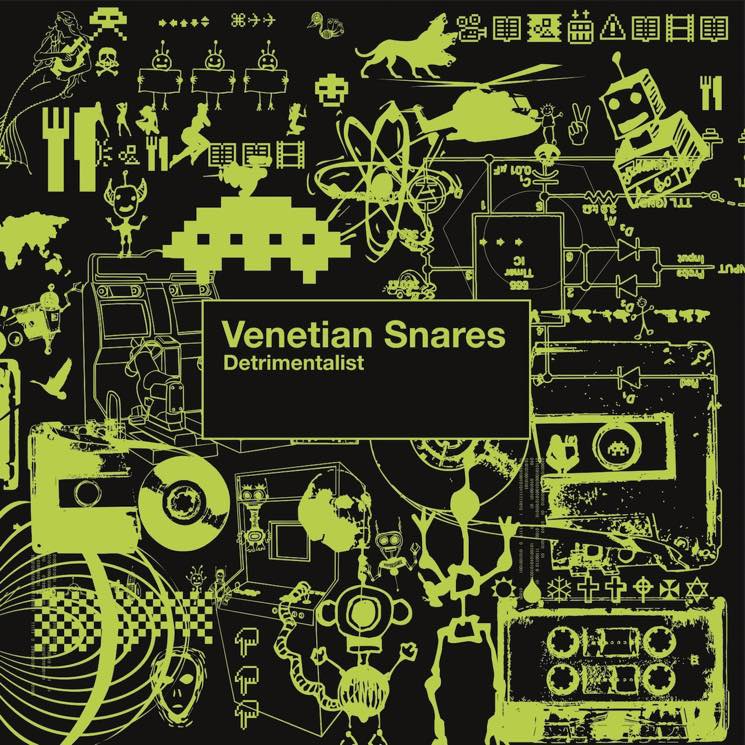 While you really do have to be in the mood for this album, when that mood arises, there's really nothing else like Detrimentalist. There's something about the potentially unseemly mix of '90s hardcore, dub squelches and breakneck percussive onslaughts that somehow comes together into a full-fledged beast here; it's as if Funk took all the elements of early rave music and pounded them into a working breakcore model.

This might sound tacky, and in a way it is (in the best way possible), but there's far more than first meets the ear here. The drum programming, for one, is out of this world, scarcely matched anywhere else, let alone on another Venetian Snares record, and the seamless blend of acid and ragga on some of the tracks is, really, something to be marvelled at. It's even had some time in the spotlight, as House of Cards fans might remember "Sajtban" from a second season episode. Netflix notoriety or no, Detrimentalist deserves some recognition, if for nothing else than its sheer brazenness. 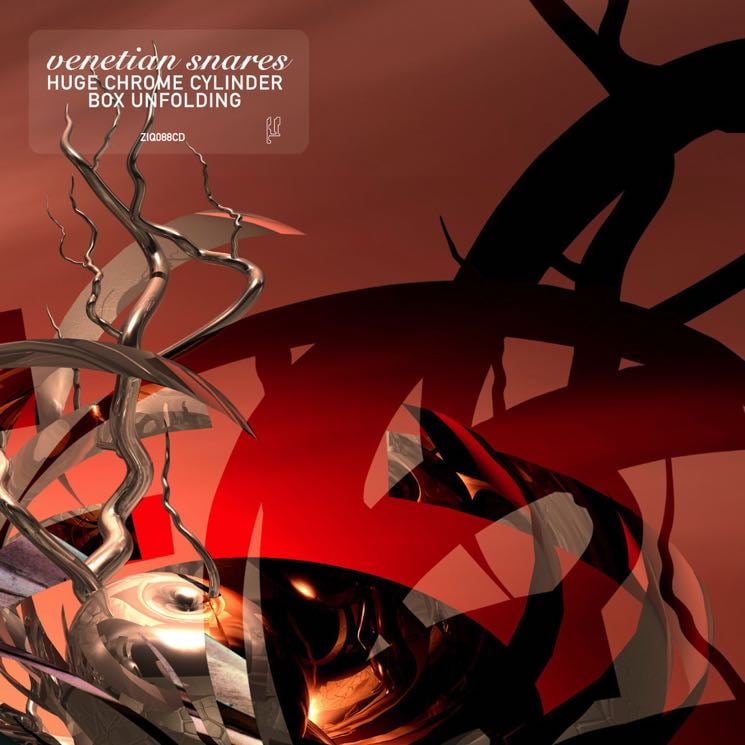 Huge Chrome Cylinder Box Unfolding is another seldom-discussed masterpiece from Venetian Snares, perhaps because, like Winter in the Belly of a Snake, it finds Funk leaving the savage breaks that he's normally associated with at the door. Instead, we're treated to one of Snares' most melodic records to date, but one that's also steeped in complex glitch and IDM. Huge Chrome Cylinder Box Unfolding was apparently recorded on a 12.6 surround sound system at Naut Humon's Recombinant Media Labs studio in San Francisco, where each blip and creak could materialize at different points surrounding the listener.

Replicating this at home isn't really an option, but there's definitely something lingering from that initial recording — even in stereo, "Ion Divvy" still sounds like multiple machines having a full, intelligent conversation, for example. A lot of the time your, brain in playing catch-up with this record, desperately trying to absorb the digital shards that have just burst in and out of existence. "Keek" and "Cadmium Lung Jacket," especially, leave you in a heap of confused admiration. Yet HCCBU is also pretty when it wants to be — as on the wistful, fairy-tale soundtrack of "Aaron" or on the video-game loveliness of "Vida" — which only further confirms that Venetian Snares' sound can really never be summarized. 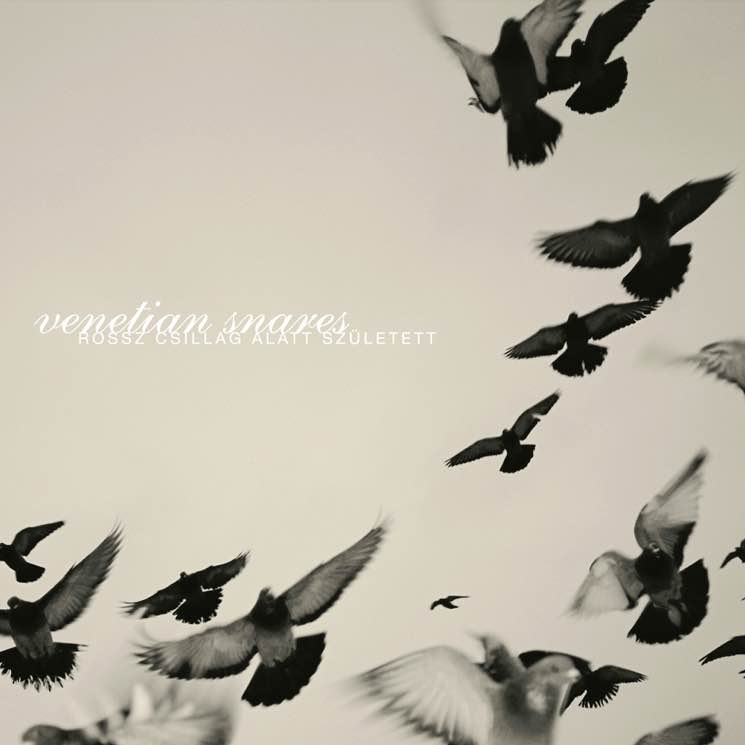 For many, this is Venetian Snares' most "respectable" work to date, possibly because it often tumbles under the umbrella of modern classical. Conceptualized while on a trip to Hungary, the record was inspired by a vision Funk had of himself as a pigeon on Budapest's Royal Palace, which explains the album cover, if nothing else.

"Öngyilkos Vasárnap" is a cover of Hungarian composer Rezső Seress's "Szomorú Vasárnap," a song that was reportedly banned in Hungary for inspiring multiple suicides, including that of Seress's fiancée, which will give you an idea of the album's harrowing nature; it also samples Billie Holiday's vocals, though, if that helps. Among the samples of this album are revered pieces like Igor Stravinsky's "3 Pieces for Clarinet" and Sergei Prokofiev's Quintet in G Minor, some of which are treated to Funk's trademark barrage of snares, while others are left to revel in their own beat-less glory.

One could be forgiven for thinking that this all sounds pretentious, but it couldn't be further from the truth. Venetian Snares' vicious drum work paints these classical pieces in a never-before-seen light, while they, in turn, add new levels of dread — or beauty, depending on the piece — to his production. Rossz Csillag Alatt Született isn't just a career highlight for Venetian Snares — it's earned its place as one of the most striking electronic albums of the last 20 years. 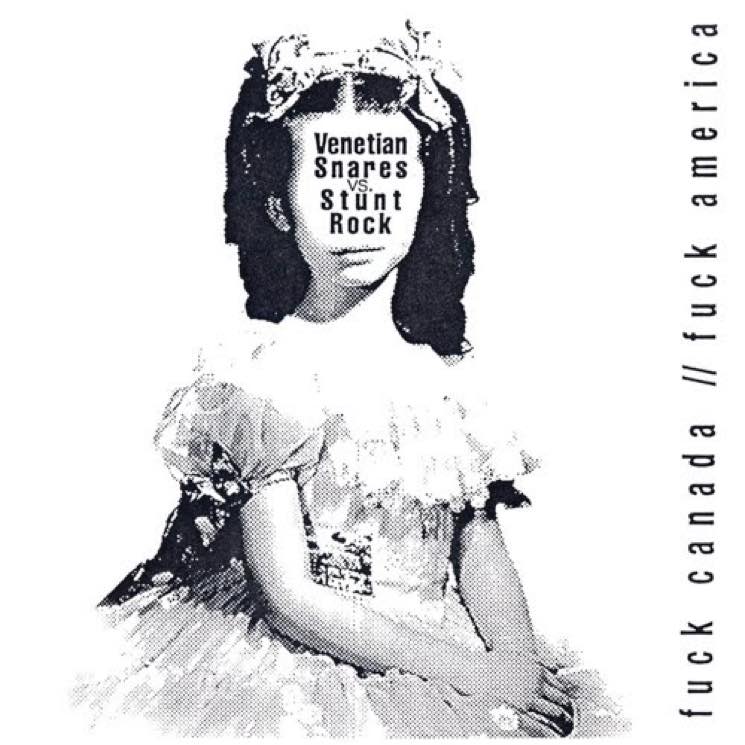 Fuck Canada // Fuck America (1999) starts with a recording of someone pissing backstage in a nightclub on "A Penis Is Just a Great Big Clitoris with a Piss Hole," and that's actually as pleasant as the album gets. From there on in, it's more about whether you can stand the aural punishment. By and large, Venetian Snares records are not meant for general consumption, but Fuck Canada // Fuck America is only palatable to a very small cross-section of society; one that we'd hope to never meet in a dark alley.

Earlier works like 1999's Greg Hates Car Culture, 2001's Making Orange Things and 2005's Winnipeg Is a Frozen Shithole follow the same suit. Part of their downfall lies in the fact that most of Venetian Snares' charm lies in the spaces between the punches to the face, so a Snares record that's all pummelling leaves out the best part. That said, if you're a fan of gabber, then have at 'em. 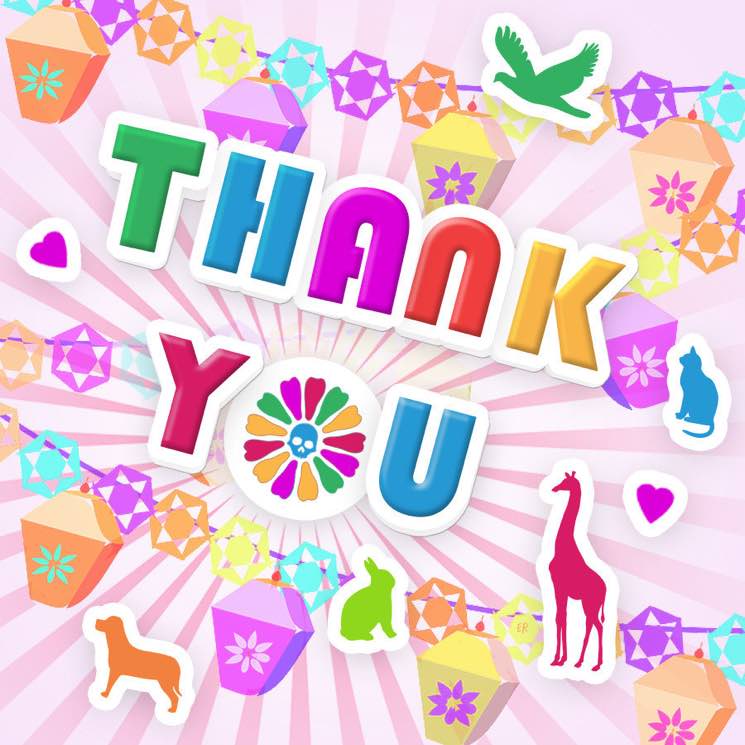 Often, after finishing a Venetian Snares album your brain is destroyed; you want a nice cup of tea and maybe to reach for that whale noises CD that your kooky aunt bought you. Luckily, there are plenty of EPs on hand for when you just want to dip a big toe into Funk's murkier waters. Hospitality (2006) leads the pack in this regard. It's a near-perfect burst of Venetian Snares that would have made the list proper if it had just a little more music.

Following close behind are the bite-sized Cubist Reggae (2011), Fool the Detector (2012) and the 15-minute, one-track glory of 2002's A Giant Alien Force More Violent & Sick Than Anything You Can Imagine. Funk's lesser-known collaborative EP from 2010, as Speed Dealer Moms — created alongside John Frusciante from the Red Hot Chili Peppers and the distortion wizard Chris McDonald, better known as SKM-ETR — definitely needs a mention, too. The self-titled EP offers just two tracks, but they're a delightful mess of weird time signatures and infectious blips.

Funk has a number of aliases too — BeeSnares, Hawerchuk, Puff, Ventriloquist Snakes — but by far the most prolific and fleshed out is his Last Step moniker. There are four albums to choose from here, but the self-titled debut from 2007 outshines its successors. If you've always wanted Venetian Snares to jettison the percussion and just give you some funky synth jams, then look no further: Last Step awaits.

Finally, after realizing he was in some financial trouble in 2015, Funk launched his own Bandcamp page, where a lot of out-of-print records were made available to hear, much to the delight of his fans. Within 24 hours, he had topped the Bandcamp best-seller list, and to show his appreciation, Funk released new album Thank You for Your Consideration free of charge. Find that record below.