"I worked as a graphic designer for over a decade before I became a tattooer, so my tattoo work has a bold, pop art-influenced style"

By Alex Hudson
Published Jul 19, 2021
​Shannon Hemmett just might be Vancouver's leading source for shadowy, '80s-inspired post-punk. Not only does she play synth in the band ACTORS — who have been releasing singles in anticipation of the upcoming album Acts of Worship, due out later this year — but she also recently launched a solo project called LEATHERS with an EP, Reckless. Blending dreamy string synths with minimal dance beats and mascara-streaked melodies, it's a stylish piece of goth pop that's both creepy and totally inviting.

In addition to churning out dark tunes, Hemmett is a busy visual artist and tattooer with a striking, classic-looking style. We caught up with the musician to ask her about her personal history with tattoos, her line of prints inspired by BOSS guitar pedals, and the best tats she's ever inked.

What first got you interested in tattoos and inspired you to get your own?

To my parents' dismay, I started getting tattooed as soon as I was legally old enough. I was completely fascinated by the process and the art form. I'm heavily tattooed now; pretty much covered from collar to knee, except for a few empty spaces on my arms. 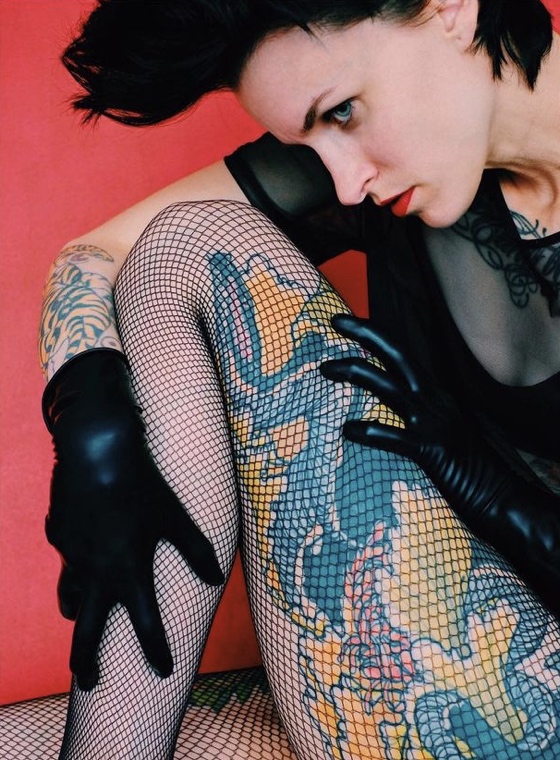 How did you start giving tattoos to others?

I apprenticed with my amazing mentor Chris Hold in Vancouver, who now co-owns Palace Tattoo. As part of my apprenticeship, I tattooed myself and my mentor first, then a few trusting friends, and it took off from there. 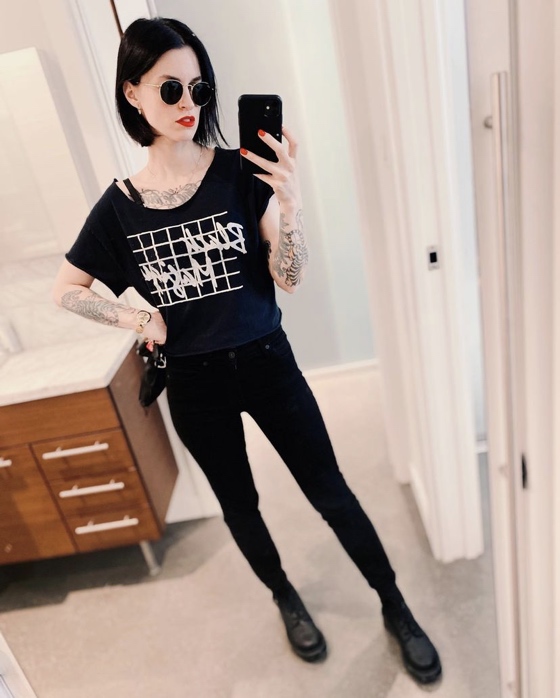 How would you describe your tattoo style?

I worked as a graphic designer for over a decade before I became a tattooer, so my tattoo work has a bold, pop art-influenced style. I like to use a lot of black and bright colours in my designs. 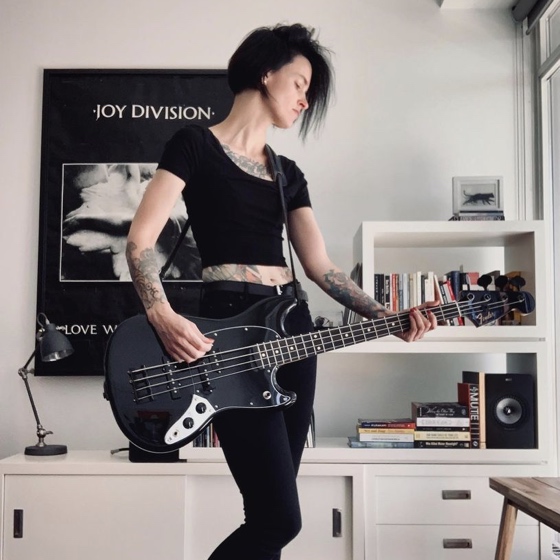 Have you ever had any tattoo mishaps, either getting your own or giving tattoos to others?

Thankfully not! My attention to detail has served me well in this department. Always quadruple-check any spelling before proceeding!

Could you share photos of a few of the favourite tattoos you have given?

I love tattooing classic tattoo symbols like skulls and roses. This rose is on my ACTORS bandmate Adam [Fink — who, full disclosure, is an Exclaim! contributor]. 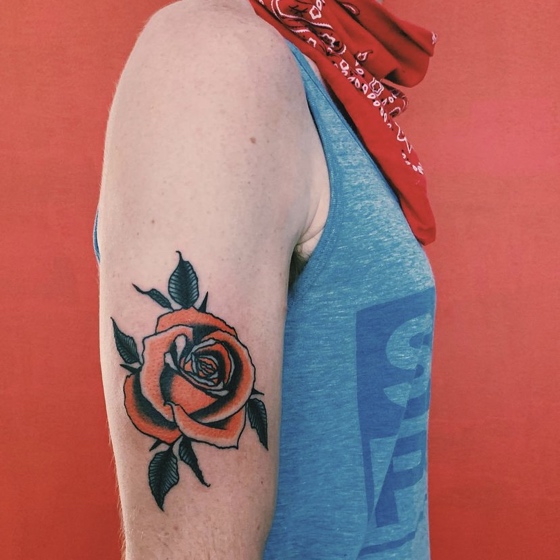 This spider tattoo worn by my friend Sharlena is a favourite too. 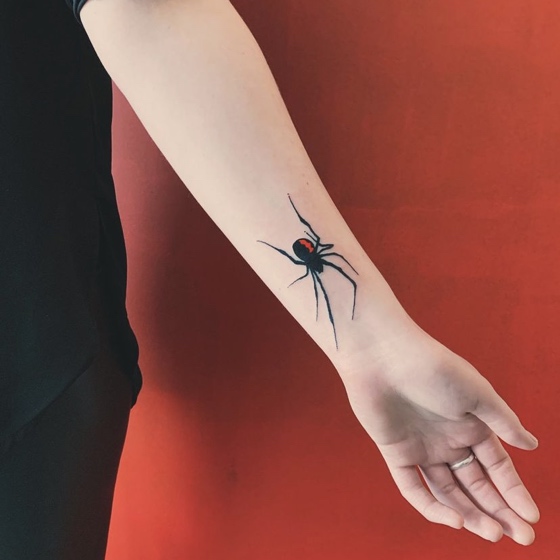 Hand tattoos are challenging because the skin surface is a bit different than the rest of the body. I love how this skull piece turned out on my ACTORS bandmate Jason [Corbett]. 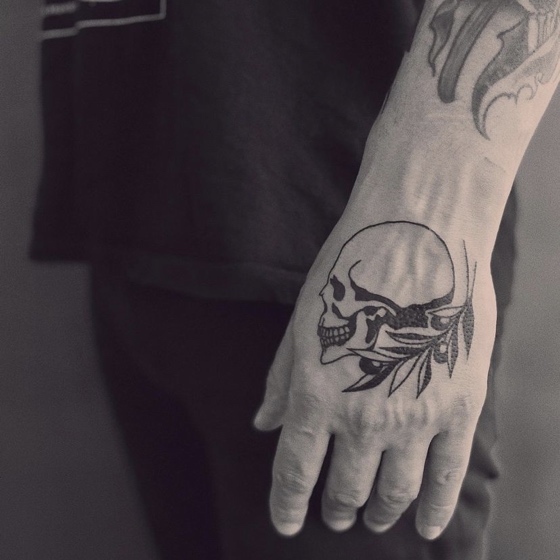 In addition to tattoos, what other visual work do you do?

During the first COVID lockdown in Vancouver, tattoo shops were closed, so I started doing custom guitar pedal artworks inspired by people's favourite bands. I've designed over 100 different ones now! I still offer art prints and t-shirts for those through my website. I also oversee all the album artwork, T-shirt design and photography for my bands LEATHERS and ACTORS. 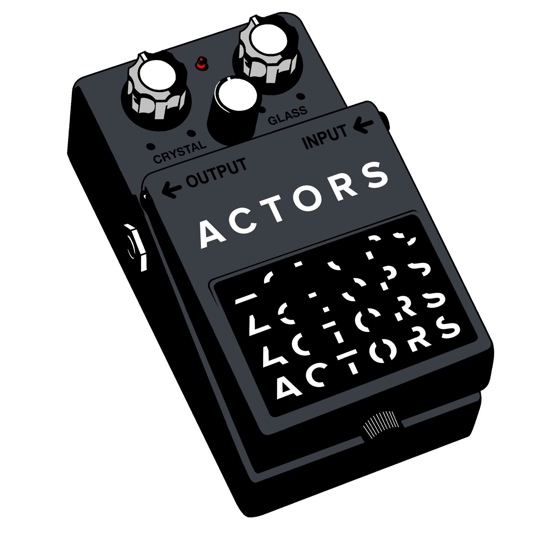 What music have you been working on lately?

LEATHERS just released the Reckless EP on Artoffact Records. We're also fast at work on our debut full-length LP, which is due out in Spring 2022.

ACTORS is preparing the release of our second album, Acts of Worship, this fall. Once travel restrictions lift, we'll be touring in support of that. We're so excited to start playing shows again. The tour starts in early September and will take us all over the world: across the U.S., Canada, the UK and Europe.