The Perfect Day at River & Sky, the Hidden Gem of Ontario Music Festivals

By Matt Bobkin
Published Jul 29, 2022
"Somebody told me when I arrived that it's magical in the night," said Dilly Dally vocalist-guitarist Enda Monks during their headlining set at River & Sky. Their informant is totally right, but they missed some crucial information: it's just as magical during the day.

Held over four days every July on the banks of the Sturgeon River in Field, ON, smack dab between Sudbury and North Bay in the middle of Northern Ontario, River & Sky Music/Camping Festival is just as much about enjoying the atmosphere as it is about the music. Where most festivals corral campers into a few common areas, tents are welcome basically anywhere on the Fishers' Paradise grounds (except for the beach) the fest has called home since 2012, so you can get intimate with any part of the terrain, including right by the main stage, which I'm told is very quiet at night. The lineup is small but impeccably curated — every artist is a must-see, and you actually can see them all because only one stage runs at a time, so there are no conflicts. The environment itself provides enough choice, with lots of different ways to enjoy the fun.

This was my third time attending River & Sky and my third time writing about it for Exclaim!, after 2017 and 2019. Those years, my coverage focused entirely on the music, and there was no shortage of memorable moments to share, like Mdou Moctar's legendary beach party, Hollerado's miracle set that began while their guitarist was stuck in a plane, and PUP corrupting the typically docile crowd with the power of punk rock. But so much of the festival's magic happens between sets or with the performers in the background, magic that no amount of capsule reviews could possibly capture. To celebrate the singular nature of River & Sky, I've charted out the perfect day based on my experiences from the 2022 edition, which ran from July 21 to 24, so set up your tent and put on your bug spray because things are going to get wild.

Once you've taken out your earplugs to drown out the late-night fireside chats in your campground, stumble your carcass over to the Main Stage area. Though the stage remains dormant until the evening (except for the early afternoon soundchecks), the sizable area is active all day between the bustling merch shack, all the local food vendors and the snug Coffeehouse Stage. While you pound back some Birch Bark Coffee, take in the sounds of local folk musicians, and feel a tear come to your eye when Sudbury's own Julie Katrinette (of the Ape-ettes), Eric Clancy and Brooke Bruce team up for a cover of "Only Love Can Break Your Heart." If, somehow, you still have all your faculties, you can enjoy some morning yoga, hooping, or a presentation on the solar system hosted by the North Bay Astronomy Club. It might come in handy later. 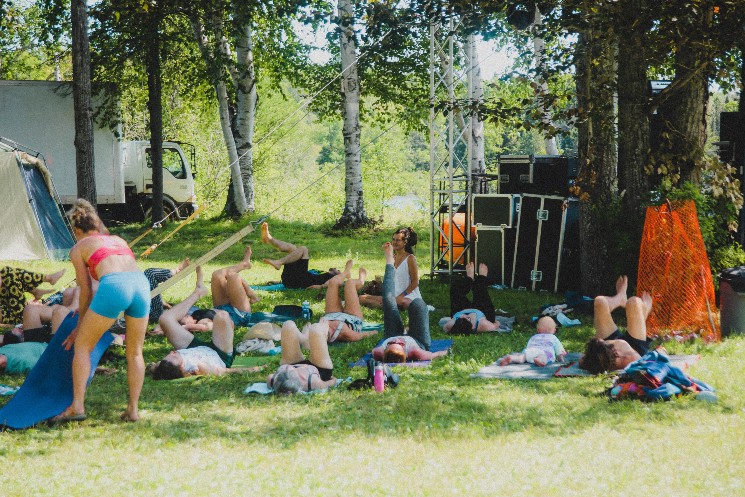 Morning yoga by the Main Stage

Head on down to snag some prime real estate at the Beach Stage, located on the banks of the Sturgeon River, because you'll be there a while. The stage is actually a gazebo, so you can stand eye level with the performers while they soundtrack the beach party, and freely check out views from the side and back if you really want to see the rhythm section. Dance along to folk rockers Beams' cover of "Running Up That Hill" (which, for the record, they released as a single back in 2015, long before it was an antidote to Vecna's curse), laugh when PACKS' Madeline Link jokes about scrapping her usual set of heartfelt rock tunes in favour of a drone set, rock out when Montreal dream pop unit Bodywash drop a shoegazing new track with shades of Sonic Youth and Slowdive, or relax when Ouri conjures the low tide with her ambient cello tunes. If you're wearing band merch, you're bound to make some new friends to chat up amid the sand and the sounds. 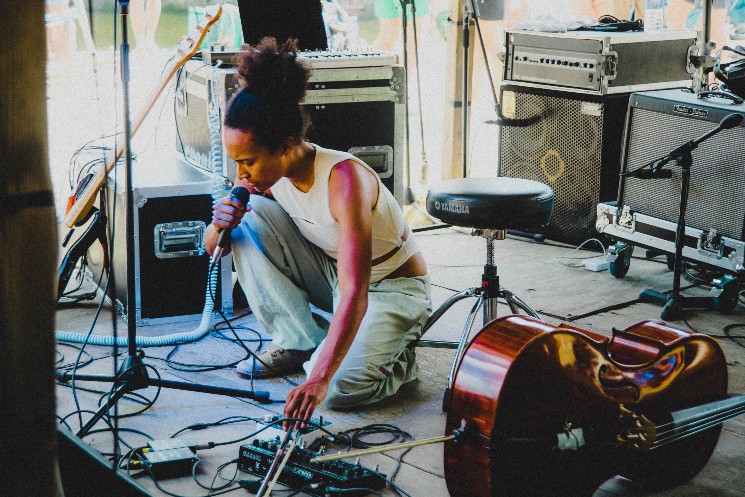 Once the music on the beach peters out in the mid-afternoon, time to get off your towel and head into the gentle waters of the Sturgeon River. You'll see tots in water wings staring curiously at the adults and their mysterious aluminum cans, kids running around splashing everything in sight, and the über-prepared surveying the crowd from atop their inflatables. The water's cold at first, but you'll get used to it after a dunk, and the current isn't too strong so you can swim to the other end of the river and climb atop the rocks. Then, pack into the festival's own, custom-built sauna and slowly shuffle your way toward the rocks and the heat while people filter out, feeling your pores opening up until you're soaked in your own sweat. Accept a gift of Epsom salts from the person with intense eyes and a long beard, and listen to their philosophies on love and the universe until you realize that all your friends have left. Politely excuse yourself to run into the water and cool down before heading back to your tent to get ready for the evening. 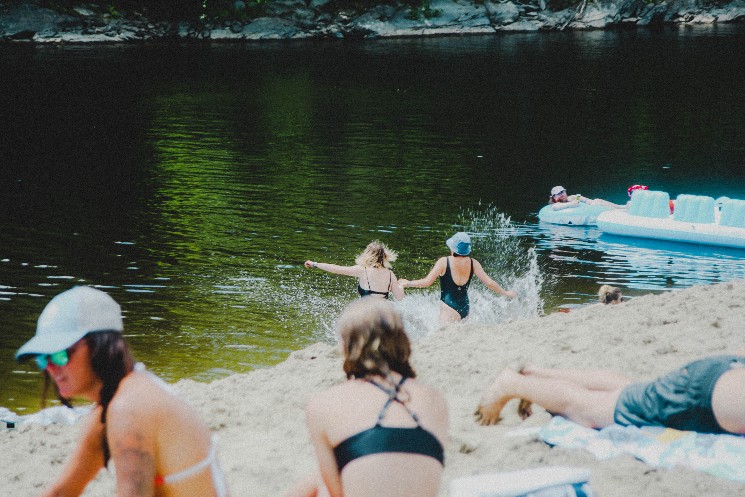 Swimming in the Sturgeon River

While you make your way through the Fishers' Paradise grounds, take a moment to greet the many dogs that are patiently and politely attending the festival. Ask their human guardians if they're alright to pet, and feign surprise and excitement when they almost inevitably say yes. When a big dog excitedly drops a stick at your feet, hurl the shit out of that stick into a nearby clearing, cheer when they bolt away to fetch it, and don't be too upset when they drop the stick at another playmate's feet instead of your own. With the sun still in the sky and your towel and bathing suit drying on your tent, head back to the Main Stage area to grab some dinner from the local vendors as the music begins. The early bands have their work cut out for them as they have to compete with the late-day nappers and the talkative dinner crowd, but it just makes those standout moments hit all that much harder, like when Casper Skulls — whose founding members Melanie St-Pierre and Neil Bednis, Sudbury locals who recently returned after several years in Toronto, began dating at River & Sky 11 years ago and are now weeks away from their wedding — gallop into the cowpunk finale of "Ouija," or when the Effens pile a half-dozen audience members on stage to dance to their Strokes-y rock, or when Yoo Doo Right deliver earsplitting post-punk and krautrock histrionics to a devoted crowd of front-rowers. 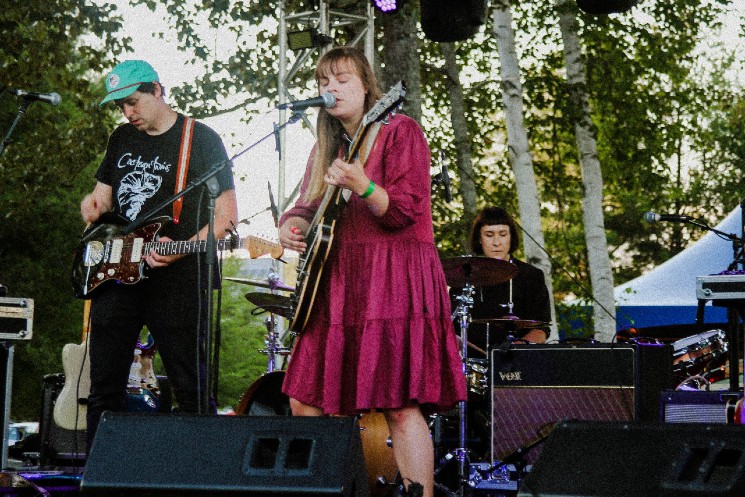 As the sun fully sets and the mosquitoes descend to feast upon unsuspecting attendees, dash back to your tent one last time to put on your light-coloured pants and douse yourself in bug spray before joining the dedicated crowd at the front of the Main Stage. Unlike most festivals, where the crowds are so big that they couldn't all possibly fit into one space, it always feels like the large open area is just big enough for everyone to pile into, to share in the catharsis of the headliners. Join Choses Sauvages' disco dance party and crouch down and leap up in unison like a bursting geyser on Félix Bélisle's instruction, marvel at Austra's synthpop while Katie Stelmanis's soprano soars sky-high to mingle with the many visible stars, and feel Dilly Dally's grungy rock tracks in your bones as the grounds shake between Enda Monks's gritty delivery and Liz Ball's searing guitar solos. River & Sky is way more than the music, where a thin crowd doesn't necessarily mean that people aren't into it, but these headliners deliver in bringing the crowd together for some shared sonic appreciation. 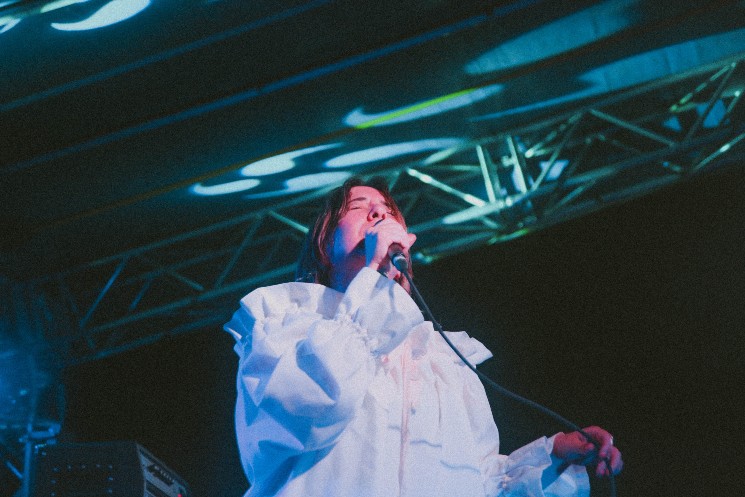 Sure, you've already been to the Beach Stage today, but coming back under cover of night is like entering a different dimension. Giant glowing flowers protrude from the sand and red stars adorn the gazebo, courtesy of Studio Nude Beach. The programming matches the location's unsettling psychedelia, be it Teleporters' wordy and eccentric surf rock, Frankie and the Witch Fingers' face-melting garage riffs, LAL offshoot ROSINA's techno affirmations, Tush's endless funky grooves (which really merit a run around the gazebo so you can focus on each member's stellar playing), or Rare-Earth Magnet's dreamy prog, and you can warm up by the fire or take a midnight dip to bring you back to Earth. By the time Sudbury bluegrass virtuosos Murder Murder finish their much-hyped reunion set by baptizing one of their own in the river, you've long-since suspended your disbelief — anything can happen. 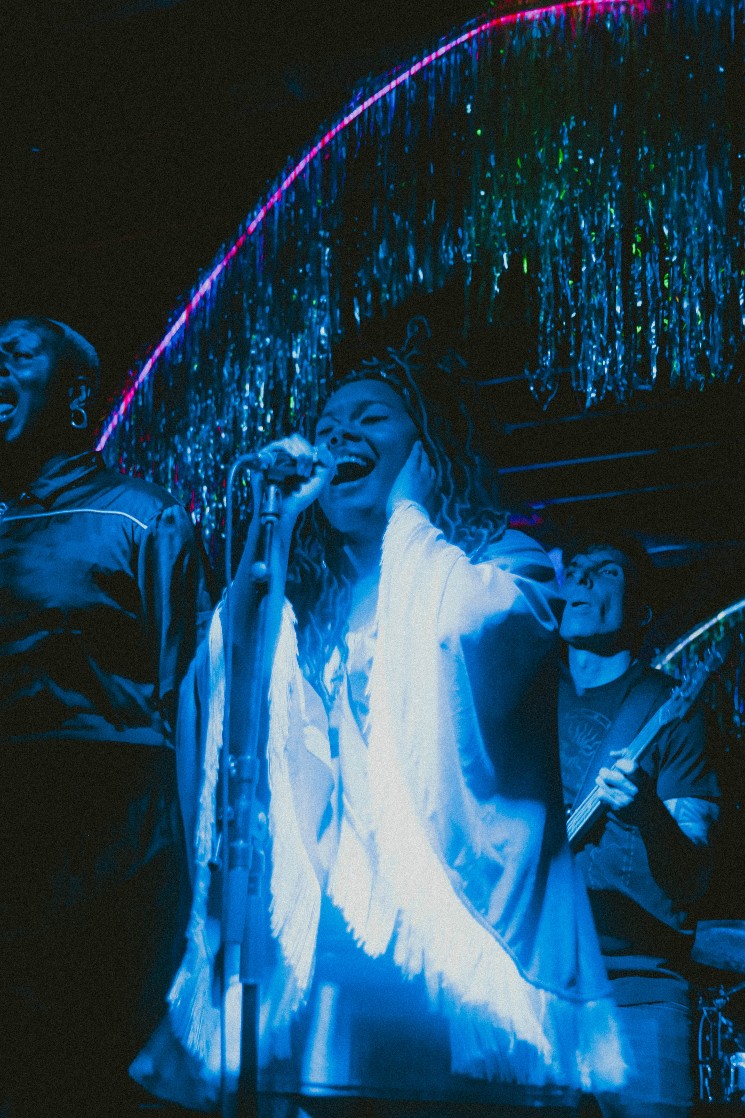 Don't lose yourself to the Beach Stage mayhem — you'll need at least some of your faculties to navigate the long, dark trek down the Chaganooga Choo Choo trail to the late-night Dance Party Stage. The sheer excitement of hearing the thumping bass getting closer as you realize, after several wrong turns, that you've finally arrived in the right place is only eclipsed by the beauty of the sloping tree canopies and glowing green mushrooms, inviting you in for hours of dancing your heart out. Whether you pack it in at 3 a.m. to make sure you have a clear head for the next morning or choose to groove out until the sun comes up, you can rest easy knowing that you've done it all. At least, until tomorrow. 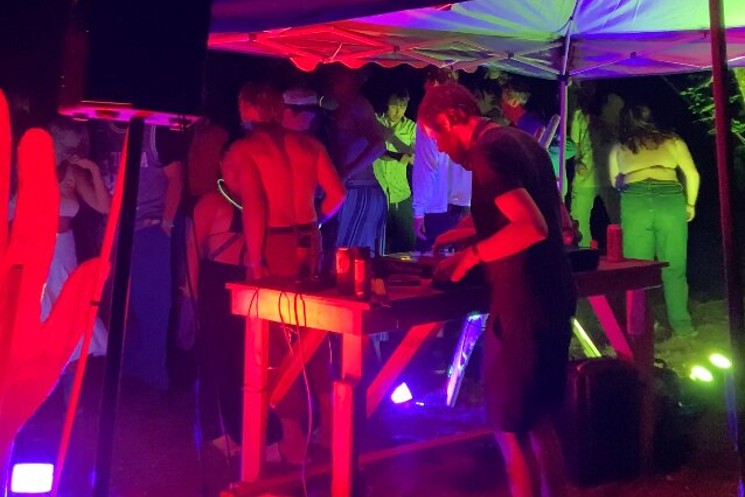