By Matt Bobkin
Published Sep 02, 2021
The small crowd of Toronto music fans who were hoping to end their pandemic-induced concert hiatus last Saturday, August 28, were forced to wait just a little longer. After a day filled with clear skies and plenty of humidity, the rain started promptly at 7 p.m., the exact time that local psych band Hot Garbage were set to announce their debut album with a guerilla-style, free, open-air live set.

It had been a year and a half since the band's last show, when they had to abandon their March 2020 tour due to the COVID-19 pandemic. And after making a plan and renting equipment and telling all their friends about their return, the band picked the one hour that day when the rain came down, joined by plenty of thunder and lightning. During a conversation with Exclaim! a few days before the show, I asked Hot Garbage bassist Juliana Carlevaris what her dream result for the show would be, and the first thing she mentioned was "good weather." Somewhere out there, a future storm cloud chuckled.

But she also mentioned "everybody taking care of each other," and that part undeniably came true. As the rained-out crowd huddled under the shadow of the decommissioned Bloor Collegiate Institute building — right next to the abandoned lot that has become unsanctioned public space Bloordale Beach, the show's intended venue — donating shelter and beers to the wet and thirsty, there was a sense of togetherness, one of the first times that the Toronto DIY music scene had felt like a community in a long time. It was nice to swap pandemic stories with friends old and new, even in a thunderstorm when it was unclear if the show would actually go on. 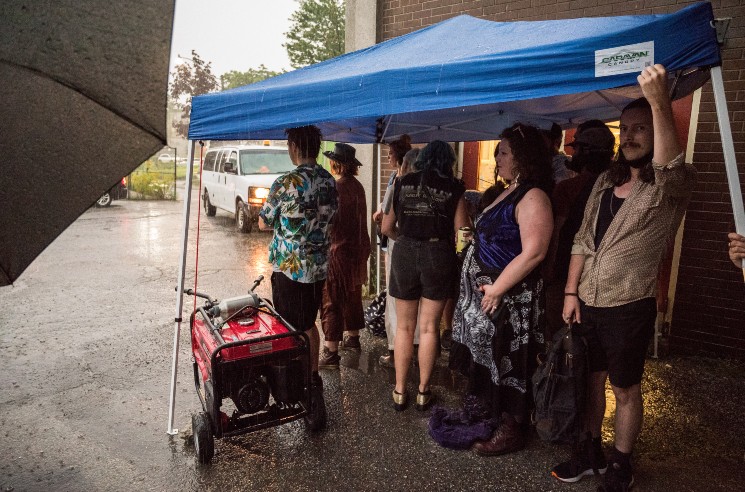 Three hours and one impromptu trip to get some lights later (the natural light that the band had been banking on having long-since dissipated), the music began as a crowd of approximately 50 people danced, hung out and listened to the band's groovy jams. Guitar solos, reverbed vocals and plenty of percussion welcomed the horde back to something that sort of resembled reality pre-pandemic. The show was the latest victory under the belt of Carlevaris, a fixture of live music in Toronto in recent years as one of the city's stalwart local music promoters.

Carlevaris has been putting on shows since 2014, when she began booking bands at venues such as now-shuttered Mirvish Village staple the Central; she now runs promotion agency DIG and books for local spots the Garrison and Baby G, and co-founded psych festival Night Owl. But even though she largely books traditional venues, she's always been aware of the necessity of DIY spaces. Her ethos makes her decision to play in unconventional locations such as an abandoned 118,400-square-foot lot wholly unsurprising.

"The Baby G [having a capacity of] 140 is sometimes too large to do someone's first show ever. It's a big enough room that you need about 70 people to make it feel good. There's a few other spaces that are smaller that are available but at a price point that's not necessarily accessible to a touring artist's very first show here, where you're not looking to put up those rental costs."

Says Carlevaris, "I was always interested in exploring more untraditional spaces. I used to live above the Smiling Buddha and we did [house] shows there from time to time. When I was living there, we would definitely host friends that were coming through and charge something small at the door and maybe sell beer. And, obviously, that was a pretty fortunate situation, because we were above a venue so the noise wasn't as much of an issue." But with small venues such as FAITH/VOID, Double Double Land and Soybomb all gone, the need for DIY spaces as an incubator for the music community has never been more vital. 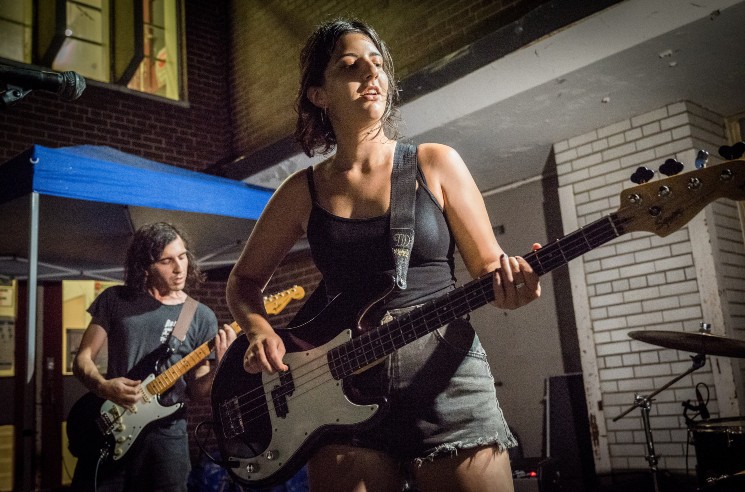 This is what led Carlevaris and the rest of her Hot Garbage bandmates to string together the Bloordale Beach show. "We have a record coming out and we have a record release show booked at a venue. We're excited for that," she says, referring to the band's show as part of the Garrison's ALIVE concert series, currently scheduled for November 6. "Fall seemed like a pretty safe bet, but as of late, it's starting to seem like that's not the case. And we definitely want to do something to celebrate this release. We want to have a show where our friends can come see it and not be at a super-reduced capacity where we have to be very careful about how many tickets we sell. Just to have a release show or play something around this record coming out."

She adds, "There's always talk in the scene about how much folks miss the DIY show scene since most of the DIY venues and art spaces aren't around anymore and new ones haven't really popped up as the city's become seemingly even more stringent about these things in past years. Though, in the pandemic, people started gathering in all these outdoor spaces out of necessity and it brought a cool energy back to Toronto, and we wanted to channel that into a fun end-of-summer show." 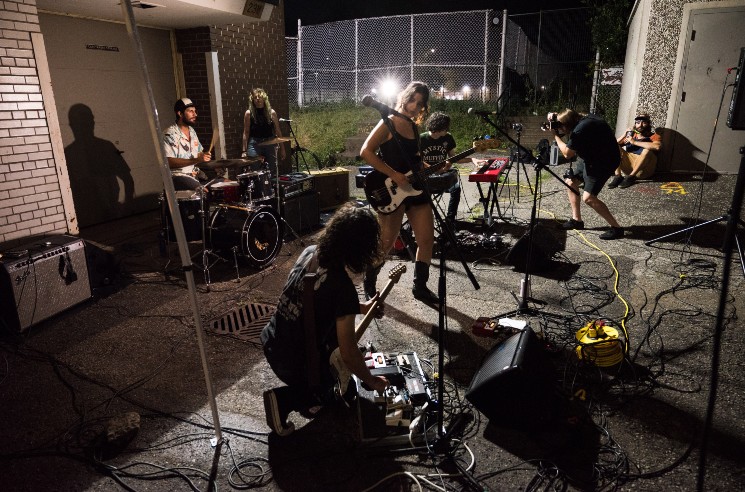 Hot Garbage's debut album, RIDE, is due for release on October 29 via Montreal psych label Mothland. It was officially announced two days ago, on August 31, alongside the release of lead single "Sometimes I Go Down." And though the album's squall of fuzzed-out guitars and drawling, Sonic Youth-style vocals (recorded live off the floor) deftly conjure a thick haze of smoke and sweat, the band's live renditions prove that there's nothing quite like hearing the songs being forged from the ether right in front you. As the band ran through most of the tracks from the album, seeing the dozens of attendees chatting among themselves or dancing hypnotically with the music was a potent reminder of the power of live music and the necessity of public, live music-ready spaces like Bloordale Beach.

Hot Garbage, a rising band with their first album on the way, don't have the same pull as other artists who have put on shows during the pandemic — like, say, Arkells, who put on a trio of shows at Toronto's Budweiser Stage a few weeks earlier, each capped at 11,000 attendees. Meanwhile, Hot Garbage played a show at an outdoor space driven by an almost subconscious need to prove that they could. But while the Arkells shows were criticized for inadequately enforcing rules on masks and distancing, there were no such issues at Bloordale Beach — people had plenty of space to breathe freely without fear of endangering those around them.

To hear Carlevaris talk about the plan for the show ahead of time made it sound so simple: "Show up with a PA and lay down some rugs and a generator. It's very DIY. That's gonna be how it goes down." And even though that wasn't exactly how it went down, the end result proved that even a minor hiccup isn't enough to dampen the spirits of live music lovers. If you build it, they will come.

Speaking after the show, Carlevaris agrees. "I think that was the most special part of the experience for us — that people stuck around in those conditions. It spoke to how much everyone's been through in the last while and how much we all just want shows and a sense of normalcy back. I came away from it feeling a lot less isolated and a lot more excited for the future."

Watch Hot Garbage's new video for "Sometimes I Go Down" and check out more of Chris Gee's photos from the event by browsing through our Instagram gallery.