By Josiah Hughes
Published May 23, 2018
As previously reported, Matt Groening is working on 20 episodes of a new show called Disenchantment for Netflix. Today, we get our first official look at the series.

The series is billed as a medieval fantasy comedy, starring the hard-drinking young princess Bean, her feisty elf companion Elfo and her personal demon Luci. According to Netflix, the trio will encounter ogres, sprites, harpies, imps, trolls, walruses and other "human fools."

"Ultimately, Disenchantment will be about life and death, love and sex, and how to keep laughing in a world full of suffering and idiots, despite what the elders and wizards and other jerks tell you," Groening previously said of the show.

You'll find official stills from the show above and below. Disenchantment will arrive on August 17. 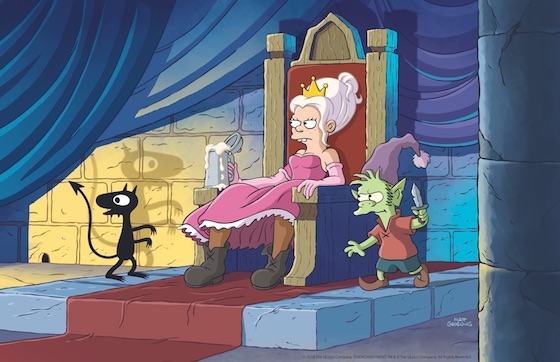