By Levi Manchak
Published Jan 27, 2020
Winter doesn't typically erupt on the prairies. It's more like a slow rolling, collective coma that takes hold just after the holidays and doesn't let up until late April. The downtime this year was Winterrupted by sharing acts and importing the established Winterruption Regina, Saskatoon and Big Winter Classic Calgary festivals to Edmonton. We ventured out from a January hibernation to break up the long northern winter nights and take in five of Winterruption's acts.

Jennifer Castle
Freemasons Hall, January 24
There was a spectacular interruption early in Jennifer Castle's gentle set of Joni Mitchell-esque folk songs. A man who had been sitting at a table collapsed, falling out of his chair to land face down on the hardwood floor. He didn't move as members of the crowd rushed over to assist. All Castle could do is kneel down and hope the man would quickly recover. A few seconds later the man opened his eyes, a little dazed and embarrassed. It wasn't revealed if he'd taken too much of something, not enough of something else or simply dozed off in the early Friday evening, but he seemed to be alright. He was escorted into the lobby as Castle wished him well and mentioned that someone else had collapsed at one of her Toronto shows and that it may be "starting to emerge as a pattern."

It unfortunately derailed the rest of her set. It would have been nice to pay greater attention to her poetically infused folk, but even as she switched from softly strummed guitar to more elegantly played piano, wondering about the fate of the man cast a somnambulant fog across Castle's performance. 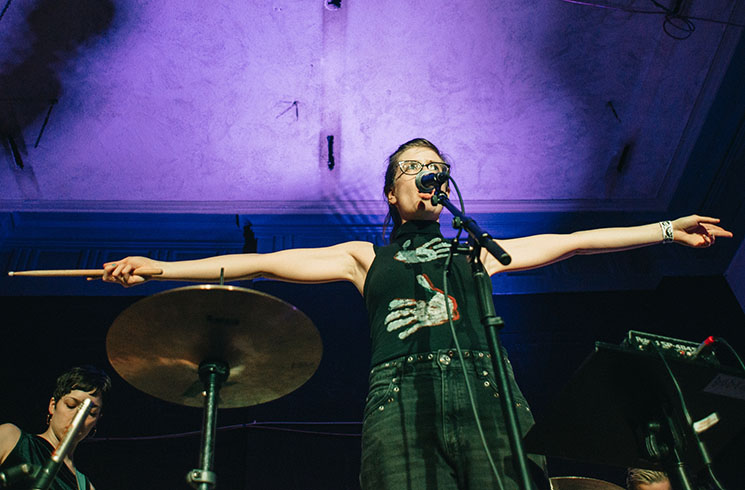 Bodega
Freemasons Hall, January 24
Nostalgia for the present shouldn't be a thing, yet somehow, Brooklyn's Bodega manage to wrap it into a post-punk package that is equal parts provocative and pleasing. The band grabbed the crowd by their ears and eyeballs immediately and refused to let go through the entire set. Percussionist and vocalist Nikki Belfiglio acted as the lithe hype person, visually anchoring the band by hitting a hi-hat while posing and dancing center stage. She also shouted out chorus lines that punctuated singer Ben Hozie's not-quite-sung, not-quite-spoken vocal delivery.

For all their sardonic pretence and wry cleverness, the band were more sincere than expected, expressing genuinely that they were happy to be playing their first show in Edmonton. Hozie said that he was unsure how many people would opt to watch them rather than queue for the oversold GZA show happening parallel to their appearance. The crowd may have been modest in size, if not enthusiasm; Edmonton crowds have a particular penchant for self-awareness and they matched the band's fervent energy, feeding it back in an appreciative infinity loop. 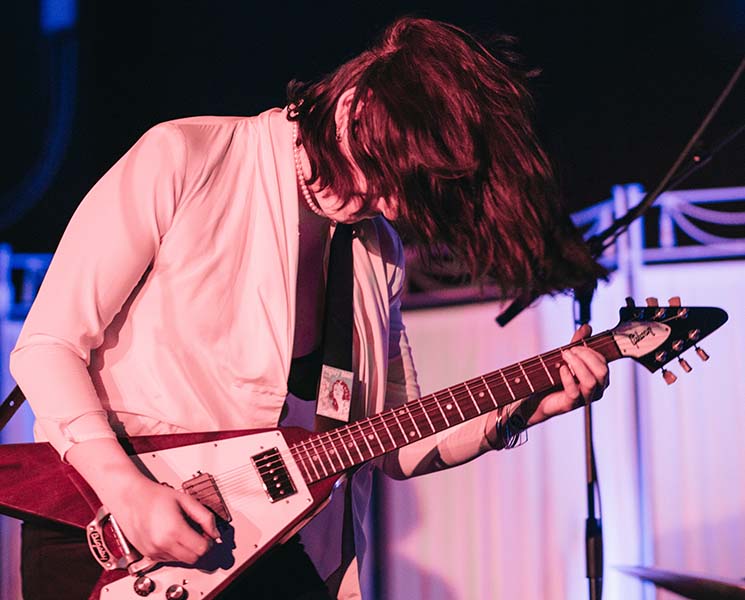 Wares
Freemasons Hall, January 25
Wares' set began with a specific confrontation — front-person Cassia Hardy's nerve ends v. the universe. Nervy ardour was part of the Edmonton group's live charm. After the first few notes, Hardy took control of her adrenaline and channelled her jagged energy and prodigious guitar playing into a wildly impressive performance. She shredded and transcended, somehow merging punk, noise and warbly indie rock into anthemic new territory. The local Edmonton scene isn't the only one who've taken notice of Wares' talent either. Partway through the set, Hardy introduced a new song, revealing that it would be out in February via a signing to stalwart indie label Mint Records.

At another point in Wares' set, Hardy climbed a speaker stack determined to literally elevate her performance. Through it all, it was beautiful to watch a performance that seemed as though it could unravel at any second. Drums fell over and a grating hiss of an ungrounded DI line threatened the set, but as Hardy threw herself across the stage with an unbridled personal chaos it was clear that it would take far more than a few minor stage issues to make the band flinch. 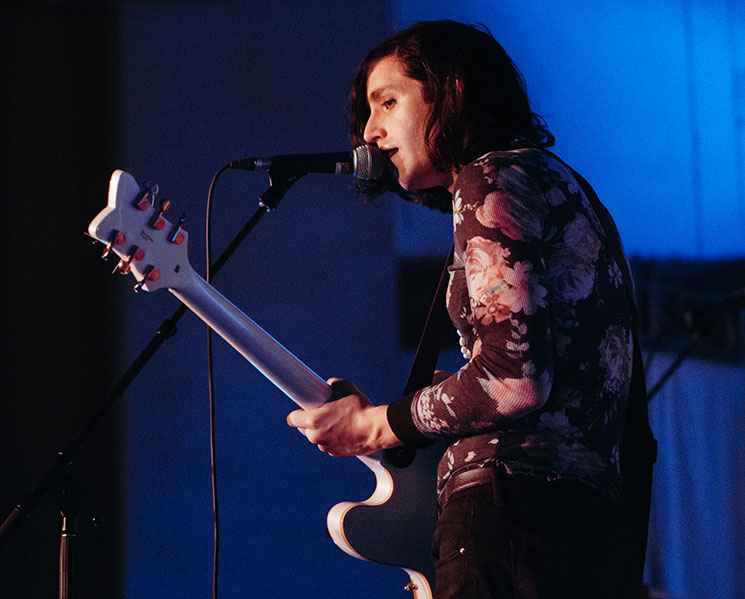 Ezra Furman
Freemasons Hall, January 25
The lighting in the Freemasons Hall was as bright as the dull glow of a dying campfire, but Ezra Furman is no stranger to fighting everyday darkness. From punk protest anthems through to snarling personal elegies, Furman shone like an incandescent bulb about to explode for her first appearance in Edmonton. The lighting, the red Dickies jumpsuits adorning her band, and Furman donning a classy pearl necklace over her floral print shirt, all combined to create a subtly audacious visual tableau. Through her first few songs, Furman may have just been getting started, but she's long since learned to howl.

Furman stopped to address the crowd part way into the blistering set saying, "Despite whatever emotions I'm about to express, I'm very happy to be here." Then she tore through "Trauma" with an utterly fearless growl. Ezra Furman's entire set was intensely earnest and formidable. Her appearance drew a large assembly of the activist set to the show and everyone in attendance's resolve was strengthened by the unbridled belief in the possibility for the evolved culture that Furman and her music represents. 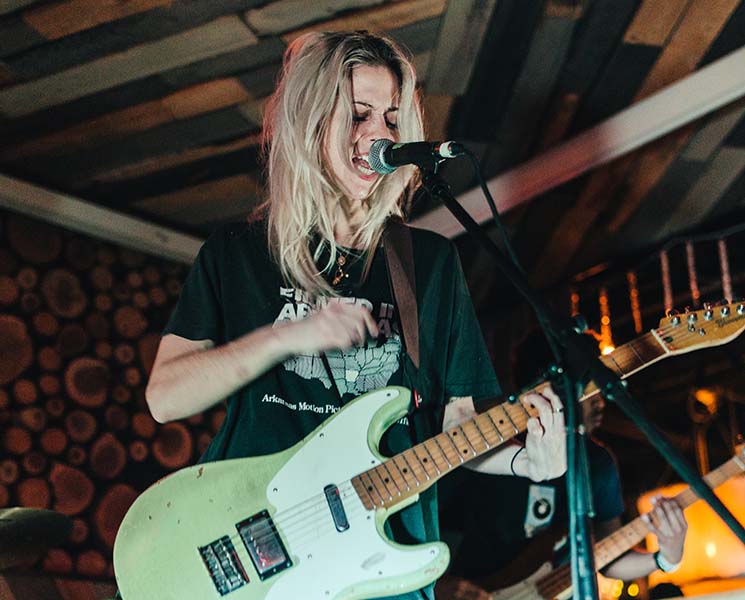 Bully
Rocky Mountain Ice House, January 26
There was no buildup, banter, bright lights or punch lines for Bully's appearance as the final act of Winterruption Edmonton. Bully have a simple but effective formula: deliver a devastating set of grunge-tinted punk without any extra accessories. Alicia Bognanno's visceral lyrics, whipping platinum blonde mop and raw one-two-fuck-you attitude was enough to charge the crowd into a subtle, Sunday night frenzy. The rest of the band followed Bognanno's lead, energized but stoic, trying to find room to move on the small stage and letting the feedback from Bognanno's sea-foam green guitar provide the interstitial soundtrack for the preordained tuning breaks that were marked out on the set list.

The cozy stage and faux wood panelled backdrop cast a strange smokehouse vibe that contrasted with Bully's saccharine grunge-punk. It may have been a better venue for an Americana act, but being from Nashville, it can't have been the first time Bully were booked into a venue that didn't entirely fit them. Even without enough room to truly flaunt their sharper edges, the band cut through any Sunday night lethargy with their calculated chaos. After they thrashed through their set to end of the festival, they stepped down, walked through the elated crowd, leaving only a pile of broken glass behind them.