In a statement shared Sunday at 9:30 p.m. PT, Breakout Festival organizers announced that Lil Baby was "too sick" to perform, adding, "We know you were looking forward to seeing him but these circumstances are beyond our control."

In a subsequent apology published today, organizers called the actions of festival attendees "the worst case scenario of disappointment," writing, "we want to apologize to everyone who peacefully left the venue, as well as, the venue staff and the Hastings-Sunrise neighbourhood for the way Breakout 2022 ended. We do not condone violence or destruction of property and are utterly disappointed with the way some of our patrons acted at this year's event."

Organizers added that there would be forthcoming "information and details regarding partial refunds for 2-Day and Sunday Breakout 2022 ticket holders."

Lil Baby, who wrapped a summer tour alongside Chris Brown in late August, confirmed his illness in a respective statement shared via his Instagram story (archived below). "I have been going so hard these past few months without any breaks that it finally caught up with me. And my body completely shut down," he wrote. "I owe you guys big time and will for sure make up for it soon."

Lil Baby's cancellation followed a Saturday lineup change that saw Trippie Redd take the headlining slot in place of Lil Uzi Vert, who organizers shared was "no longer ... performing due to unforeseen circumstances." On September 16, organizers announced that Polo G and SoFaygo would not be making the trip, with Pressa and Boslen added in their place.

A statement from the PNE published today reads, "Our first priority is for the safety and wellbeing of our staff as many were deeply affected by the reaction of guests and behaviour that ensued. We thank the Vancouver Police Department for their quick and professional response which prevented the situation from becoming much worse. To our neighbours - the PNE is incredibly sorry for the actions of those guests and impact this behaviour may have had on our community. We will be undertaking a full investigation and will be making further statements shortly."

Here are your set times for this weekend 🎈☀️

Unfortunately Polo G + Sofaygo will not be performing. Welcome @pressapressa + @Boslenofficial to the lineup.

See you this weekend. pic.twitter.com/5rjP3DbBlG 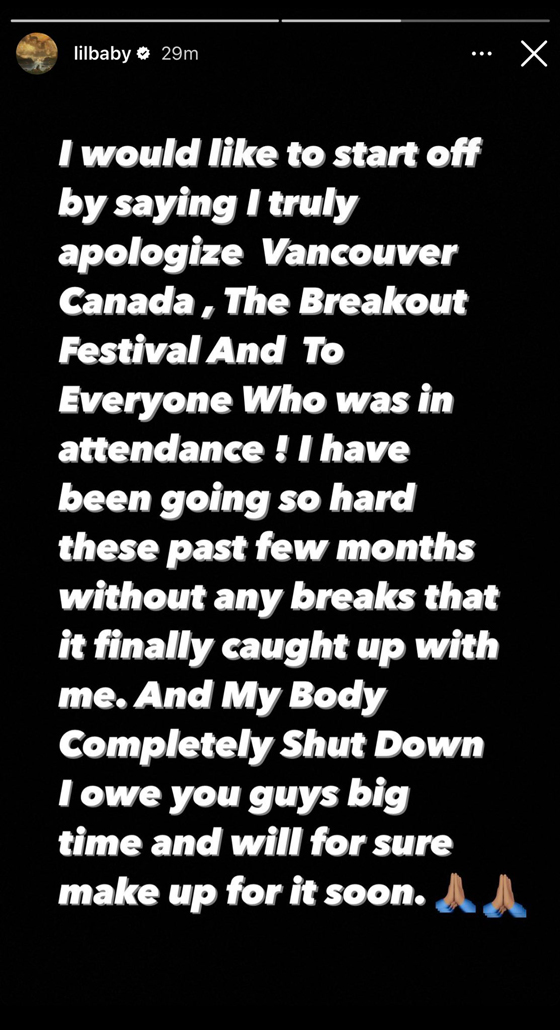