Osheaga 2022 Brought the Best in the World to Montreal

By Yara El-Soueidi
Published Aug 02, 2022
After last year's scaled-down, all-Canadian Get Together, Osheaga was back in full force for the first time since 2019. At the Montreal festival's 15th edition, which took place this past weekend (July 29 to 31), 120,000 fans returned to Parc Jean-Drapeau to party in the sun and heat to the sounds of massive artists from all over the globe.

The five stages were back at their usual spots (as were the damn stairs that bring you from one end of the site to the other), along with the social activations and food trucks. The 2022 lineup was packed with newer artists (most of whom weren't close to Osheaga-level when they last held the full festival), making it perhaps the first lineup to lean towards the Gen Z crowd, though with lots of love for millennials too. Between emerging artists (including several local standouts) and world-renowned established acts, Osheaga 2022 was filled with memorable moments — most of them good, some of them Machine Gun Kelly. Here's what stood out: 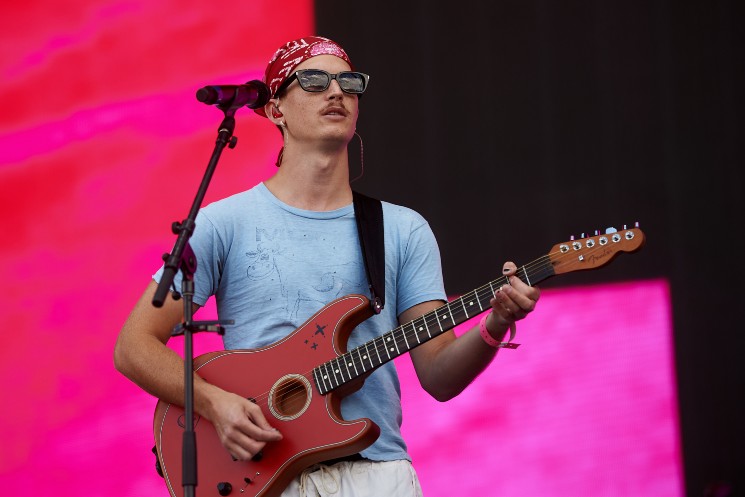 The American singer opened the festival on the Mountain Stage on Friday with a conventional performance. With a half-empty crowd in front of him, he sprinted back and forth on the stage, trying to elevate the spirits as best as he could with songs from across his discography. The Friday afternoon slot is a tough one, but Dapperton did the best he could to get festivalgoers pumped and ready for the days ahead. 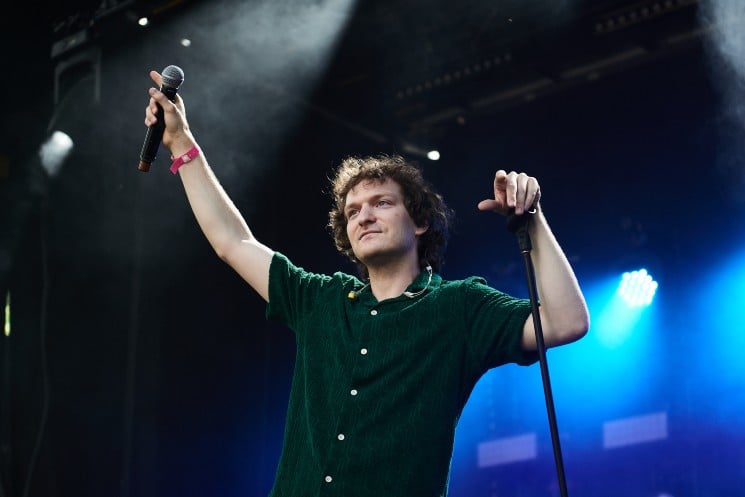 The Montréal singer gave an excellent performance on the Tree Stage surrounded by his musicians, pacing through the stage while delivering synthpop hits from 2021 album Silicone Villeray like "L'été je m'ennuie." His set was attended by locals in the know and curious passersby who eventually joined in on the dance party. The shaded stage gave a break from the heat but also played in favour of Robert Robert, who surely gained quite a few new fans with his performance. 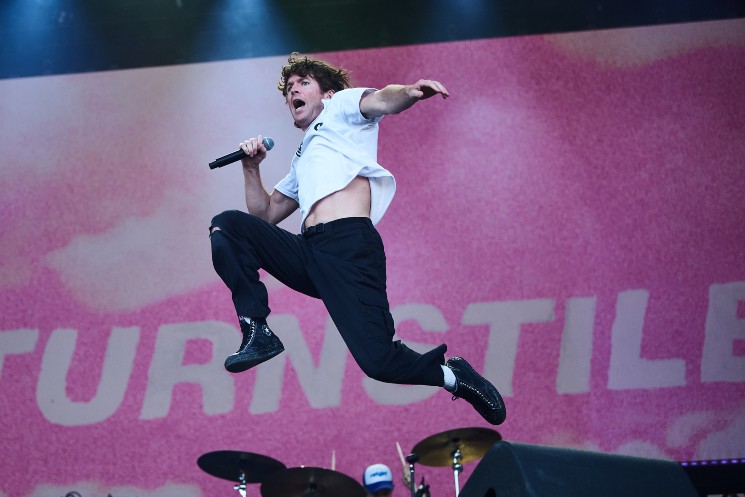 One of the most outstanding performances of the day, Turnstile were at Osheaga to rock. Their show was a reminder of the golden age of Warped Tour, the crowd filled with older punks, hardcore fans and ex-emos, and a massive mosh pit formed less than 30 seconds into opener "MYSTERY," from latest album GLOW ON. The band were visibly thrilled to be there; bassist Franz Lyons was smiling throughout the whole set, having the time of his life. With songs like "BLACKOUT," "Drop" and "UNDERWATER BOI," it was difficult not to jump around like vocalist Brendan Yates did (as seen above), and the band kept the energy high all the way to the final moments of "T.L.C. (TURNSTILE LOVE CONNECTION)." 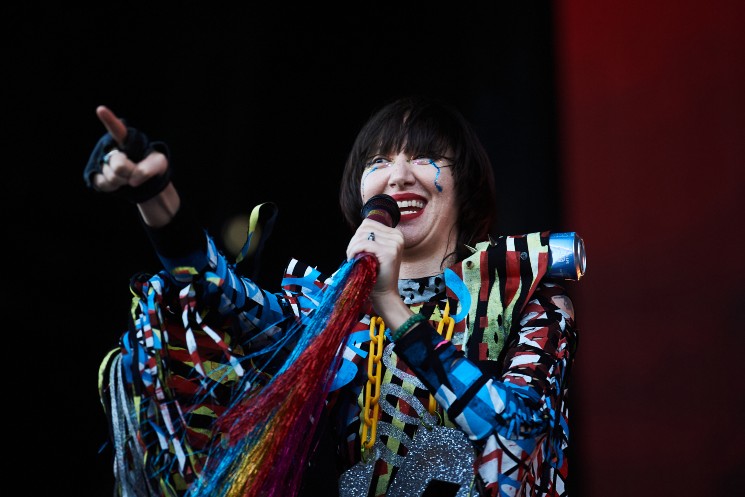 It wasn't Yeah Yeah Yeahs' first Osheaga (the festival favourites previously played in 2009 and 2018), and the crowd definitely enjoyed this blast from lineups past. Karen O was magnetic to watch as she donned her typically flamboyant attire, dancing on stage and engaging happily with her bandmates. A staple of the millennial coming-of-age experience (giving Gen Z the chance to watch the previous generation in their natural habitat), the band played classics like "Maps," "Soft Shock" and set-ender "Heads Will Roll," the perfect way to prime the crowd for that night's headliner… 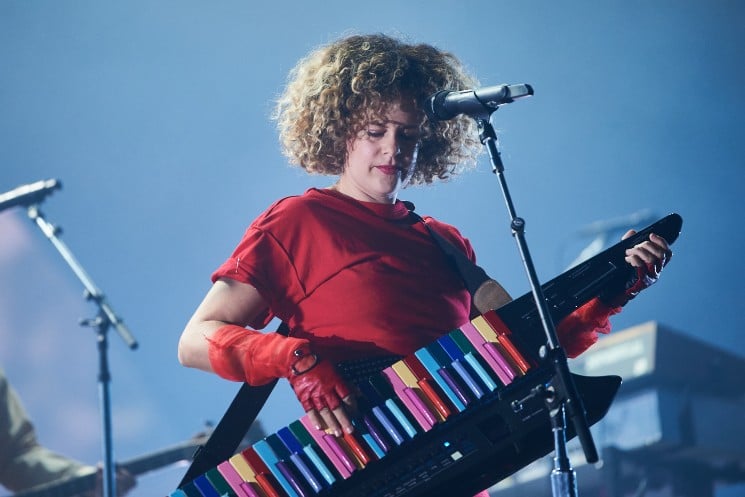 The long-awaited return of Montreal's prodigal sons and daughter didn't disappoint. With a disco ball over the stage, Arcade Fire opened with "Age of Anxiety I" from new album WE before moving onto hits from earlier albums. The whole set was punctuated by a laser show that even reflekted off Regine Chassagne's belt during "Age of Anxiety II (Rabbit Hole)," making the crowd go crazy, and they even covered Wolf Parade's "This Heart's on Fire" with that band's Dan Boeckner (currently a touring member of Arcade Fire) on lead vocals. The band ended on a high note with "Wake Up," confetti and rain falling on everyone. Win Butler instructed the fans to continue to sing even after the band left the stage. The singing continued for five long minutes, where fans were drenched by rain but hearts warmed by the performance. 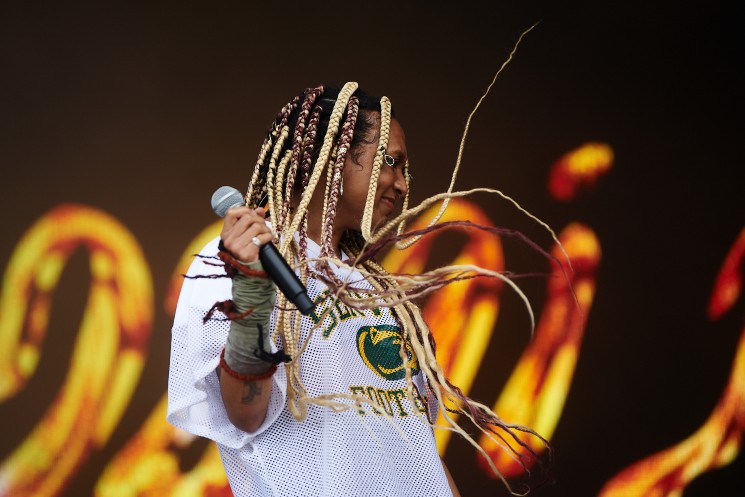 A last-minute addition to Osheaga, Montreal's Magi Merlin came in to cover for BIA, who could not perform. And what a great choice! The R&B is an electric, ecstatic performer — even in front of a tiny crowd, she had great interaction that made people laugh. Playful and endearing, Merlin delivered great renditions of songs from recent EPs Drug Music and Gone Girl. Next year, she deserves a bigger stage and a better slot!

People may have wandered to the Tree Stage early in the afternoon hypnotized by the power of Pierre Kwenders's perpetually swaying hips, but they stayed for the Afropop grooves of his latest album, José Louis and the Paradox of Love. The Montreal dance music party-starter didn't miss a beat as he sang while dancing around on stage. 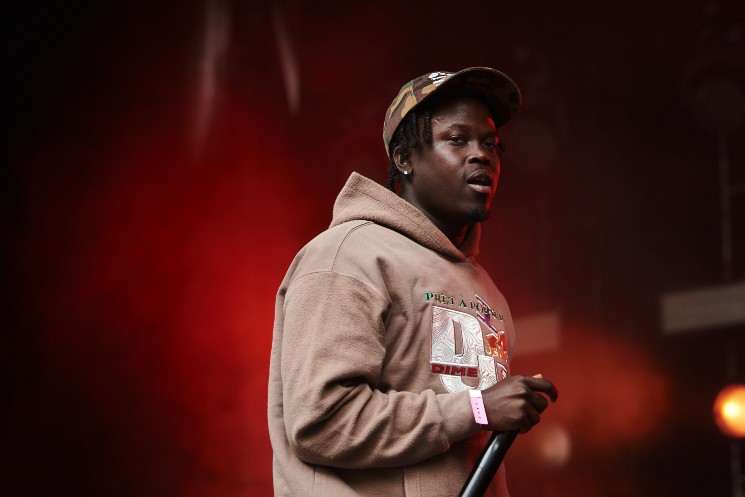 If there's one artist that no one should have missed on Saturday, it was Skiifall. The young rap genius delivered nearly perfect bars while teasing the crowd. Skiifall loudly and proudly represented his Montreal hometown during this special show by premiering a new song, playing his well-known "Ting Tun Up" and even bringing a fan on stage for "Lost Angeles."

Though technical difficulties gave Sophia Bel's set a shaky start, the Montrealer quickly regained confidence. All dressed in pink and with a red tutu, she embodied her recently released debut album Anxious Avoidant as a Y2K fairy coming to Osheaga to spread her pop-punk hymns. And she clearly managed to do so, even with the problems she encountered initially. 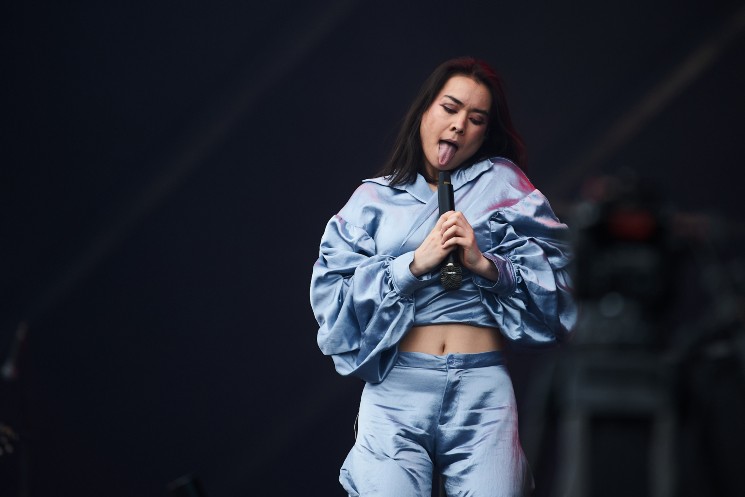 As usual, Mitski appeared on stage, ready to be as theatrical as she could be. The singer is well-known for not speaking to the public during her sets and being detached from the crowd. She hasn't changed, only addressing the crowd once to say hello, but even if her coldness may have been off-putting for first-time viewers, she still delivered a perfect set. Mitski may be better suited for concerts than festivals, but at Osheaga, she went all in, jumping around the stage like never before. 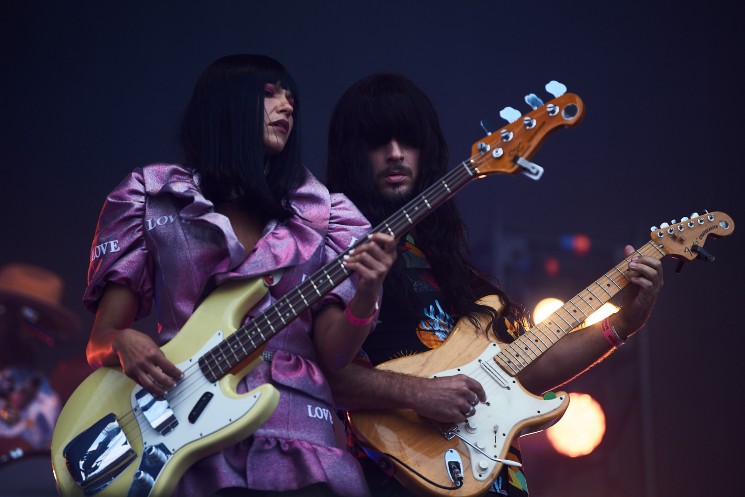 Dressed in their usual black wigs, Khruangbin arrived to an excited audience ready for their classic mellow soul tracks. However, as the crowd danced away in the sun, the band moved into playing covers of well-known classics like "Bennie and the Jets," "Let's Dance" and "Wicked Game." Unfortunately, there were too many covers and very few originals — a disappointing move from such great composers. 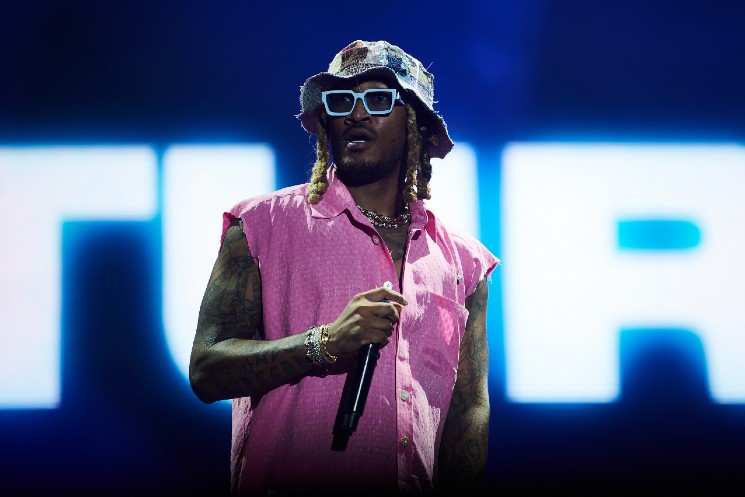 Saturday's headliner Future came to Montreal fully loaded. The crowd was already pumped by his hypeman and ready to receive him. He didn't disappoint, delivering a classic rap show that appeared to please everyone from mainstream listeners to the hip-hop heads in the crowd. Explosions, pyrotechnics — he spared no expense in delivering the best possible live experience. Performing hits like "Pushin P," "Mask Off" and "Jumpman," Future used the crowd's energy to his advantage to wrap up Day 2 with a bang. 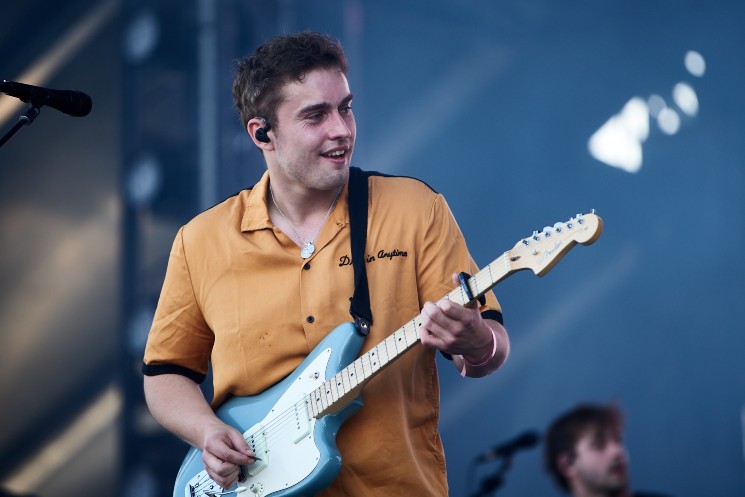 The UK singer, often compared to Bruce Springsteen, took the stage at 2:40 p.m., a strange slot for someone who often plays in front of 45,000 people. But that didn't dissuade fans from filling the space before his stage. Fender delivered a strong rock performance and even got fans to mosh to his heavier songs, but it was during mellower cuts like "Spit of You" and "Seventeen Going Under" that he shined the most. Fendermania is now a thing in Canada. 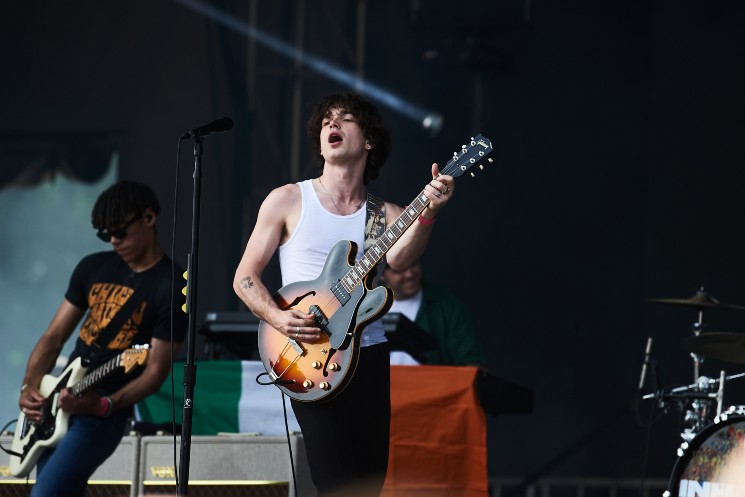 Primarily known as Bono's son's band, Inhaler made the Green Stage rock on Sunday afternoon. Their energy, charisma and Irish accents made it difficult not to dance or swoon to their indie rock songs. Elijah Hewson in particular was great with the crowd — which made sense, since it's in his blood — but the entire band displayed talent deserving of recognition. 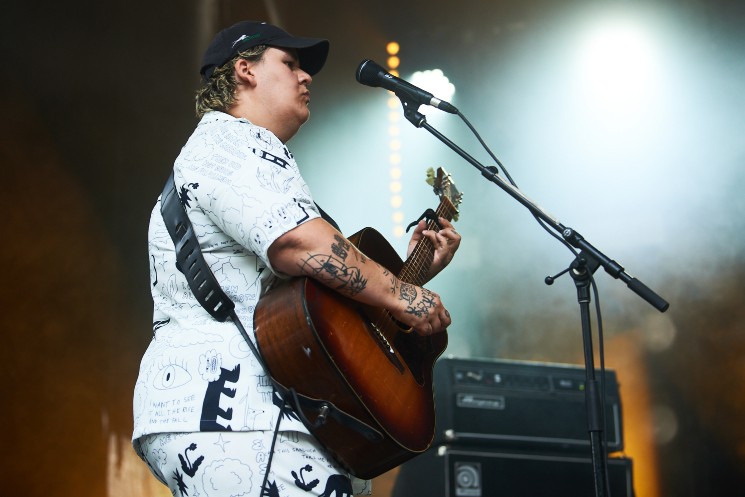 With a bit of delay because of technical difficulties, Safia Nolin came to the stage decisive, ready to give her fans an excellent performance. Her voice was peaceful, and her guitar playing was impeccable. Through her presence, Nolin reminded everyone why she is one of the most talented singers from Quebec and even Canada. 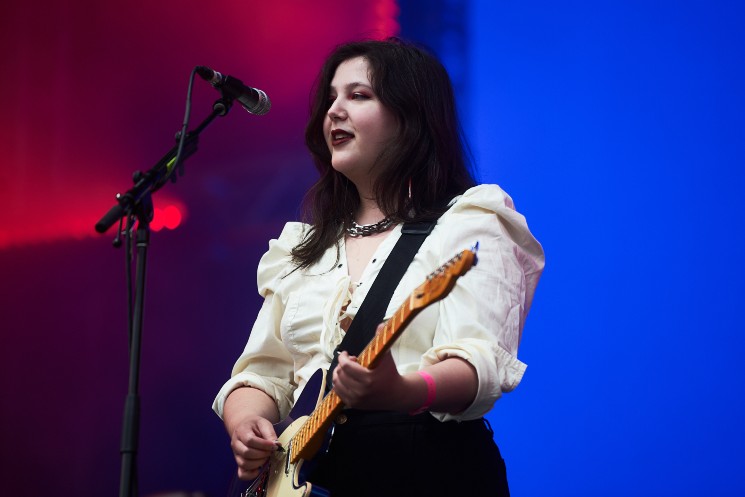 Indie favourite Lucy Dacus made a point to only speak French during her performance, wanting to practice her skills. This made her win the favour of her fans and made the set much more personal and tailored to the city. Dacus's introverted personality may pervade her stage presence, but her candid self shone through with her lyrics. 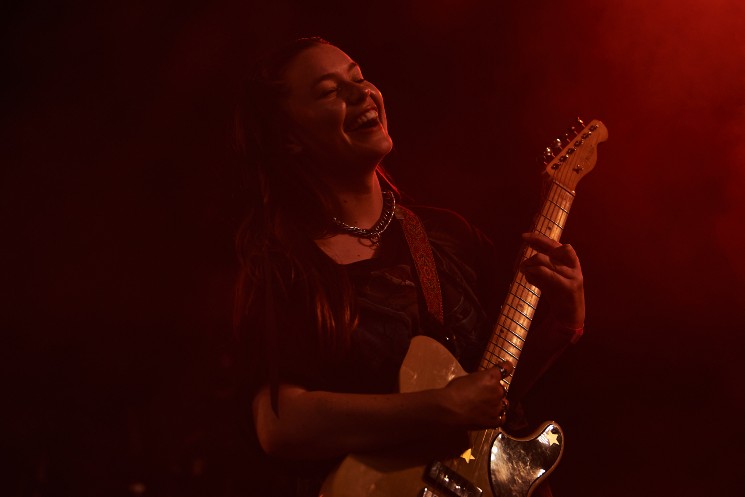 For their first-ever Canadian performance, the UK duo came onto the tiny Tree Stage visibly intimidated. It may have taken them some time to warm up to the crowd, but the crowd warmly received them from the first moments of their opening track, smash single "Chaise Longue," happily headbanging to their cheeky rock tunes. 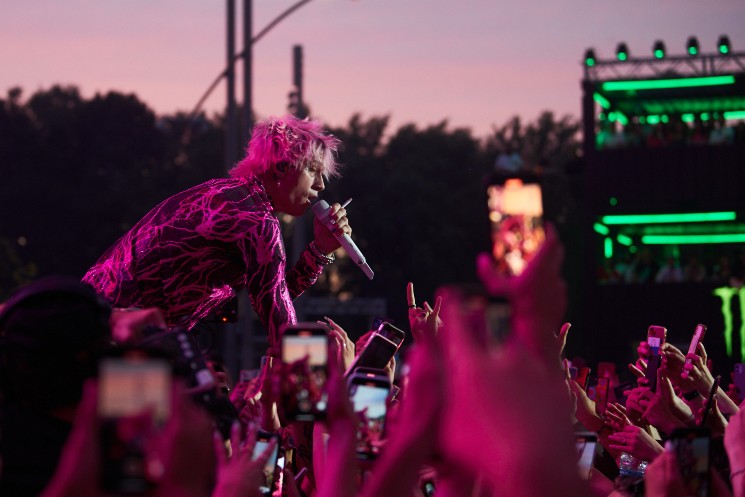 Machine Gun Kelly positions himself as an emo and pop-punk legend by using the genres' great names to his benefit, and it stinks — his usage of "The Black Parade" to hype up the crowd should be a felony. Best moment of his performance? He got cut off during his last song because he had gone over by 10 minutes. 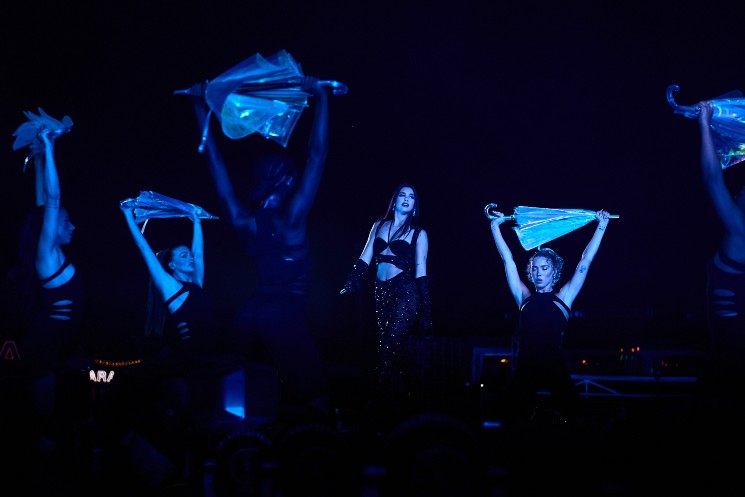 Less than a week after playing Montreal on her Future Nostalgia tour, Dua Lipa was back at it again to another adoring crowd. She is a born performer, singing, dancing, encouraging the crowd, and strutting on the catwalk with ease. Kicking off with "Physical," she fittingly moved around the stage quickly, joined by her equally skilled dancers. Such a flawless performer was the perfect person to close out Osheaga 2022 and begin the hype for next year.