"The Machine has been switched on"

By Calum Slingerland
Published Jan 28, 2020
After treating fans to a documentary late last year, Gorillaz have returned with new music while teasing the arrival of something dubbed Song Machine.

Today, the group shared their "Song Machine Theme Tune," which runs 22 seconds in length. The music arrives alongside accompanying Song Machine social media teasers, telling listeners that "the machine has been switched on."

Song Machine is not explicitly billed as a new full-length album, though the Spotify page for the "Song Machine Theme Tune" (seen below) points to the existence of seasons and episodes. 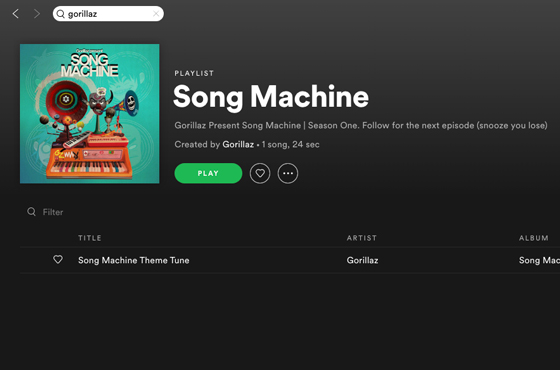 In any case, a new single from Gorillaz isn't far off. According to U.K.'s The Version, the group are set to premiere a new track featuring Slaves and Slowthai on BBC Radio 1 on Thursday (January 30).

Advance notice! @gorillaz team up with @slowthai and @Slaves for their brand new track - and it'll be @AnnieMac's Hottest Record on Thursday!

Listen to @bbcr1 from 7pm. pic.twitter.com/HT5bi4KXw0

You can hear "Song Machine Theme Tune" in the player below.

Gorillaz released their Humanz album in 2017, and followed it up with The Now Now in 2018.