They've been rehearsing the album, which turns 25 next year

By Josiah Hughes
Published Jul 27, 2018
Punk veterans Green Day are always busy with something. While they continue to push new material and projects, however, they're also willing to look back on their legacy. That's why fans think they're plotting a tour for the 25th anniversary of their seminal album Dookie.

Tre Cool recently posted the above image on his Instagram, writing, "Fun band practice — swipe to see the set list we played today."

The set list in question should look familiar to those of us who feel utter joy in the opening bars of "Burnout," as they practised Dookie in its entirety. 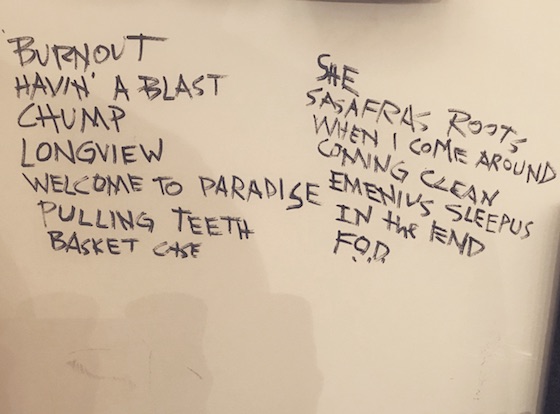 Though it's not much to go on, many are speculating that this means the band will celebrate a quarter century of Dookie with a 25th anniversary tour.

It wouldn't be the first time, either. After all, they played the album in its entirety at Reading & Leeds in 2013.