Anyway Gang Gave Ottawa Shelter from the Storm The Rainbow Bistro, May 24

By Daniel Sylvester
Published May 25, 2022
8
Still staggering from a weekend storm that left roughly 200,000 homes and businesses without electricity, a select few Ottawans made their way to the Byward Market for some much-needed reprieve.

Beset by a last-minute venue change from the 285-capacity Club SAW to the 150-person confines of the Rainbow Bistro, fans nonetheless packed the long-standing building, eager to be a part of the supergroup's first-ever tour.

While patrons jostled to snatch a booth or balcony spot, or squeeze onto the petite dance floor, Plains Cree singer-songwriter Wyatt C. Louis provided the positive vibes needed to get the evening underway. Adding elements of jam band musings to his repertoire — with help from his rubbery two-person backing band — Louis won the crowd over with a folksy set that was soothing and pensive. Firing into the first four songs from their 2019 self-titled debut, Murphy set the tone by jovially asking the crowd, "How many are here just to see me?" before recounting jokes that he previously delivered during stops in Edmonton and Montreal. Moving onto a trio of numbers from their just-released sophomore LP, Still Anyways, the seven musicians fashioned an instant bond with the well-lit crowd, as tracks like "Real Thing" and "Don't Give Up on Your Dreams" found Monks leading the building in a feisty clap-along, while Murphy and Roberts leaned back-to-back to strum away and ham it up. Hometown boy Versteeg was met with a warm reception as he recounted stories of starting his musical career in the very same room and even dedicated "Reckless Reckless" to his parents (who were in attendance) and their recently deceased pet dog. 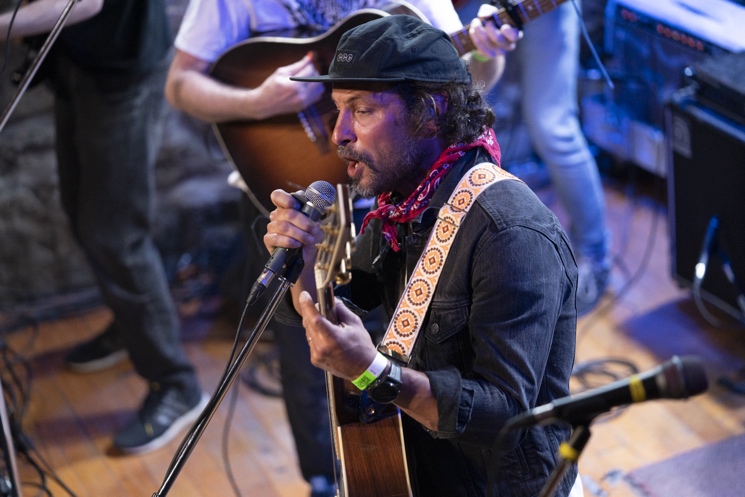 Following a break, Murphy and Versteeg returned to the stage, and the duo continued to trade barbs and entertain the masses, an ongoing routine that Roberts would refer to as "The Chris and Menno Show." Joining them for a spirited three-song encore, the band swayed to a repeat performance of "Big Night" before Versteeg urged Monks to abandon his instrument and meet him at the lip of the stage for a wildly out-of-tune crowd singalong of closer "Call on Me."

Dealing with a nearly overpacked venue, myriad sound issues and loads of false starts and spontaneous stage banter, Anyway Gang managed to charm their way through a ramshackle performance that left the crowd giddy with the intimacy and unpredictability of it all.