By Cam Lindsay
Published Mar 31, 2017
For the last six years, the Canadian film collective known as Astron-6 has been regularly blowing minds, Scanners-style, with their incredibly inventive brand of comedic horror films. From the ridiculous Manborg and the banned-in-Australia revenge flick Father's Day to the convincingly real giallo spoof The Editor and their contribution to ABCs of Death 2, Astron-6 has become one of horror's greatest filmmakers.

The latest project from the collective's members is The Void. Directed by Jeremy Gillespie and Steven Kostanski, who co-directed Father's Day, the film is set in a rural hospital, where a police officer (Aaron Poole) faces off against a mysterious death cult that, in a nutshell, tries to bring on the apocalypse. Although it could have easily followed the same comedy-horror shtick of their previous work, The Void will surprise fans with its deadly serious tone — which is one of the reasons why it is not being released under the Astron-6 moniker.

"It's not an Astron-6 movie, even though everybody seems to assume that it is, and I think that comes with a lot of connotations," says Gillespie. "If you go into it expecting that you might be surprised. You might be surprised regardless. There is humour in it, but it certainly isn't a comedy."

Despite the fact that it offers only a few laughs, The Void has a lot to offer fans of Astron-6 — most notably some remarkable practical FX and a mythology that will burn itself into the viewer's brain.

"In this era of CG effects, horror movies don't seem as ambitious with that kind of stuff," Kostanski says. "It seems like people are taking a simpler route, where it's these people in a house dealing with one threat. We wanted to make something that was more expansive. For me a good reference point was the movie Phantasm, because it commits to its weird mythology and raises a ton of questions that have never been answered. I was pretty proud with how when the movie begins you have no idea where it's gonna end up. It's a pretty substantial escalation that I don't think is very common in a lot of horror movies these days."

"In my opinion, I don't think most modern horror movies are about anything at all," Gillespie adds. "But Steve's background is in practical effects so that certainly gave us a one up. For the two of us, the movie really came from the mythology. That kind of thing is where our two interests intersect, so we wanted to make a project built around that, where we're creating this dense, weird mythology. I don't think you see that in films so much these days. It's an interesting way of telling a story."

The Void's mythology is an ambitious one, and sets the movie up to make twists and turns that don't feel cheap and calculated simply to shock. In fact, the whole idea of the film came from one of the masters of horror mythology, Guillermo del Toro himself. Well, that and an isosceles triangle.

"That is the first image that started the whole movie and story," Gillespie says about the symbol, which recurs throughout the film in various ways. "I was working on a movie at Pinewood, and I was on a floor right beneath Guillermo del Toro, who was doing At the Mountains of Madness, before it went down. And so I remember trying to sneak around trying to see things, and I had heard him say he was going to be doing Lovecraft in a way that hadn't been done before. That sort of got the wheels in my mind working, trying to think of what that might be. So that was sort of where the imagery was birthed. All of this stuff relating to pyramids and triangles is left ambiguous, for the audience to interpret as they would, intentionally." 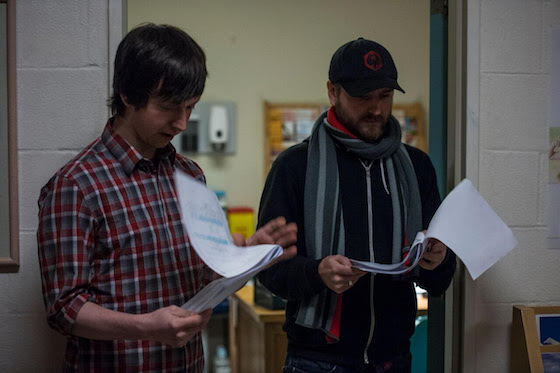 The whole reason why The Void exists today is because Gillespie and Kostanski managed to crowdfund the money they needed to build the practical creatures that appear onscreen (and freak the shit out of you throughout the film). Even though they raised 158 percent of their goal ($82,510 USD), they disagree that it was more than what they needed to actually make the film.

"It definitely wasn't more money than we needed," Gillespie says with a laugh. "It was more money than we were expecting though. It was a lovely surprise, but then we were surprised again by never having enough money. It's nice to know there is an audience waiting and this generosity to help you move forward with the project. Because without them, honestly, this movie could not been made."

Help also came from another film the two were simultaneously working on. Also shot in Ontario was David Ayer's Suicide Squad, for which Gillespie served as assistant art director and Kostanski as a special makeup effects artist.

"For The Void, a lot of people I worked with on Suicide Squad came over and joined our creature effects team," he says. "So for me, personally, being a part of that community, the film industry and being able to work with different people affords us a lot of opportunities."

No matter how much help they received, however, Gillespie and Kostanski will always remember making The Void as the biggest challenge of their careers.

"This movie certainly pushed everything to the extreme in what was possible," Gillespie says. "Every single thing was the biggest challenge. It was a soul-crushing nightmare. Everybody was pushed to the limit on this movie. The one ray of hope we got was the cast, which came together at the last second. They were easy to deal with."

The Void opens in Winnipeg on March 31, Toronto on April 1, Ottawa and Calgary on April 7 and Vancouver on April 8.