By Exclaim! Staff
Published Dec 18, 2018
While there were plenty of fun, exciting and downright profound things that happened in pop culture this year, it'd be dishonest to ignore the fact that there were plenty of letdowns. Whether they were half-decent projects that didn't live up to the hype, or bona fide stinkers, we've decided to count down the movies that left us feeling empty inside in 2018. To quote our parents, teachers and other authority figures over the years, we're not even mad — just disappointed.

10. A Star Is Born
(Directed by Bradley Cooper)
To be clear — calling a movie disappointing does not exactly mean it's bad. Remember when Hamilton was a brand new concept, and everyone outside of Manhattan only knew about it based on the online chorus of people singing its praises? Back then, we didn't realize it was just a goofy after-school special with hip-hoppity lessons about politics.

Similarly, when A Star Is Born played Cannes, it was met with extreme hyperbole. Accidentally breaking the review embargo, an early write-up from The Talkhouse compared it to Kubrick, Hitchcock, Cassavetes and Kazan. Of course, by the time we all saw Lady Gaga trace her finger down Bradley Cooper's nose before he later pissed himself onstage at an incredibly fake-looking Grammy ceremony, we knew the truth. A Star Is Born is like a bad episode of Nashville or a particularly strong episode of the awful Roadies. It's breezy popcorn fair for fans of pop and corniness.
Josiah Hughes

9. Mid90s
(Directed by Jonah Hill)
Again — Mid90s was well-crafted thanks to its eye-popping cinematography, undeniably great subject matter and addictive (if on-the-nose) soundtrack. But Jonah Hill's directorial debut was also so incredibly self-aware and superficial that it almost felt like branded content. Sure, teens skateboarding and playing Sega Genesis is catnip for a certain generation of fans, but the Harmony Korine cameo showed Hill's hand — this is just pure homage, all style and no substance. As such, Mid90s is both a fun movie and a missed opportunity.
Josiah Hughes 8. A Wrinkle in Time
(Directed by Ava DuVernay)
A Wrinkle in Time, on paper, sounds like the perfect fantasy film for today's audiences hungry for more varied voices in cinema. An adaptation of a beloved children's novel, featuring a strong female protagonist, talented women of colour in leading roles, and a prolific black female director with a talent for shooting gorgeous and powerful films? What could go wrong?

Unfortunately, a lot did — awkward, stilted dialogue lifted from the book that sounded unnatural coming out of actors' mouths, bold performances that were more cheesy than touching. And even though this is definitely a visually stunning film, the reliance on aesthetics borders on garish. It's tough to strike a balance between telling an emotionally compelling story and deliver fantastical CGI wonderment, and A Wrinkle in Time, despite having the best of intentions, never hits its stride.
Laura Di Girolamo

7. A Futile & Stupid Gesture
(Directed by David Wain)
What could have been a fascinating look at the intersection of comedy and social progress was instead an incredibly Netflix-y Netflix movie from David Wain. Neither particularly funny nor interesting, this look at the early days of National Lampoon played out like a web series, complete with bad wigs, throwaway gags and a poorly utilized cast of comedy heroes. Add in an unnecessary meta plot-framing device, and the whole thing lived up to its title in all the worst ways.
Josiah Hughes 6. Venom
(Directed by Ruben Fleischer)
One of comics' most badass anti-heroes got a truly baffling first flick with this perplexingly bad movie. Venom strived for both comedy and grit, but ultimately wound up feeling like a shoddy knockoff of The Mask that you discovered in a discount VHS bin in 1999. The weird tone was further amplified by Tom Hardy's audaciously awful accent. Sure, as both Eddie Brock and Venom, he was intending to play two roles, but his constant switching from English to faux-American accents made him seem like at least four different people throughout. It's no wonder we love Tom Hardy in movies where he barely speaks.
Josiah Hughes

5. I Feel Pretty
(Directed by Abby Kohn and Marc Silverstein)
In Venom, Michelle Williams' damsel in distress was offensively one-dimensional. In I Feel Pretty, she somehow played an even less human character — and she was the best part of the film. Abby Kohn and Marc Silverstein decidedly bit off way more than they could chew with this self-esteem dramedy that sees Amy Schumer's character find herself beautiful after a brain injury. No, seriously. Making matters worse, Schumer depicts her newfound self-love by pantomiming shock at her own appearance in the mirror. So stupid that it truly does warrant a watch, I Feel Pretty makes Zoolander look subtle.
Josiah Hughes

4. The Cloverfield Paradox
(Directed by Julius Onah)
Between 2008's Cloverfield and 2016's 10 Cloverfield Lane, there was every reason to assume this latest instalment in the franchise would be another thrilling sci-fi horror. Sadly, this straight-to-Netflix stinker squanders the Cloverfield name with an absurd plot about space travel and alternate dimensions. With barely developed characters and wacky deaths galore, it uses the idea of parallel realities as a catch-all explanation for simply not making much sense.
Alex Hudson 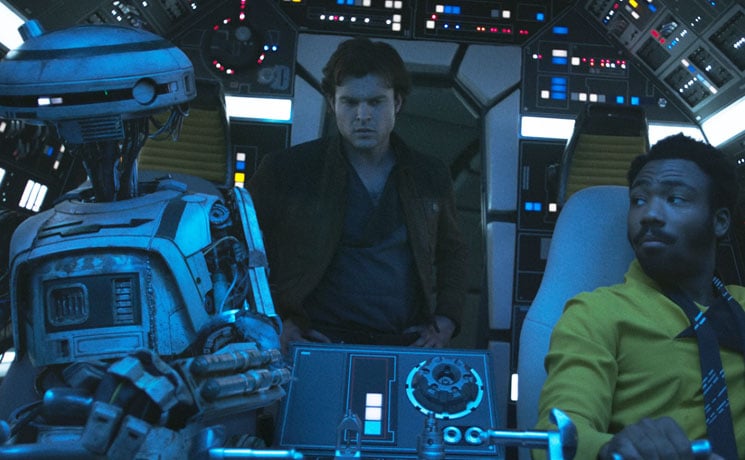 3. Solo
(Directed by Ron Howard)
Answering the question of whether or not there's such a thing as too much Star Wars, Ron Howard's Solo so underwhelmed pretty much everyone that it made Disney actually re-think their plans for shoving another million spinoffs down audiences' throats over the next few years. Fraught with problems behind the scenes from the outset (Howard replaced original directors Chris Lord and Phil Miller), this rather unnecessary instalment fills in Han Solo's back-story while aiming squarely for the fan-boys with plenty of in-jokes and nudge-nudge references to the earlier films in the series. At least Donald Glover is fun as a young Lando Calrissian and Alden Ehrenreich does a passable job with the unenviable task of stepping into the shoes of Harrison Ford.
Kevin Scott

2. Ocean's 8
(Directed by Gary Ross)
Between the dynamite cast and the impressive legacy of the Ocean's franchise, there was every reason to assume that Ocean's 8 would be a clever, witty romp. Unfortunately, the filmmakers forgot the key element of a heist movie: tension. The whole caper is a total breeze, and any minor obstacles are quickly and implausibly dealt with. A robbery has never looked so easy, and a heist movie has never been so dull.
Alex Hudson 1. Suspiria
(Directed by Luca Guadagnino)
Between the iconic source material and Thom Yorke's haunting score, Suspiria built up a ton of hype and then fell way short. Between its surreal montages, seemingly endless dance sequences, and a runtime of more than two hours, it's a serious slog to make it through this thing. Then, when you finally get to the end, it suddenly erupts into a ridiculous B-movie full of exploding heads and comical witchiness. It's too silly to work as a mood piece, but way too dreary to be an Evil Dead-style gore-fest — plus it's not scary at all. Throw in Dakota Johnson's total lack of charisma, and Suspiria commits the worst possible crime for a horror movie: It's boring.
Alex Hudson