By Sarah Murphy
Published Dec 29, 2016
Steve Martin has elicited too many laughs to count over the course of his hilarious career, but the comedian has come under fire for a recent remark he made on Twitter about the late Carrie Fisher.

Fisher passed away on Tuesday (December 27), with many Hollywood stars taking to social media to pay their respects with touching tributes. Martin attempted to honour the actress with a tweet of his own, but has since removed it after a massive online backlash that deemed his comments sexist.

The now-deleted tweet read: "When I was a young man, Carrie Fisher was the most beautiful creature I had ever seen. She turned out to be witty and bright as well."

Many fans expressed outrage at Martin for objectifying Fisher, with New York Magazine going so far as to ask the comedian to "Please be better than Jabba the Hut." The accompanying article goes on to cite a recent interview in which Fisher rejects the "sex symbol" label and urges new Star Wars leading lady Daisy Ridley to "keep fighting against that slave outfit."

Remember Carrie Fisher for her talent, her feminism, her commentary on mental health — not for the way she looked https://t.co/R3eZqy6Ooh


Among those leaping to the defense of Martin are a lot of grumpy old men like Piers Morgan.

Feminism at its absolute worst.
How shameful to do this to a legend like @SteveMartinToGo, whose 'crime' was paying a woman a compliment. https://t.co/nec4DmmBqO

If you were upset by Steve Martin's tweet about Carrie Fisher, congratulations! You are officially addicted to outrage.

I'm going to be pissed off all day because people bullied Steve Martin into deleting a tweet about his friend, Carrie Fisher.


There were also some more measured responses to Martin's tribute, though.

Yes, Carrie Fisher fought against Princess Leia's sexual objectification. No, there was nothing wrong w/ @SteveMartinToGo's tribute to her.

Shaming @SteveMartinToGo and @Cinnabon to delete their Carrie Fisher tweets is literally the exact opposite of what you admired about her.

Know what Carrie Fisher would say about Steve Martin's tweet? I'm guessing she'd smile and say, "thank you." You know, like a normal person. 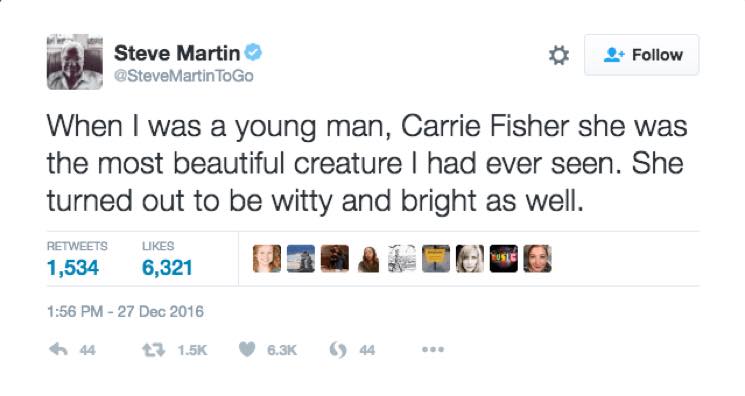