By Sarah Murphy
Published Jul 18, 2018
Netflix's hit revival of Queer Eye has just begun filming its third season, and viewers have some suggestions for who the next makeover recipient should be — Post Malone.

Yes, Twitter is abuzz with appeals to get the Beerbongs & Bentleys rapper redone by the Fab 5, and now both Malone and Karamo Brown (the Fab 5's culture expert) are aware of the internet's strange request.

When is someone going to call @QueerEye on Post Malone


In a since deleted tweet, @tsusnami reacted to the news of Season 3 by remarking: "first episode better be with post malone." 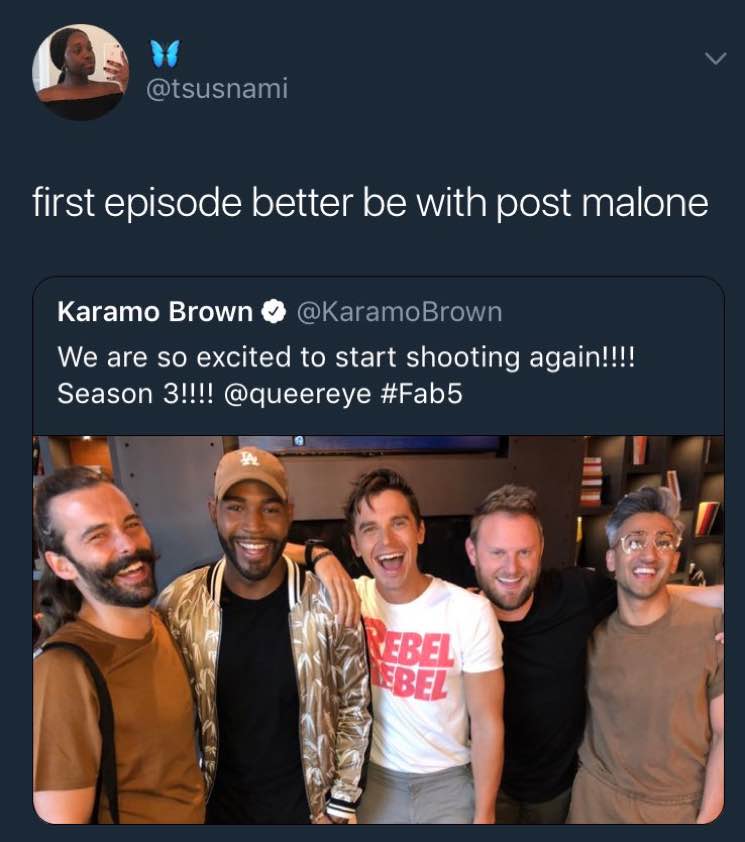 Sweet, naïve Karamo then replied to the initial tweet, asking what all the fuss was about.

Lol why does everyone want @PostMalone to be on the show. Did he request it?


Posty himself then jumped in, explaining that "they just think I'm ugly and smell." He also shared his appreciation for the show so far and encouraged the Fab 5 to "keep crushing it."

no they just think I'm ugly and smell lol. love the show tho guys, keep crushing it


Malone also replied to the original tweet, and seemed to deny that he smells as bad as he looks like he does.

have u ever smelt me😑


Some of his fans beg to differ, though.

hobi said u smell like burnt tires and asphalt


Here's hoping if Post Malone does end up on Queer Eye, it's not in Smell-O-Vision.