By Calum Slingerland
Published Nov 06, 2019
Michael Jackson's iconic glittery gloves have sold for thousands  on the auction block in recent years, and if anyone is looking to further accessorize before the decade is out, a pair of sparkly socks will hit the auction block at a much higher price point.

Crystal socks worn by Jackson when he performed his iconic "Moonwalk" dance move for the first time are expected to fetch between $1 million and $2 million USD when they head to auction on November 13. Said to be in "very good, stage worn" condition, the socks come in a plexi display box alongside a letter of authenticity.

A listing from auctioneer GottaHaveRockandRoll notes that Jackson sported the socks while performing "Billie Jean" at the "Motown 25: Yesterday, Today, Forever" concert, which was taped before a live studio audience at California's Pasadena Civic Auditorium on March 25, 1983. It notes Jackson then subsequently gifted the socks to manager Frank DiLeo during his 1984 "Victory Tour."

You can find a photo of the socks and letter below, and can view the auction listing here. The minimum bid for the pair is presently set at $100,000 USD.

Allegations of child molestation against Jackson were raised again in this year's Leaving Neverland documentary, leading "Weird Al" Yankovic to retire his Jackson-inspired parodies and The Simpsons to pull a Jackson-assisted episode off the air.

In spite of that, it was recently reported that a Jackson-inspired musical would open on Broadway next year. 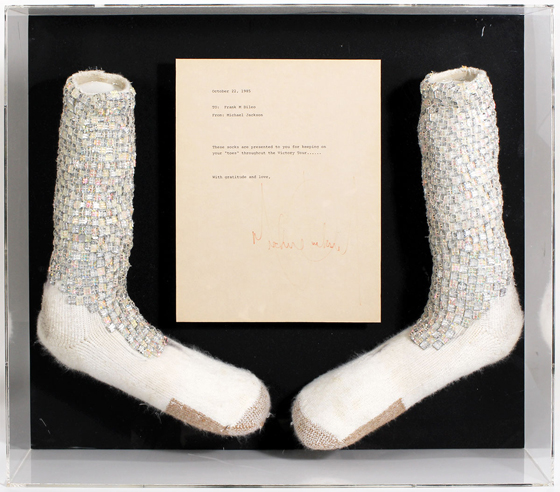