Drake Is Upset at the City of Pickering's Wi-Fi

By Calum Slingerland
Published Jul 31, 2019
Last month, Drake let listeners know that he was back in "album mode" after a few weeks of living it up on NBA sidelines. But as the rapper revealed last night, work on more new material was hard to accomplish with a slow internet connection.

Taking to Instagram last night (July 30), Drake put out an open call to Pickering, Ontario, mayor David Ryan to "set up stronger wi-fi towers so @Boi1da can be able to send me all his newest beats."

Boi-1da also informed Canada's telecom giants of the request on Instagram in trying to the get the pair's "cook up" started. The connection issues seemed to persist, with the producer tweeting today, "I don't pay these insane taxes to be dealing with this, and nobody from this city or neighbourhood does or deserve this." 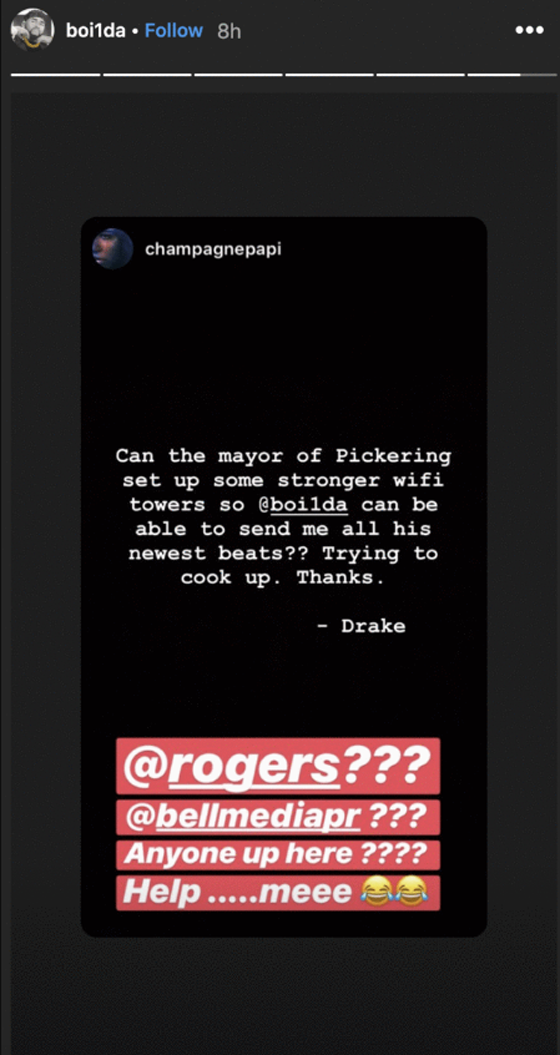 In response to Drake's request, the city of Pickering penned him a lengthy open letter shared on Facebook today, riddled with references to his catalogue. It reads in part, "I'm Upset that @boi1da was having trouble with our public WiFi. It's the Best I Ever Had, so I'm not sure why Matt couldn't link up proper."

The city wrote that they're "working on expanding and strengthening Pickering's broadband network so there will be fast and reliable internet service whether it's in Matt's crib or Marvin's Room," adding, "God's Plan? Nah – it's the Mayor & Council's plan. We want to attract the best and brightest residents and businesses here. Two Birds One Stone. That's The Motto (unofficially)."

The city's letter also mentioned that Boi-1da had some help from former Toronto city councillor/sentient 30 Rock meme Norm Kelly, who personally called mayor Ryan about the wi-fi request this morning. You can read the entire thing below.