POSTDATA, Ellis, NADUH, Kirty and more reveal the music posters on their walls

By Alex Hudson
Published Aug 05, 2021
Pretty much every teenager has music posters on their bedroom wall. But keeping band posters into adulthood? That's the sign of a true music lover.

As live music returns across the continent, we reached out to some Canadian musicians to show off the concert posters that they've managed to hang onto. They reminisced about everything from underground punk shows in the UK to big cross-Canada tours, and even one very special-sounding secret Feist show.

Check out these artists' coolest music posters below. 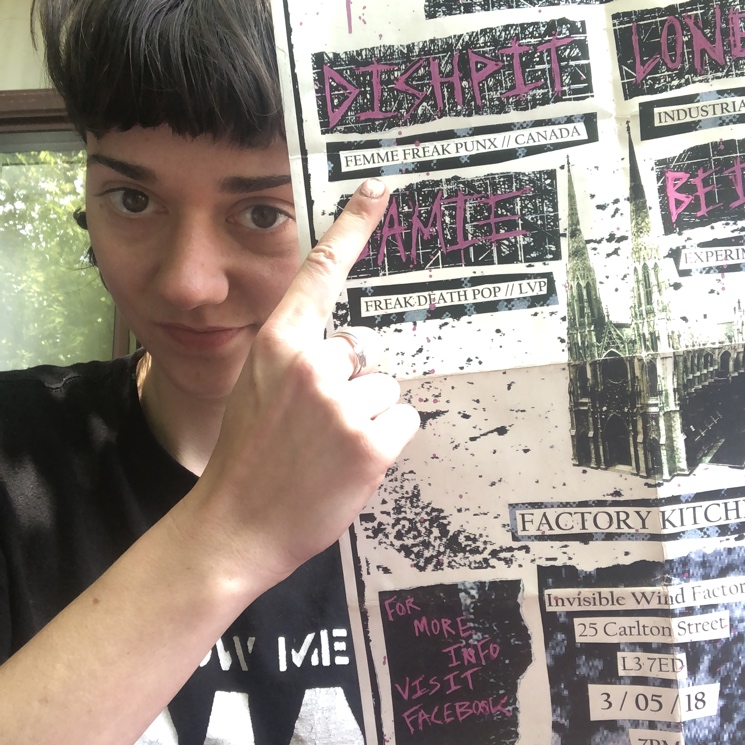 A few years before Montreal post-punks DISHPIT released their debut album, this year's Steve Albini-produced DIPSHIT, they went on their first-ever tour in England. For much of that 2018 outing, they stayed at a punk house in Liverpool, and their hosts organized this show in a kitchen. "Liverpool is kind of like Detroit," explains singer-guitarist Nora Kelly, "There's tons of abandoned factories and warehouses." Kelly adds that the show was memorable for more than just the music: "I remember having a huge crush on the bartender that night."

Ellis
Allison Crutchfield at the Silver Dollar
Toronto, ON
April 5, 2017 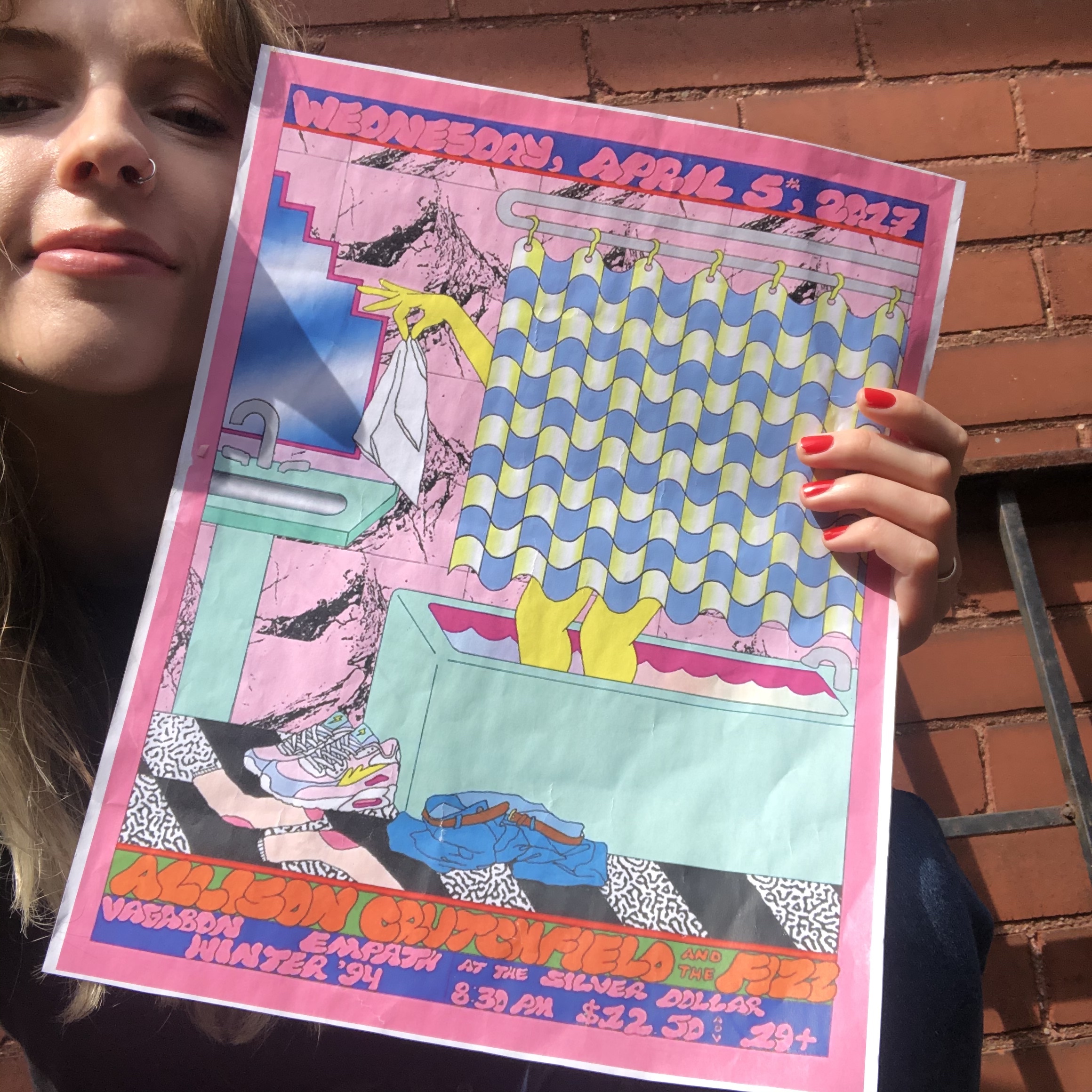 Ellis songwriter Linnea Siggelkow has moved apartments a few times since the show in 2017 — but she's brought this poster along to each new spot, even though it's just printed on a standard piece of printer paper. The shoegazing songwriter, who released her new EP nothing is sacred anymore in June, explains, "I snagged this poster on my way out because I wanted to remember that night forever."

Steve Rigby of the Jerry Cans
Fucked Up at the Underdog
Peterborough, ON
February 3, 2007 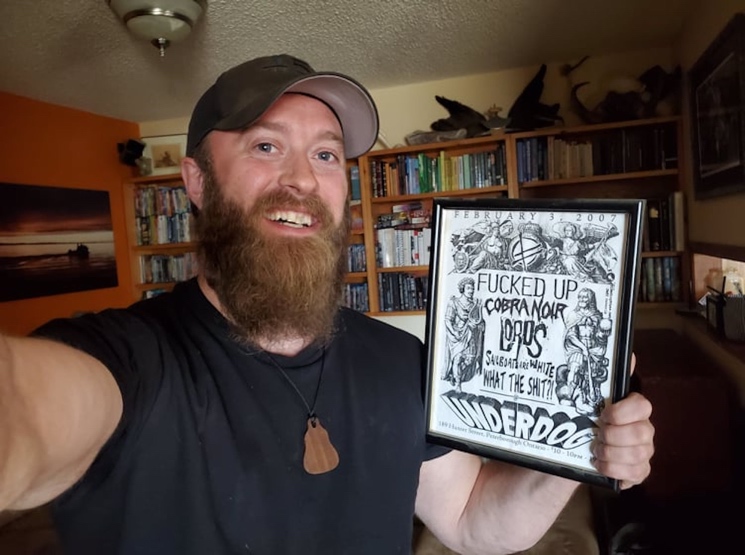 Before the Jerry Cans formed in Iqaluit, NT — and most recently released last year's Echoes — three of the members played in a Peterborough, ON-based band called What the Shit?! It was with that folk-punk band that they got to open up for the similarly profane Fucked Up at their favourite local venue, the Underdog. "We cut our teeth playing sweaty punk shows, and that one was extra sweaty," drummer Steve Rigby remembers. 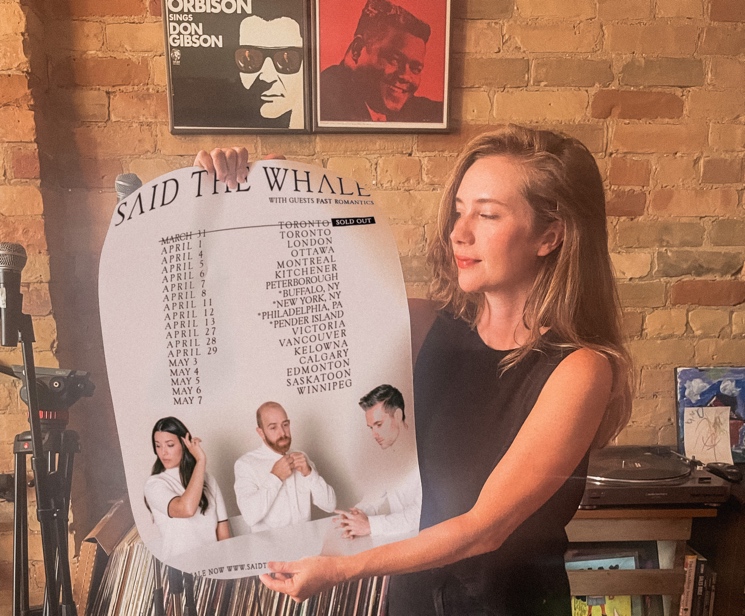 In addition to her solo pop-rock project — her new album, We Are All on Fire, arrives August 20 — Toronto songwriter Kirty is a member of the indie rock group Fast Romantics. That band's 2017 tour with Said the Whale was a memorable highlight, and she cites the Vancouver date as one of her favourite-ever shows. "Each night was a fun hang with the kind folks in Said the Whale, and an opportunity to kick back after our set was done and watch them play," she tells Exclaim! "To cap off the tour, we booked a crazy-fun night at a bowling alley in Winnipeg and let loose to celebrate the end of tour. Aw, the memories!" 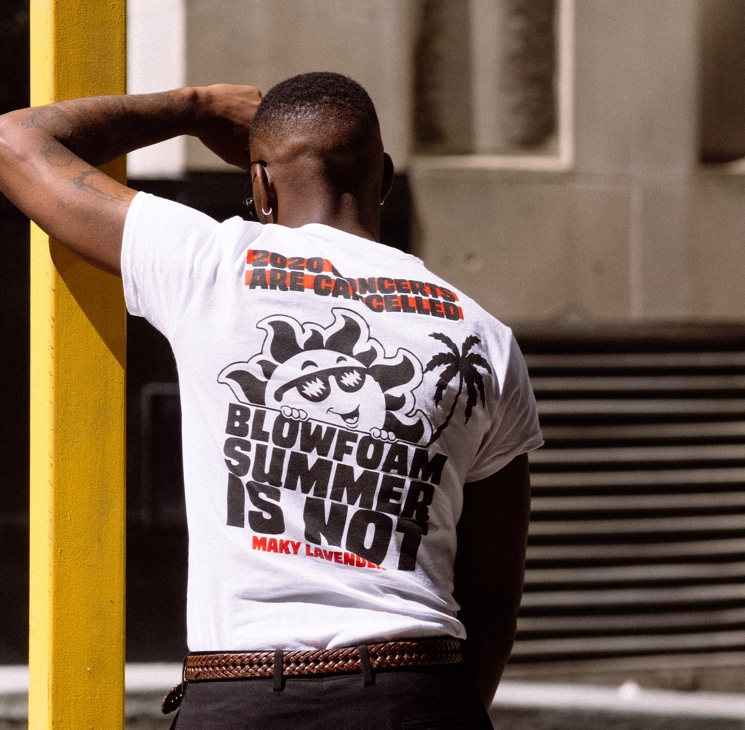 Bilingual Montreal rapper Maky Lavender released his debut album, ...At Least My Mom Loves Me, on February 29, 2020 — just a couple of weeks before touring ground to a halt due to the pandemic. "I was planning to go on tour and make tour T-shirts of all my summer shows," he tells Exclaim! "The shows got cancelled and we still made the shirts. And I plan on wearing them during all my 2021 dates." The dates for his upcoming Quebec shows can be found on Bandcamp. 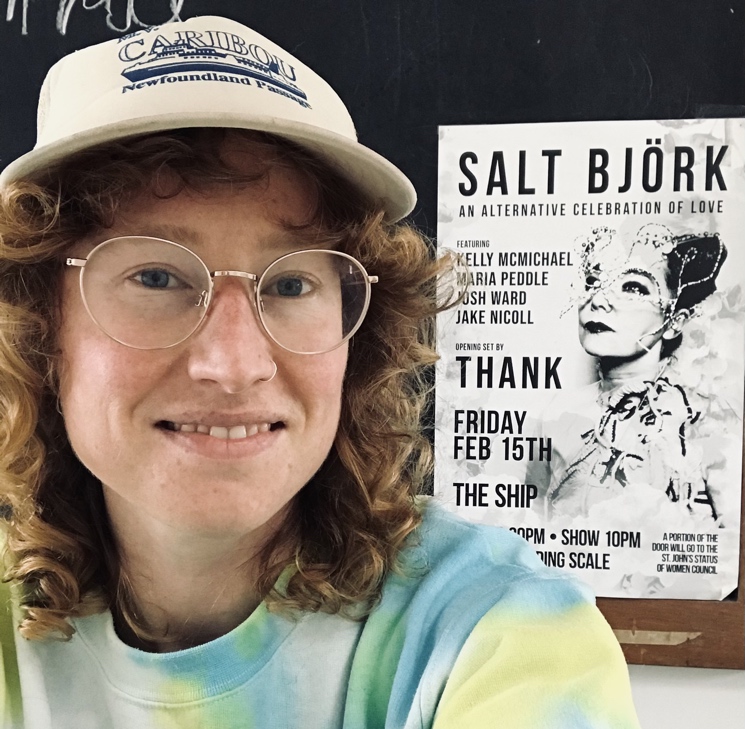 Kelly McMichael's new album, Waves, has strains of '70s rock, '80s pop and modern indie — but her tastes also extend to Björk, and she cites this tribute night as possibly her favourite show she's ever participated in. She explains, "Learning and singing Bjork's bizarre and genius arrangements was a huge challenge and so, so rewarding. What a joyous evening." The icing on the cake was the venue itself, as she calls the Ship "a classic, fave spot." 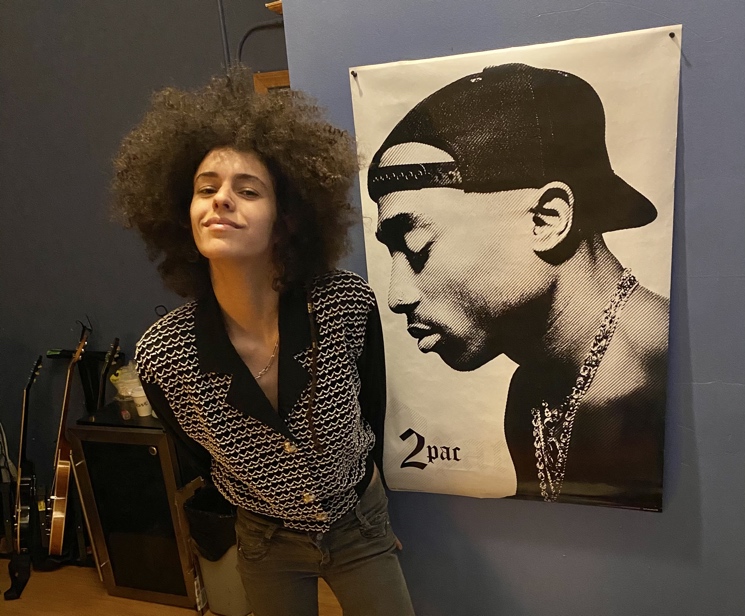 Vancouver hip-hop collective NADUH learned their craft by studying the classics. The group's Rosita Alcantara remembers, "When I was a kid, I would steal my older brother's MP3 player, hit shuffle, and tracks like 'Thugz Mansion' and 'Changes' by 2Pac were on there. This was my entry into rap and hip-hop." Fast forward to the present day and Alcantara is paying tribute to 2Pac with this poster. 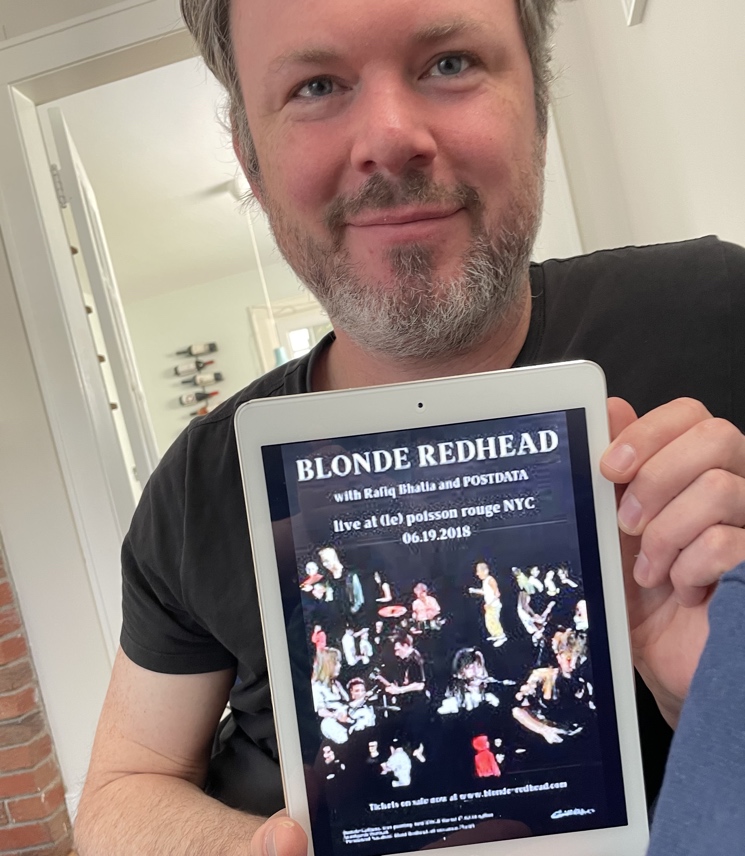 Paul Murphy was a Blonde Redhead fan long before he rubbed shoulders with them. His band Wintersleep toured with Blonde Redhead in 2016, and BR member Simone Pace contributed to POSTDATA's 2018 album, Let's Be Wilderness. This eventually led to POSTDATA performing a stripped-down opening set during Blonde Redhead's hometown show at (Le) Poisson Rouge.

"Tim [D'Eon] and I drove for nine hours and crashed on a friend's couch and floor, respectively," he remembers. "The audience was receptive to the music, or at least extremely polite, and the set went really well. And, of course, after I played I got to watch Blonde Redhead absolutely crush it in such an intimate space. Dream."

POSTDATA's latest album, Twin Flames, came out back in March.

RALPH
Feist at the Cameron House
Toronto, ON
October 29, 2008 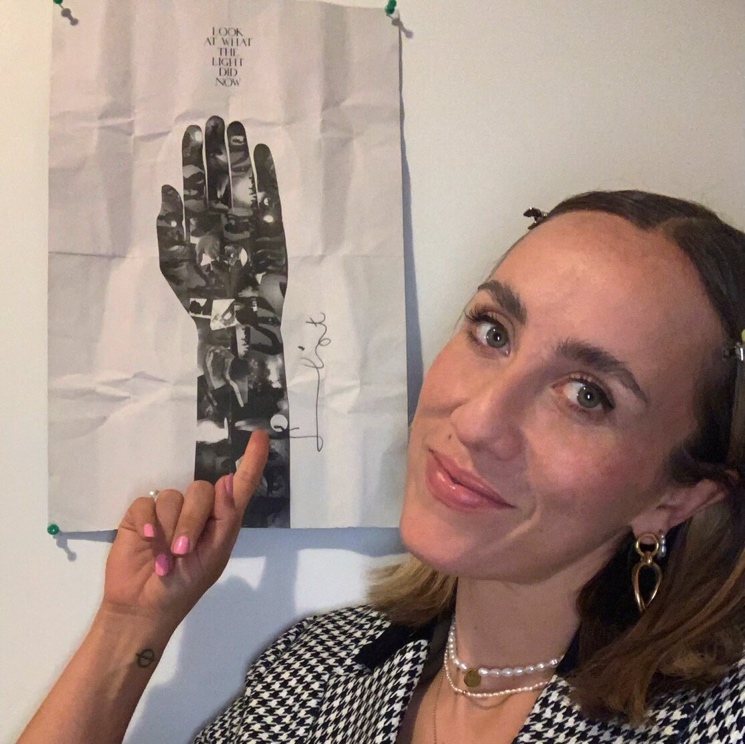 Long before Toronto songwriter RALPH began releasing bubbly pop bangers — as heard on this year's Gradience EP — she was lucky enough to catch Feist at an intimate secret show. Ralph remembers, "I ran over and waited in this mysterious long lineup. They finally announced they were only letting in 100 people; I was number 101. The guy in front of me could tell how upset I was, so he let me take his spot and I JUST made it in." The ensuing show was just as magical as expected, and Ralph calls it "a moment that made me feel driven to become an artist and performer." 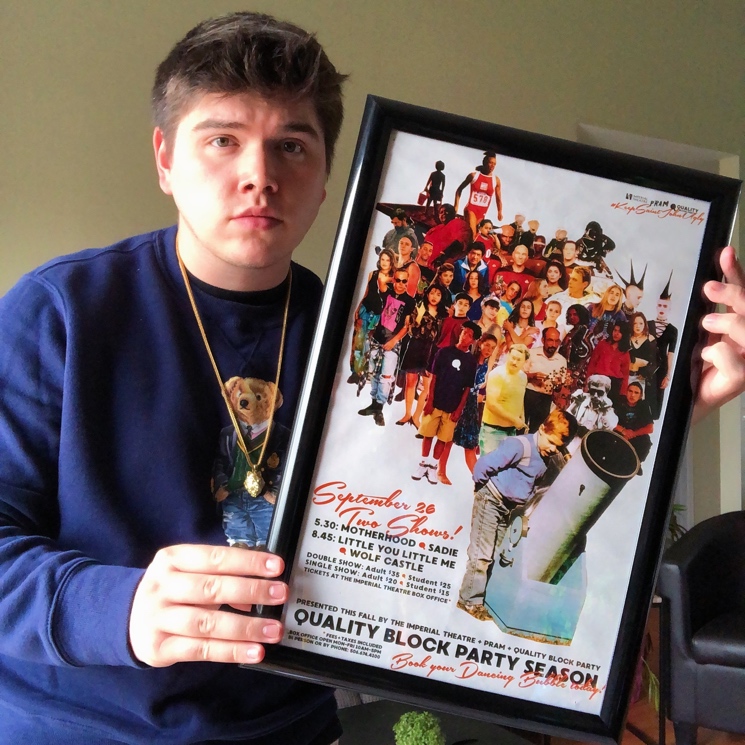 The Atlantic Bubble meant that Canada's East Coast was able to retain some measure of normalcy during the lockdowns of 2020 — which is how Pabineau First Nation rapper Wolf Castle (a.k.a. Tristan Grant) was able to perform at a live show in September 2020, albeit one with strict distancing protocols.

"Not only is this poster a badass design, it represents a glimmer of hope in a sea of uncertainty," he says of the masked-up show. "It was cathartic to get on a stage and have a real audience with me for the first time that year. It was a testament to how the passionate music fans working in the industry are. We were incredibly lucky and grateful that we were able to pull this event off."