An Essential Guide to Stephin Merritt and the Magnetic Fields

By Alex Hudson
Published Feb 28, 2017
The recorded output of Stephin Merritt — the songwriting brains behind the Magnetic Fields and an assortment of side-projects including Future Bible Heroes, the 6ths, the Gothic Archies and various solo endeavours — is massive.

Since the early '90s, Merritt has released approximately two-dozen full-lengths, plus various singles and EPs, but scanning his lyric sheets for personal details is a hopeless task: he disavows any autobiographical interpretation of his work, instead occupying the voices of characters and frequently handing off his songs to a changing cast of singers and collaborators. He has released dozens — possibly hundreds — of songs about love, but remains unclear on what he actually thinks of the subject. In one 1995 interview with Billboard, Merritt said that he asked his collaborators to sing his songs without emotion, adding, "I'm certainly not trying to express myself."

Merritt's nothing if not sardonic. Known for his charmingly prickly disposition, he holds journalists at an arm's length during his cynical and sometimes confrontational interviews and has been known to razz crowd members. (This writer is speaking from first-hand knowledge: Merritt remains the only interview subject I've ever had flatly refuse to answer an innocuous question about his songwriting process.) His wry wit can be heard in his songs, which are often laugh-out-loud funny and sometimes comically violent.

And yet, despite Merritt's grumpy outlook and his fondness for lyrical artifice, his songs can be emotionally nuanced and devastatingly beautiful. His best songs are full of high-flung fantasies and imaginative characters, but are also genuinely poignant; a huge selection of wedding videos, for example, have been set to Peter Gabriel's cover of the Magnetic Fields' "The Book of Love."

A trip through Merritt's huge catalogue contains many moments of heart-wrenching brilliance, but it can be difficult for new listeners to know where to begin — after all, his catalogue is only getting bigger with the Magnetic Fields set to release the sprawling 50 Song Memoir on March 10. With that in mind, let's jump into Exclaim!'s Essential Guide to Stephin Merritt. 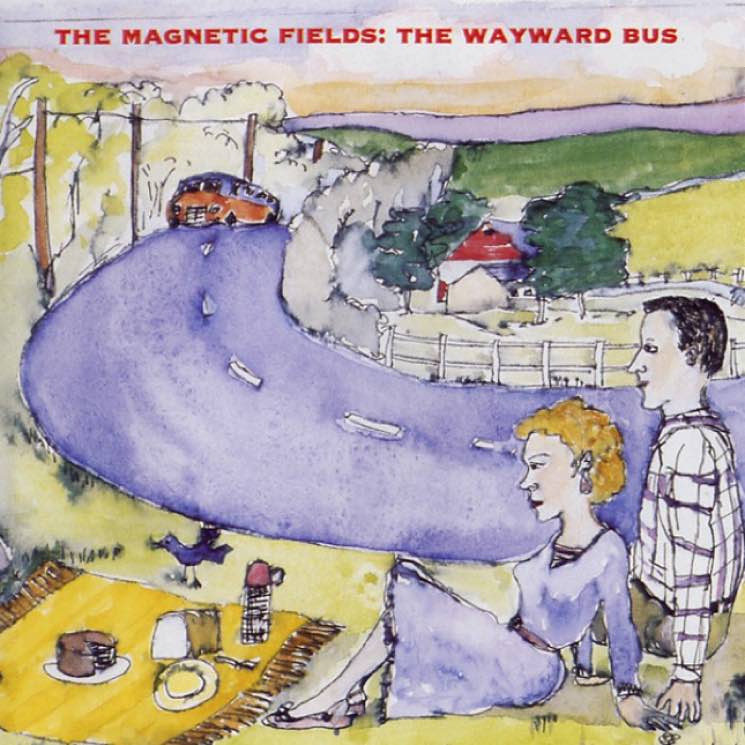 It might be cheating to include this as a single entry on this list, since it's actually a compilation of the Magnetic Fields' first two albums, 1991's Distant Plastic Trees and 1992's The Wayward Bus. The albums were packaged together for a 1994 reissue on Merge, and they've been released as one ever since. The two records hold together well as a single statement, though: the band's synth-pop is more lo-fi here than on subsequent releases, and these are the only albums to feature lead singer Susan Anway before her departure from the group.

Of the two halves, The Wayward Bus is stronger and more consistent, but it's "100,000 Fireflies," a song from the weaker, more experimental Distant Plastic Trees, that stands out as arguably the most essential song here — and maybe in the Magnetic Fields' entire discography. A delicately twee pop ditty, its arrangement consists entirely of plinky keyboard chimes and a distantly thwacking drum machine. Anway's aching delivery is vulnerable as she delivers the opening lyrics that perfectly capture Merritt's masterful blend of romance and cynicism: "You won't be happy with me / But give me one more chance / You won't be happy anyway." 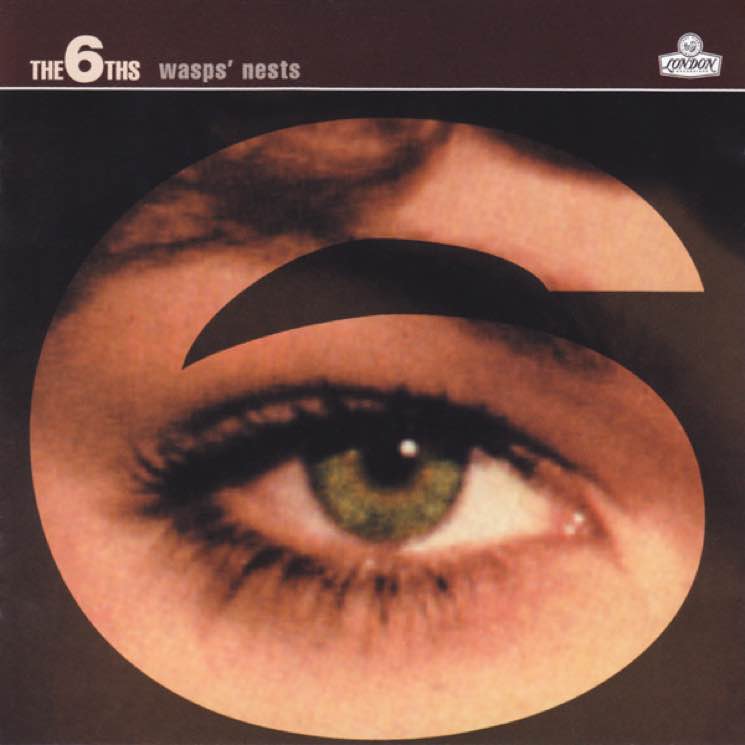 Generally speaking, Merritt tends to save his best work for his best-known project, the Magnetic Fields, with his side-projects existing primarily as palate-cleansers and opportunities to explore other songwriting styles. One notable exception, however, is this excellent album by the 6ths.

Merritt supposedly conceived of the 6ths as a tribute act to himself, recruiting a cast of notable indie rockers to sing a selection of new tunes. Merritt himself sings just one song on Wasps' Nests, with guest vocalists including Mac McCaughan (Superchunk), Lou Barlow (Dinosaur Jr., Sebadoh), Dean Wareham (Galaxie 500, Luna), Georgia Hubley (Yo La Tengo) and more.

Despite the star-studded cast, Wasps' Nests sounds much like many other of Merritt's other mid-'90s releases. The palette is synth-pop, and the notable vocalists never steal too much attention away from the primary attraction: Merritt's songs. The instrumentation and songwriting style are so distinctive that the fact that the album contains 16 different lead singers somehow doesn't disrupt its cohesive flow.

The mid-'90s were a glorious high point for Merritt, when he could seemingly do no wrong (but more on that later).

3. The Magnetic Fields
The Charm of the Highway Strip
(1994) 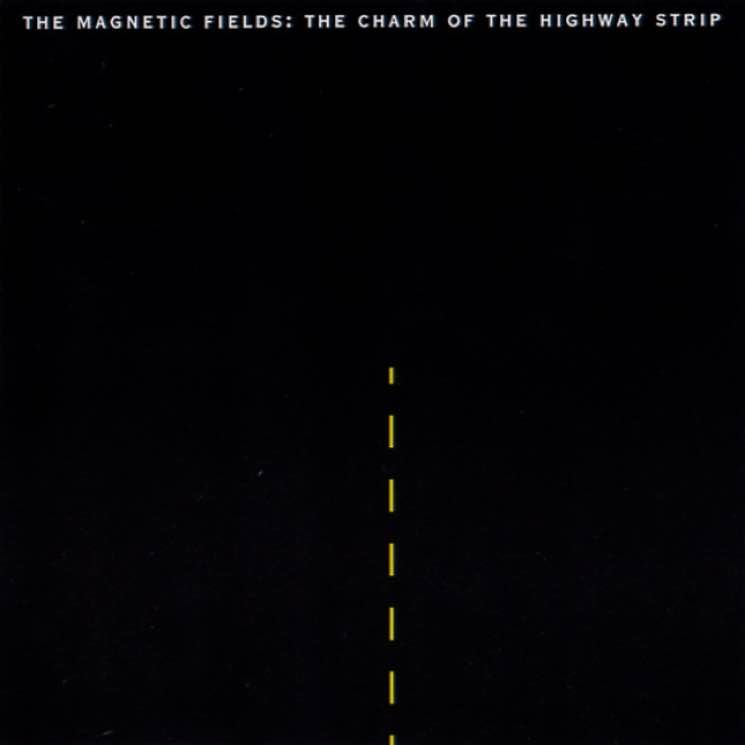 What would it have sounded like if Woodie Guthrie had been armed with a synth and a drum machine instead of an acoustic guitar? The Charm of the Highway Strip answers that question with downcast tales of life on the road, traditional-sounding in composition but not in instrumentation. Many of the songs feature acoustic guitars, and it's easy to imagine what they might have sounded like as stripped-down folk songs. Rather than playing it straight, however, Merritt and company layer the arrangements with pattering beats and nocturnal synth textures (the ghostly atmospheres of which perfectly complement the pitch-black highway depicted on the album cover).

This is the Magnetic Fields at their most concise and focused. The 10 tracks clock in 33 minutes, and all of them concern the lonely life of a traveller. The album is humble in scope, but there's a quiet majesty in Merritt's tales of the open road: Arcade Fire recognized this and performed a comparatively grandiose, decidedly earnest version of "Born on a Train" on KCRW's Morning Becomes Eclectic in 2005. 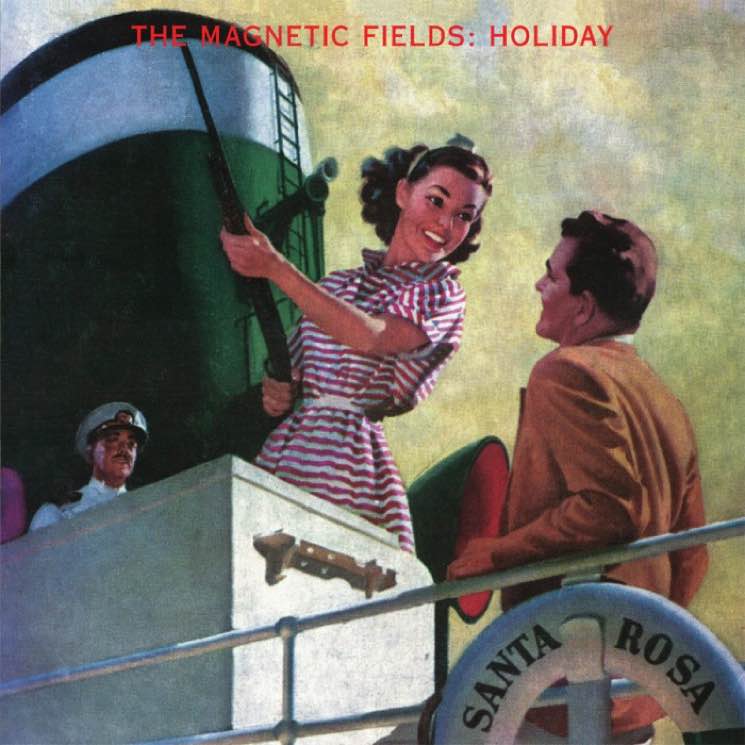 Although Holiday isn't Stephin Merritt's defining statement, it's the most consistent and cohesive album in his discography. While Merritt is commonly known for his prolific output and lack of quality control, he was on a remarkable roll in the mid-'90s: Holiday came out just five months after The Charm of the Highway Strip, and was soon followed by an outpouring of intriguing side-projects.

This is the highpoint of the Magnetic Fields' early phase, when Merritt and company focused almost exclusively on synth-pop. "Strange Powers" is a bubblegum-sweet tale of infatuation, "The Trouble I've Been Looking For" contrasts breezy pop melodies with abrasive synth dives and psychedelic closer "Take Ecstasy with Me" is better suited to daydreaming than party drugs. On Holiday, Merritt wasn't concerned with high-flying concepts or ambitious experiments; he was simply making great songs. 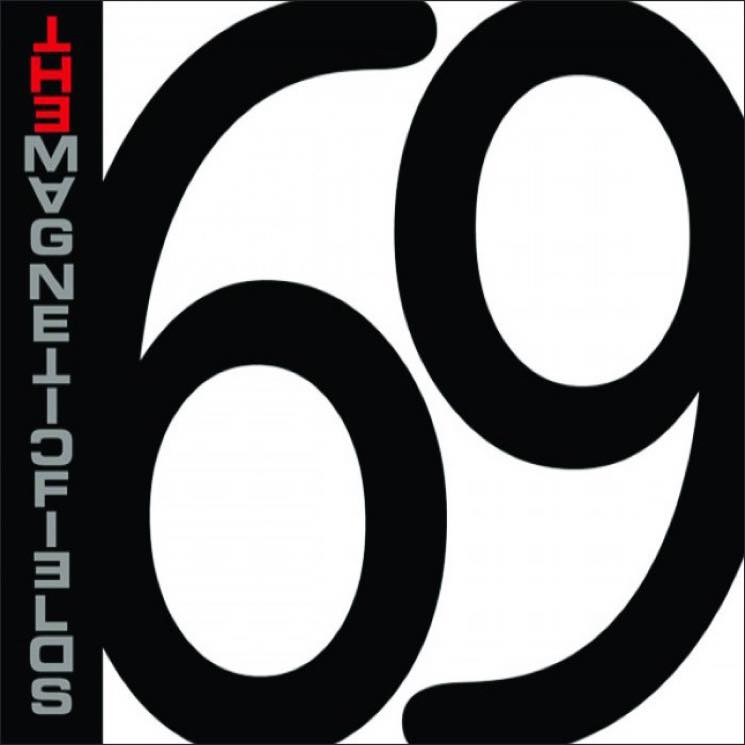 Merritt is a one-man songwriting factory, and the triple-album 69 Love Songs is his most sprawling, ambitious masterpiece. It's wildly inconsistent, both in terms of genre and quality, the kind of record on which the reverb-swathed, jangle-pop brilliance of "Yeah! Oh, Yeah!" gives way to the irritating throwaway sketch "Experimental Music Love," only to be followed by sneering ukulele gem "Meaningless."

But these ups and downs are all part of the fun; as with other epic-length LPs (such as The White Album), the lack of quality control adds to the sense of playful unpredictability. With a project like this, the sheer magnitude is part of the appeal.

And when the songs are good — as they very often are — they're simply brilliant: "The Book of Love" is the most touching love song in Merritt's repertoire, "I Don't Want to Get Over You" highlights his talent for packing clever internal rhymes within a catchy pop melody and the gorgeously dreamy "The Death of Ferdinand De Saussure" is filled with brilliant observations like "You can't use a bulldozer to study orchids."

69 Love Songs represented a turning point for Merritt and the Magnetic Fields. It was the final album of the band's brilliant '90s run, and the moment when they shifted from poignant electro-pop to a genre-jumping style that fully embraces theatricality and artifice. There are songs here that hint at the directions they would go during their post-millennial "no-synth trilogy": "I Think I Need a New Heart" hints at the playful acoustic pop of 2004's i, "When My Boy Walks Down the Street" is a dead ringer for the fuzzy clang of 2008's Distortion and "All My Little Words" paves the way for the baroque flourishes of 2010's Realism. 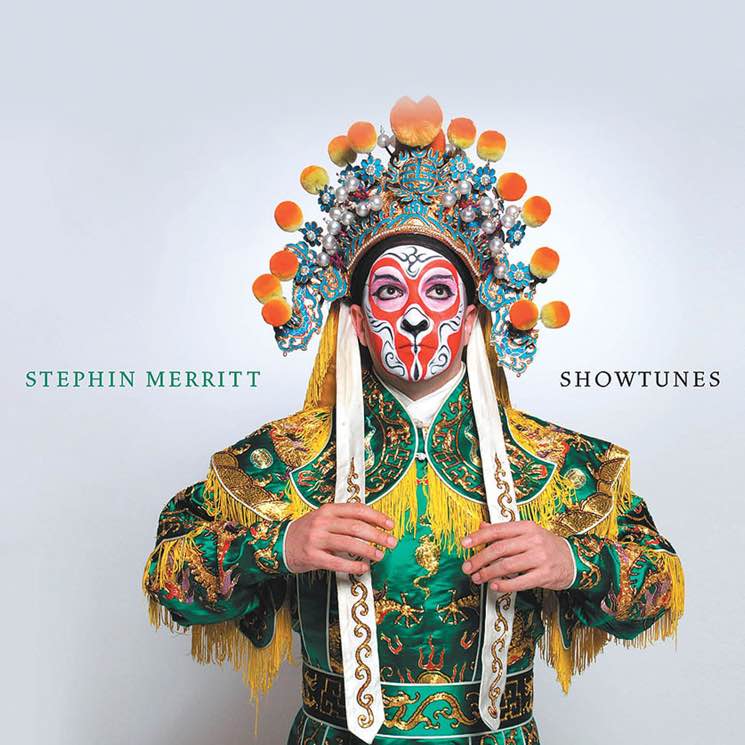 Last decade, Merritt soundtracked a few pieces of musical theatre: Orphan of Zhao (2003), Peach Blossom Fan (2004) and My Life as a Fairy Tale (2005). Perhaps these songs were enjoyable in a theatrical context, but with their Chinese instrumentation and over-the-top vocals, the soundtracks are equal parts schlocky and dull. And good luck making it through the 2006 theatrical compilation Showtunes, which has an interminable 26-song tracklist. 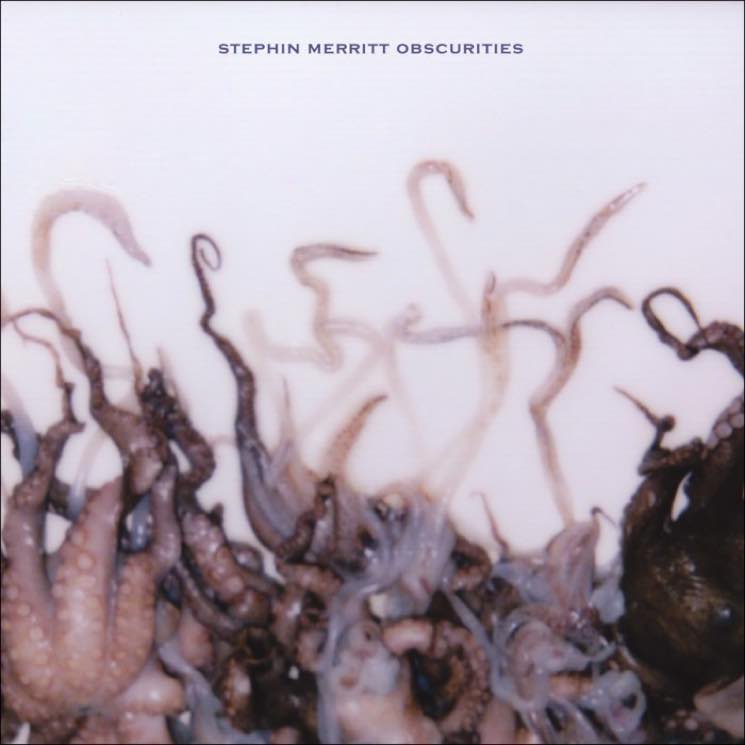 Counterintuitively, one of Merritt's most satisfying and consistent albums is his 2011 odds 'n' sods compilation Obscurities. Released under Merritt's own name (despite containing songs from the Magnetic Fields and the 6ths), it brings together a variety of '90s material, including seven-inch tracks, compilation cuts, selections from an unfinished musical and unreleased outtakes. It all holds together surprisingly nicely as a cohesive album.

Once you've made your way through the Magnetic Fields' classic '90s material, the natural next step is to check out their post-millennial work, where they dabble in a range of synth-free sounds. All of the albums have wonderful highlights, even if they also feature some less essential material: in particular, check out "I Thought You Were My Boyfriend" from i (2004), "California Girls" from Distortion (2008), "You Must Be Out of Your Mind" from Realism (2010) and "Andrew in Drag" from Love at the Bottom of the Sea (2012).

And then, of course, there are all of the side-projects. The best, aside from the aforementioned album by the 6ths, is the Gothic Archies' 1997 release The New Despair. Essentially a solo vehicle for Merritt, this goth-tinged EP combines his usual pop witticisms with jet-black atmospheric touches. Also check out the work of Future Bible Heroes: this collaboration between Merritt, singer Claudia Gonson and electronic producer Chris Ewan has resulted in three synth-pop albums that sound almost indistinguishable from the Magnetic Fields.