Many have drawn comparisons between the two songs, with a mashup originally posted to TikTok having wracked up over two million views on YouTube. Now, a listing in the American Society of Composers, Authors and Publishers (ASCAP) repertory names Williams and Farro as writers on "good 4 u" alongside Rodrigo and producer Dan Nigro. The song is the third single from Rodrigo's debut album SOUR, which made Exclaim!'s list of the best albums of 2021 so far.

Williams confirmed the news on her Instagram story, sharing Warner Chapell Music's story post about the song going number one at Top 40, shouting out the Paramore frontwoman and ex-guitarist for their contributions to the track. She added: "Our publisher is wildin rn." 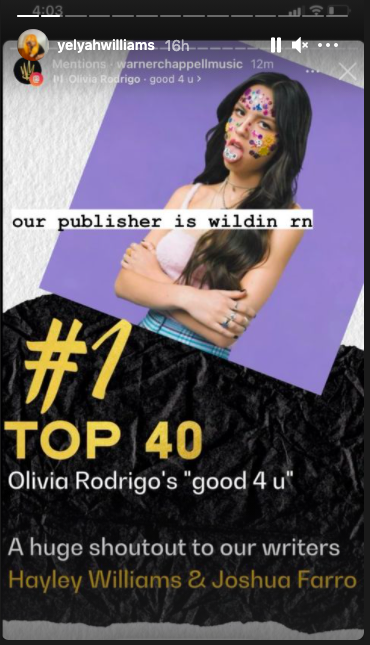 This news comes after last month's decision for Taylor Swift, Jack Antonoff and St. Vincent to be credited on Rodrigo's second single, "deja vu." The 18-year-old pop sensation and diehard Swift fan admitted that the song was heavily inspired by the 2019 Lover track "Cruel Summer."

She explained to Rolling Stone: "I wanted the last bridge to kind of go crazy and I love 'Cruel Summer,' it's one of my favourite songs ever. I love the harmonized yells she does. I feel like they're super electric and moving, so I wanted to do something like that."

Kudos to Rodrigo and her team for giving credit where they believe credit is due.

You can listen to the mashup of "good 4 u" and "Misery Business" below.