Grimes Blasts Juno Awards for the Lack of Women Nominees

By Brock Thiessen
Published Feb 02, 2016
In case you didn't notice, today was Juno day here in Canada. The annual awards event announced its 2016 nominees, and not everyone is happy with them — and that includes Grimes.

Tonight (February 2), the Canadian musician born Claire Boucher took to her Twitter account to criticize the Junos for not including nearly enough women among the nominees. You can see the string of tweets below.

UPDATE (02/03, 11:15 a.m.): Grimes has since deleted all her Juno posts, but not before tweeting to Exclaim! "I'm not blasting anyone, just discussing an issue, and I explicitly deleted my tweets to avoid inflammatory press like this." That said you can see screengrabs of the tweets below. 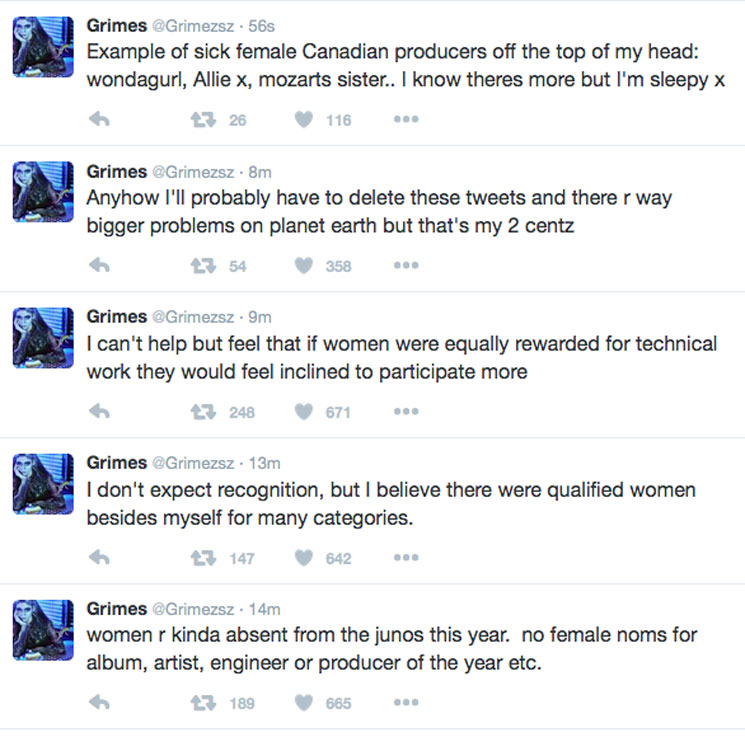 You can see the full of Juno nominees over here, which find male artists such as the Weeknd, Drake, Justin Bieber and Shawn Mendes leading the noms, though alongside Alessia Cara and Buffy Sainte-Marie.