By Gregory Adams
Published Jul 25, 2013
Atlanta trio Migos have captured the attention of the rap world with their "Versace" single, which has inspired the likes of Drake, Meek Mill and Angel Haze to spit in triplets on freestyles and remixes. Next up is generally smooth-singing R&B star Frank Ocean, though you'll have to imagine for yourself how his voice would tackle the trap tune, as he's only posted the lyrics.

Ocean's textual "Versace" verse was revealed via Tumblr, kicking things off with "Versace Versace I'll play the piano / I'm not Liberace." It's rumoured that the next pair of lines "You could stay seated I'm taking that Grammy / Your music is sloppy" references his Grammy win over parking lot rival Chris Brown earlier this year.

The rest of the lyrics include shout-outs to Beyoncé, Jay Z's other dance partner Marina Abramovic, the Three Tenors, and, naturally, Donatella Versace. You can read the sheet down below.

No word on whether Ocean's verse will ever be laid to tape, but rest assured there will probably be another handful of "Versace" freestyles before the summer is through. 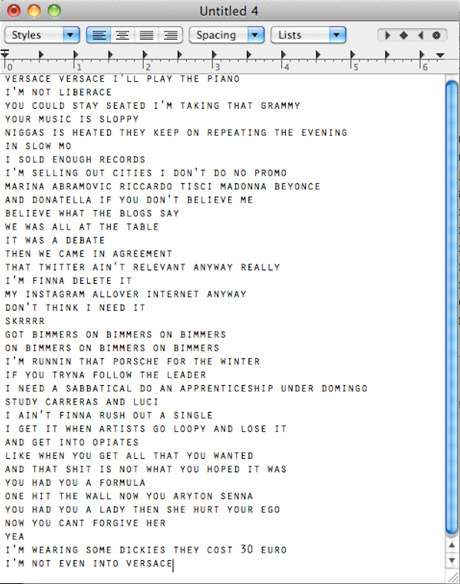