The couple have been together for almost five years

Asghari's talent manager Brandon Cohen (of BAC Talent) confirmed the news in a statement to CNN yesterday (September 12), saying: "The couple made their long-standing relationship official today and are deeply touched by the support, dedication and love expressed to them."

"I can't fucking believe it 💍💍💍💍💍💍❣️!!!!!!" Spears wrote in the caption of a video posted to Instagram, posing with her fiancé and showing off the ring. Designed by Forever Diamonds NY, "The Britney" is a four-carat brilliant stone with a platinum cathedral setting. The word "Lioness" — Asghari's nickname for Spears — is engraved on the band.

The pair met back in 2016 when the actor appeared in Spears' music video for "Slumber Party" — the Tinashe-featuring single from her ninth studio album Glory.

While Asghari clearly waited until the (foreseeable) end of Spears' abusive conservatorship to propose, fans and supports have expressed some concerns alongside their congratulations. Among those urging the pop star to get a prenuptial agreement is actor Octavia Spencer, who commented "Make him sign a prenup" on the Instagram post. Asghari replied in apparent agreement with the 100 emoji.

"Thank you everyone who is concerned about The [sic] prenup!" Spears' fiancé added in an Instagram story this morning. "Of course we're getting iron clad [sic] prenup to protect my jeep and shoe collection incase [sic] she dumps me one day 😂😂." 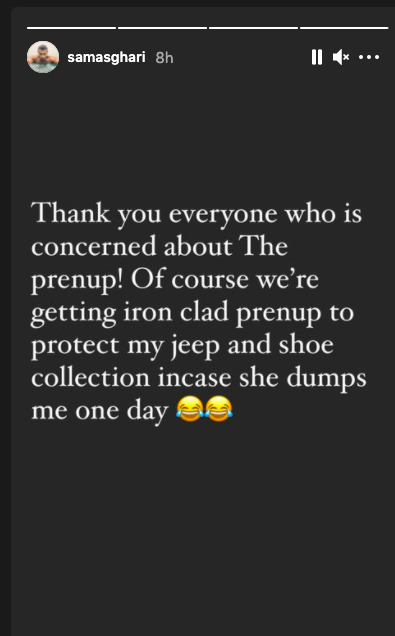 Spears was previously married twice — to longtime friend Jason Allen Alexander in 2004 and dancer Kevin Federline later that same year, with whom she had two sons.


Last week, Lorde was clairvoyant about Spears' forthcoming ice, mashing up the pop princess' song "Break the Ice" with her own "Fallen Fruit."