Axl Rose Is Trying to Remove "Fat" Photos from the Internet

By Gregory Adams
Published Jun 06, 2016
Axl Rose is having a productive year, what with the vocalist taking part in Guns N' Roses' big reunion tour and becoming the frontman for AC/DC. He's also been quite busy offstage, as he's currently waging a crusade to have some old, unflattering concert pics — and a wave of weight-targeting memes they inspired — pulled from the Internet.

As pointed out by TorrentFreak, the famous singer has demanded Google remove a series of live photos posted online. Taken by Boris Minkevich for the Winnipeg Free Press, the pics were originally uploaded as part of a 2010 concert review, but have since been manipulated by meme makers to make fun of Rose's weight. Satirical slogans used with the pics include "Welcome to the Bakery" and "Sweet Pie O Mine."

A Digital Millennium Copyright Act notice was sent to Google on May 31 by Web Sheriff, on behalf of Rose. The complaint notes that "no permission has been granted to publish the copyright image," further explaining that Rose owns the copyright, even if Minkevich took the photos in question.

We can gladly confirm that all official / accredited photographers at [Axl Rose] shows sign-off on 'Photography Permission' contracts / 'Photographic Release' agreements which A. specify and limit the manner in which the photos can be exploited and B. transfer copyright ownership in such photos to AR's relevant service company.

As of press time, Google has not followed through with the removal of the memes, some of which you can check out below. 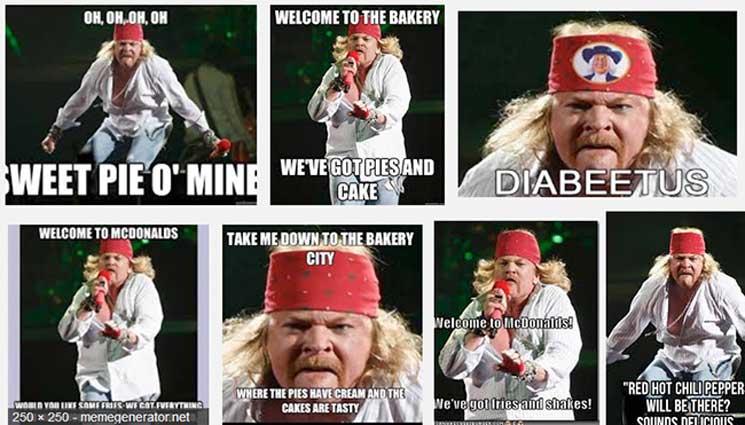