From 'Mission: Impossible – Fallout' and 'Black Panther' to 'BlackKklansman' and 'Sorry to Bother You,' it was an eclectic year for movies

By Exclaim! Staff
Published Dec 17, 2018
In a year full of high highs and low lows, it only makes sense that our year-end list would be packed with films full of twee bears, sing-along musicals, children's television hosts and nightmare-inducing horror involving demon babies and anti-capitalist horse people. Doesn't that just feel like real life? Here are Exclaim!'s 12 best films of 2018.

Director Ol Parker gave fans of the glittering 2008 musical a sequel/prequel wish-fulfillment this year, with all the corny fun of the original and a dollop more splashy spectacle. The film showcases flashbacks to Donna's romps with the three possible DNA matches, as well as meddling daughter Sophie's (Amanda Seyfried) present-day efforts to cement her mother's legacy. The ABBA beats and sunny vibes of Lily James as young Donna successfully distract from Meryl Streep's absence and both old and new cast members (Cher) throw themselves into the profoundly uncool project with giddy abandon.
Joy Watson

"Death-defying" is the phrase that comes to mind most when considering Christopher McQuarrie's Mission: Impossible – Fallout. For one thing, you'd expect to find the franchise on its last legs — or at least slowing down — by this sixth installment, but instead it somehow appears to be just hitting its stride. Similarly, you wouldn't think a Tom Cruise in his mid-50s would still be performing ludicrous stunts, yet here he is in one exhilarating scene (or shot, even) delivering the crowning achievement in a prolific career spent sprinting to and from danger on film. Finally, there's the way the film seems to jump from one jaw-dropping set piece to another, relegating the twisty plot to revolve around the machinations of your standard McGuffin, and fully embracing the pure spectacle of the summer action movie. More, please.
Kevin Scott 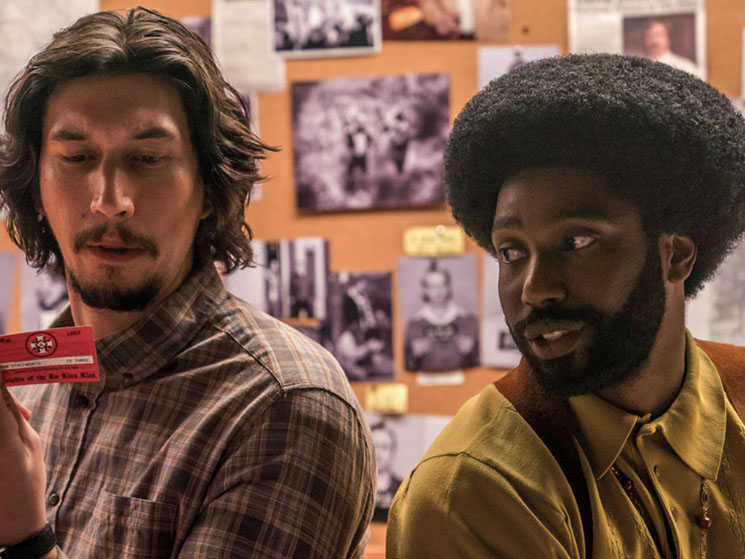 In a more innocent time, BlackKklansman might have been a wickedly goofy comedy about 1970s racism — a bit like the way O Brother, Where Art Thou? ridiculed the KKK. But thanks to the rise of white nationalism in Trump's America, the film is sadly a reflection of the current political moment. Spike Lee is tender towards his loveable leads and absolutely scathing towards neo-Nazis, making for a film that's warm-hearted while simultaneously offering a grave warning about recent rise of mainstream racism.
Alex Hudson Though it could have been a crass, self-aware reboot that no one asked for (*cough*Peter Rabbit*cough*), 2014's Paddington ended up being a delightful little kids movie about an adorably cuddly bear. Yet director Paul King (The Mighty Boosh) has done the expected yet again — his sequel is a film that's so meticulously perfect and detail-oriented, it makes the first Paddington look like a steaming pile of marmalade-filled bear shit. Paddington 2 is packed with sight gags, romance, adventure, comedy and so much delightful Hugh Grant. It's the most twee family movie of all time, whether you watch it with family or not.
Josiah Hughes

Decades in the biz and credits that include penning Taxi Driver and Raging Bull, 72-year-old Paul Schrader channeled an entire life's work into First Reformed. The result is a film that will stand as his quintessential piece. Starring Ethan Hawke as a reverend going through a crisis of faith, the film is a meditative and beautifully rendered work that demonstrates the toll that personal conviction can have on one's psyche. Supported by in-depth performances from Amanda Seyfried and Cedric the Entertainer, First Reformed is a film that will be remembered for years to come.
Josiah Hughes


7. Won't You Be My Neighbor?
(Directed by Morgan Neville)

This world needs Fred Rogers more than ever right now. Morgan Neville's elegiac documentary Won't You Be My Neighbor? is a fond remembrance of a kinder and gentler time, when someone like Mr. Rogers was able to entertain children on PBS with no more than a soft voice, common decency and perhaps a sweet song or two. Tracing his career trajectory from an awkward presence making children's programming in an unorthodox manner to a cultural mainstay who taught generations of kids how to deal with complex issues like death and depression, this is a film that will make you lament the decay of children's programming and weep for the decline of earnestness and sincerity in these increasingly cynical times.
Kevin Scott The last few years have given rise to the term "elevated horror," a handle used to describe horror films that tackle heavy subjects usually addressed in serious dramas. Despite its buzzy nature, there's no better way to describe Hereditary, which truly elevates the genre by cranking every single moment up to 11. Hereditary is so visceral, and such a harrowing, upsetting dive into the depths of grief in all its raw, ugly glory, that it alienated mainstream audiences unused to exploring human tragedy in horror, prompting derisive audience feedback and major awards snubs despite universal critical acclaim. Toni Collette puts in a shattering, devastating performance as the matriarch of a family faced by a slow burn of escalating terror, both real and paranormal, that it makes Hereditary's exclusion from awards season all the more unfair.
Laura Di Girolamo

In a world where retro '80s pop culture is being bled dry for easy references, Panos Cosmatos went back to 1983 and lit the whole damn year on fire. Mandy is certainly full of familiar-feeling childhood tropes — it's hard to believe Cheddar Goblin wasn't already a real character — but it's also so much more. Starring a tooth-clenching Nicolas Cage, the film is a brutally violent, beautifully terrifying revenge movie that earns every single one of its fist-pump-inducing moments (they happen every five minutes or so). Factor in a bone-rattling metal-meets-neoclassical soundtrack from the late Jóhann Jóhannsson (his final work), and Mandy is a midnight genre classic that transcends all genre.
Josiah Hughes As cool, slick, and revolutionary as the title announces, Black Panther throws down a gauntlet of world-building and symbolism that showed audiences exactly what was missing from the lily-white Marvel film canon. Set in the African utopia of Wakanda, the royal family, led by T'Challa, must prevent their land from becoming vulnerable after Killmonger (Michael B. Jordan) makes a bid for the throne. Director/co-writer Ryan Coogler and his flawless cast full of MVPs — Danai Gurira as royal guard Okoye and Winston Duke as M'Baku are electrifying — transition from warriors and visionaries to shit-talking their friends with ease. In establishing this new film franchise, Black Panther leaves everything on the field.
Joy Watson

With just a few characters and minimal dialogue, actor/director/cowriter John Krasinski gave audiences an experience like nothing else in 2018. A Quiet Place is a white-knuckle thrill-ride, all resting on the extremely simple premise that the world has been taken over by blind monsters who hunt by hearing. Screenings were so quiet you could hear a pin drop — which was extremely tense, not to mention embarrassing for anyone munching on popcorn. We'll never see Krasinski as just "Jim from The Office" ever again.
Alex Hudson 2. Sorry to Bother You
(Directed by Boots Riley)

Every year a film comes out of left field that ignites part of the public's consciousness. And in a post-Get Out world, it's easy to see similarities between Jordan Peele's unpredictable smash and Boots Riley's directorial debut, Sorry to Bother You — the story of an Oakland-based slacker (Lakeith Stanfield) who adopts a white voice to climb the corporate ladder at a telemarketing agency, only to uncover shocking truths along the way — in terms of their cultural importance and unequivocal blackness.

But where Peele's breakout used violent horror to disseminate its pungent societal critiques, Sorry to Bother You's chilling messages — about capitalism, assimilation, and homogenization — seep in slowly over its nearly two-hour runtime in the form of surreal scenes that only grow more absurd and thought-provoking as time goes on. Many critics have compared Sorry to Bother You, at least stylistically, to the work of Michel Gondry, what with its handmade quality and all-around inventiveness (there's even a not-so-subtle reference to the French director near the film's end). But Riley's first feature-length film ultimately defies comparison, leaving you questioning everything you know about art and society in ways you never imagined, as all classic movies should.
Matthew Ritchie

Despite what John Hughes-worshipping cinephiles might say, filmmakers often get adolescence wrong. It's not something that's accomplished and forgotten about in one life-defining, party-hearty night, but a grueling war of attrition characterized by anxiety-ridden moments that often feel way worse than they truly are (and sometimes even worse than expected). Technology isn't helping matters. But one of the benefits of social media is its ability to give a voice to the deeply particular, highlighting specific parts of society that might not have fostered connection otherwise.

YouTube star-turned-somewhat-standup sensation Bo Burnham's feature-length directorial debut, Eighth Grade, operates in a similar way. It tells the story of Kayla (played with pristine awkwardness by rising star Elsie Fisher) as she navigates her final week of middle school. Thanks to a gut-rumbling score by Anna Meredith, even the most exciting moments in a pre-teen's life — from a pool party to a crush's classroom cameo — are rendered with terrifying tension and fraught with fear. But it's in the film's quieter moments — the uncomfortable fondling of a future creep-in-training; Kayla staring at a smartphone screen (as she does most sleepless nights), waiting for a like, comment, or any kind of response to roll in — that Burnham (and Fisher) really shine, making the microcosms that exist in our most unbearable moments seem monolithic.

In 2016, Burnham stopped doing standup due to debilitating panic attacks, and in numerous interviews he's stated that anxiety and trepidation informed a large part of this movie's plot and feel. But what separates Eighth Grade from similarly minded films about identity and apprehension isn't its broad appeal, but minute focus. Eighth Grade gets so many things right, and in such honest ways, that every other movie-going experience in 2018 felt wrong in comparison.
Matthew Ritchie