By Josiah Hughes
Published Jan 31, 2018
The fantastic Paddington 2 is rightfully the best reviewed movie ever posted on Rotten Tomatoes, and the first movie in the series is almost as good. As such, showing the movie to a classroom full of nine-year-olds is a no-brainer — but that doesn't mean teachers should stop paying attention.

As the Irish Sun reports, parents were pissed at the staff of the Croft Academy in Walsall, England, when they accidentally showed their students pornography during a screening of Paddington.

A parent who chose to remain anonymous told the Sun that the pornographic images popped up in the middle of the movie. Apparently, the teacher had been streaming Paddington from the web.

Rather than inform the parents of what had happened or apologize for the flub, the school sent home a letter with their students.

"I was absolutely disgusted to hear it from my child's mouth, to know he has been shown this," the anonymous parent said. "You do not expect to have it in a school; you try your best to prevent it at home. Some children take it with a pinch of salt but other kids are traumatized."

The parent continued, "We were all disgusted considering the children had to tell us. Parents are annoyed that we were made aware by giving a letter to the Year Five students, who can read, so it is not only wrong to see it but they have to repeat it. We asked a member of staff if they had even watched the film beforehand and they had not."

Read the letter from the school below. 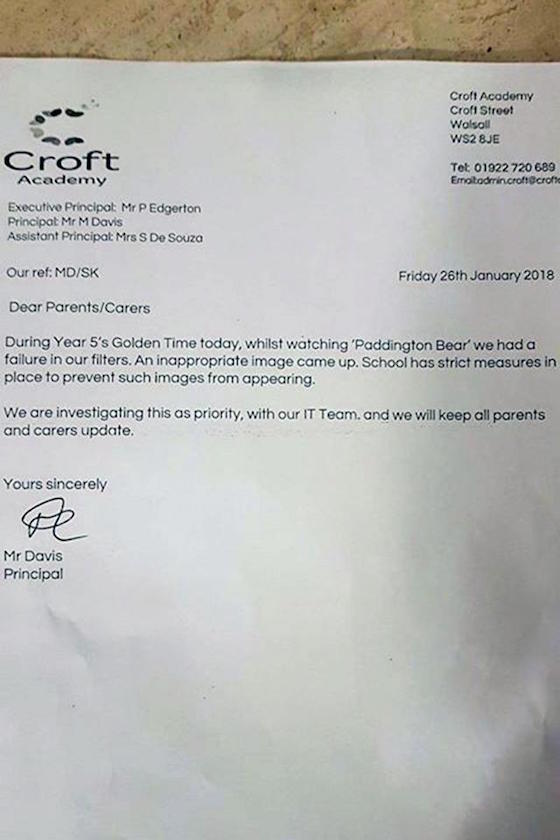