The Japanese music hero is currently recovering in hospital

Via a written note on his website, the Japanese artist — who rose to fame playing alongside Ryuichi Sakamoto and Haruomi Hosono in YMO — made the reveal to fans earlier today, explaining that he had surgery on August 13. Currently, Takahashi is still in hospital recovering. However, he called the operation a success, stating, "The progress is going well."

Apparently, Takahashi had been suffering from intermittent headaches since early this summer. While the musician initially thought these were due to migraines onset by the changing seasons, he eventually had an MRI when his symptoms failed to improve, revealing the headaches were the result of a brain tumour.

Describing the moment when he learned of his diagnoses, Takahashi stated it was "a long day when he could not catch reality and was unable to speak in despair."

With Takahashi now labelling the operation a success, the artist said he's found a new peace of mind and will now concentrate of his treatment. In his message, he also took time to thank the medical staff overseeing his treatment.

"I want to try to stand before you as soon as possible," Takahashi said in his message to fans.

You can read Takahashi's untranslated message below.

While Takahashi will now be taking some time off, he just recently released the new single "Environmental" with the supergroup METAFIVE, which also consists of Towa Tei, Keigo Oyamada (a.k.a. Cornelius), Yoshinori Sunahara, Tomohiko Gondo and Leo Imai. You can hear "Environmental" below, where you can also watch the song's video.

Last year, Takahashi's solo debut Saravah! was celebrated in North America with a vinyl reissue on We Want Sounds. 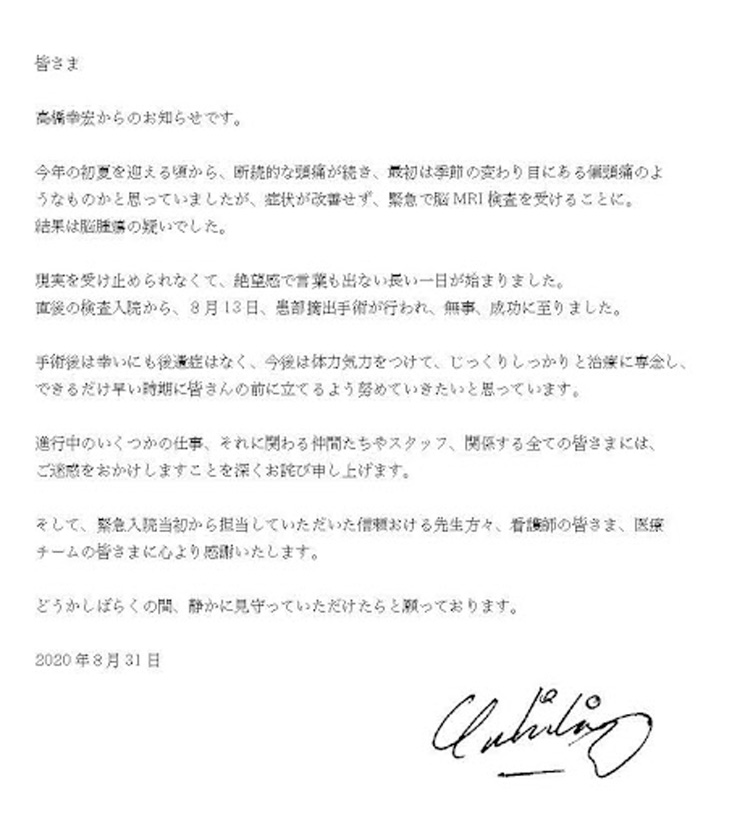