By Kerry Doole
Published Mar 05, 2015
Tom Wilson has long been a passionate advocate for Hamilton and its music scene. As leader of the Florida Razors, then '90s Canadian rock favourites Junkhouse and now Lee Harvey Osmond and one-third of roots rock supergroup Blackie and the Rodeo Kings, Wilson has been one of that scene's most prominent and successful citizens over the past three decades.

His passion is now being represented in a very tangible form. Aside from being a prolific musician, Wilson has long had a parallel career as a visual artist. Both these sides will be showcased as Juno Week comes to his beloved home town from March 9 to 15 before the Juno Awards are officially announced March 15. Juno organizers CARAS and the City of Hamilton music office joined forces to commission Wilson to paint a mural that tells the story of the unique but oft under-valued Hamilton music scene.

The result is The Mystic Highway, a vivid 40 ft x 40 ft mural that pays tribute to the Hammer's rich musical past and present. This will be installed in James Street North in downtown Hamilton this coming week, coinciding with Juno Week. Hamilton musicians to be featured in the mural include folk great Jackie Washington, guitarist Brian Griffith (who passed away in November), Frankie Venom and Teenage Head, King Biscuit Boy, Forgotten Rebels, Harlan Pepper (the young band whose lineup includes Wilson's son Thompson), Monster Truck, the Arkells, and, naturally, Junkhouse.

As Wilson explained, the artist did not have to be talked into this gig.

"When I was asked to do the mural, the dime didn't even hit the floor. I knew it was something I had to do," he said in a statement. "It's time to recognize our musical heritage. It's important to acknowledge because there is a depth to the cultural life in this city that nobody has paid attention to. Most people don't know that Hamilton is the birth place of ambient music, through Daniel and Bob Lanois. Or that Conway Twitty wrote 'It's Only Make Believe' in Hamilton. When artists come to collect their awards, they're not stepping into an empty shell of a city or an arena. They're standing in the home of great music."

To Wilson, Hamilton always has been the oft-maligned underdog.

"Toronto has its own thing. Being next to a monster producing art and commerce, sometimes a city like Hamilton gets swallowed up. Like Oshawa or Barrie, it's all the same to people. But Hamilton is a city of individuals. Hamilton is able to live and breath on its own. If no one paid any attention to it, it still would continue to breed great music. Our limitations are our greatest asset. We've always had to work a little bit harder to get attention. It's the energy of slaves and the spirit of underdogs. Music is still coming out of here that is made by individuals. It's not made for any cool factor or to to please a crowd or critics. The art of communications gets down to the ground level in Hamilton."

The mural's title, The Mystic Highway, is Wilson's term for Highway 6, a route he believes has possessed rich musical mojo.

"In Hamilton, we've looked to Buffalo and we've looked down the Mystic Highway for inspiration," he explained. "Highway 6 runs from Hamilton through Port Dover, to Turkey Point. It's where Robbie Robertson spent summers on the Six Nations. It's where Ronnie Hawkins fired his drunk bass player and hired a young Rick Danko. It's where Canadian rock and roll got to party at Summer Gardens in Port Dover with 12-inch hotdogs and Speedo bathing suits. It's where migrant workers from the islands meet Six Nations and Mohawks and tobacco fields and tourists come together and developed their own kind of gumbo."

Wilson's thoughts on this topic crystallized after he was interviewed by the BBC in London. "They said I have a southern sound," he recalled. "I started to think about the mystic highway: this artery out of it that breathes and bleeds a style of music and a way of performing like nowhere on the planet."

In addition to seeing his mural unveiled, Wilson will also participate musically in Juno activities, with Blackie and the Rodeo Kings (winners of a Juno in 2000 for Best Roots and Traditional Album with Kings of Love) performing as part of the Blame It on Hamilton showcase on March 13 at the Hamilton Public Library.

Next up for Wilson will be the release of the third Lee Harvey Osmond album Beautiful Scars, out on Latent Recordings on April 7.

UPDATE: You can now get a better glimpse of the mural down below. 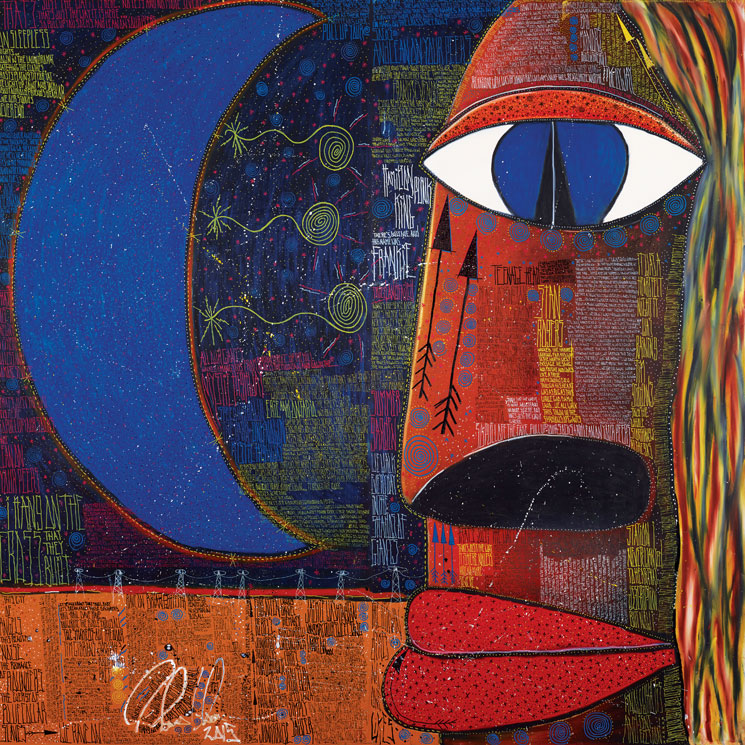