By Matt Bobkin and Allie Gregory
Published Jun 29, 2022
There are only so many music festival formats, but Sled Island's approach stands out: in addition to packing Downtown Calgary's venues and public spaces with showcases that mix high-profile artists and developing talent from Alberta, across Canada and throughout the rest of the world, the festival chooses one headliner to serve as a guest curator, hand-picking artists that might not have come to Western Canada otherwise. The result is a festival that varies wildly from year to year — where, beyond a commitment to showcasing the best independent music, anything can happen.

Running from June 22 to 26, the first Sled in three years featured guest curation by L.A.-based violinist-vocalist Sudan Archives, whose adventurous blend of R&B, electro, hip-hop and folk made her and the litany of similar-minded artists she brought with ideal ambassadors. As one of the first major Canadian festivals to feature international artists since the pandemic began in 2020, the mingling between renowned headliners and emergent openers bolstered the festival's community spirit, like when Low took to Twitter to shout out Montreal's Yoo Doo Right.

The artists of Sled Island 2022 covered vast ground with regard to genre, stature and geography, but all conjured nothing short of sheer devotion from every single crowd. The audiences were uniformly intense and eager — people in cloaks, collars and corpse paint moshed at the heavier shows, while those in brightly patterned button-ups sat attentively in the pews of the Central United Church (a vibe so relaxed, one attendee calmly knit their way through Nick Schofield's ambient soundscapes). Many of the festival's staple events returned this year — film screenings, comedy showcases, visual art exhibitions, conference panels, the outdoor block party and fest-ending pig roast and karaoke — but we focused on the artists who gave this year's edition its unique flavour. Here are the performances that stood out the most. 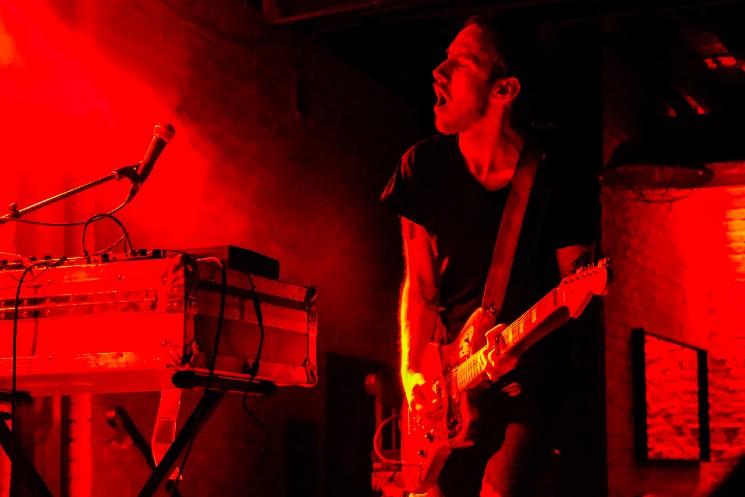 Leave it to Montreal post-rockers Yoo Doo Right to turn just a handful of songs into a 45-minute set. Incorporating cuts from this year's A Murmur, Boundless to the East into their toasty main stage performance at the Legion (opening with the excellent "Say Less, Do More"), the set was punctuated by album closer "Feet Together, Face Up, on the Front Lawn," with its pulsating, jammy back-half taking up most of of the show. The band's rhythmic synchronicity was on full display on Wednesday night (a precursor to Low's headlining slot), as the three-piece exchanged driving bass notes, devastating drums and fuzzed-out guitar and synths, demonstrating their near-telepathic connectivity, as well as the pleasure they so clearly derive from their craft.
Allie Gregory 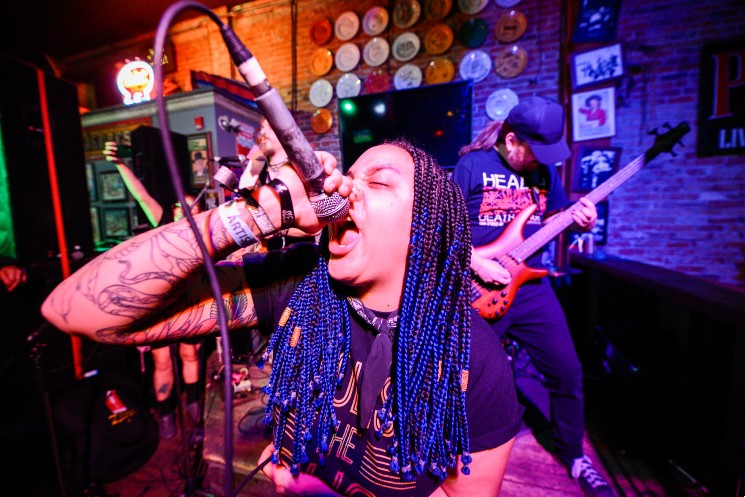 With nods from Exclaim!, the Polaris Music Prize, Elle and the CBC, Vagina Witchcraft have been anointed the new faces of Western Canadian heavy music, and the Winnipeg doom metal quartet proved they had earned the mantle at Broken City on opening night. Stoner rock riffs set the stage for Kayla Fernandes's powerful growls as they took to the floor to share their messages of fury and retribution, elevating the live-off-the-floor energy from 2020's self-titled debut album with the addition of an enraptured and enraged crowd. When Backxwash arrived to see what was up, decked out in full wig, gown and corpse paint in advance of her own show later that night, she blended right in.
Matt Bobkin 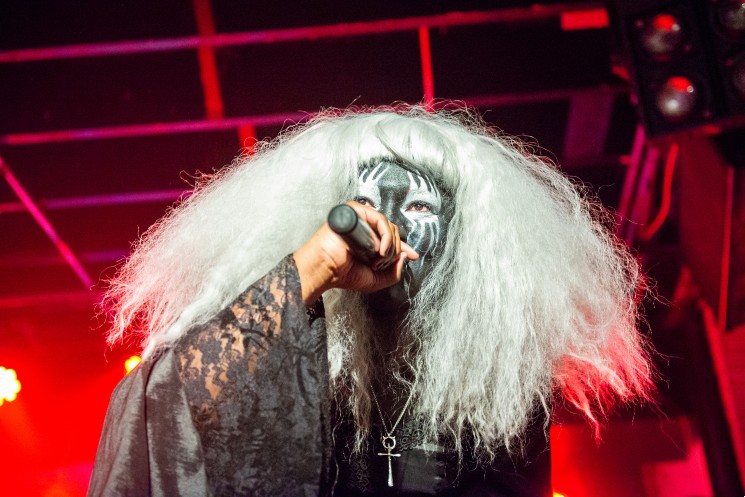 After a delightful warm-up from L.A. producer (and Sudan Archives pick) Teebs, Backxwash got the crowd at Commonwealth hyped with a projection screen pre-show, later making her entrance onstage donning her signature corpse paint, a white wig and a long black gown — fittingly demonic attire for an artist who so boldly blends industrial, horrorcore and hip-hop. Her visual components played an equal role in every part of the performance, continuing throughout show highlights "Black Magic," "Spells," "I Lie Here Buried with My Rings and My Dresses" (with video accompaniment featuring guest vocalist Ada Rook of Black Dresses) and "Devil in a Moshpit," the last of which found Backxwash moshing alongside festivalgoers in the pit, quaking the venue floor and making for an all-around sweaty affair.
Allie Gregory 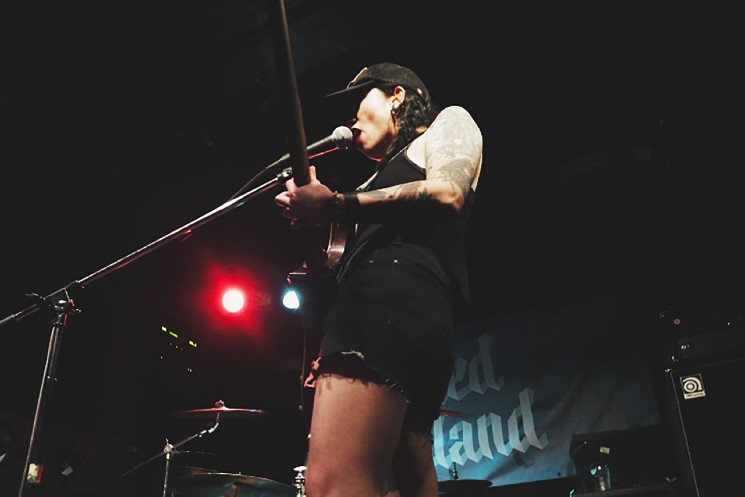 For their first show in eight years, doom metal duo Mares of Thrace were not hailed as the hometown heroes they are — most of the Broken City crowd had left to check out Backxwash, in the first of several unfortunate schedule conflicts. But the two-dozen or so who stayed made sure to lavish plenty of praise on Thérèse Lanz (who had just moved back to Calgary after a decade away) and Casey Rogers (new to the Mares, but a veteran of the city's metal scene), who roared out of the gate from the opening moments of "Mortal Quarry." Upon the release of comeback album The Exile earlier this year, we declared the Mares to be "nerdier (and heavier) than ever," and they followed through on both claims: Lanz delivered dextrous riffs and high kicks while wearing a TNG hat, while Rogers commanded the kit decked out in a DOOM shirt. What the crowd lacked in numbers they made up for in sheer headbanging enthusiasm led by Vagina Witchcraft, who delivered "we're not worthy" bows and growls of devotion. (During the post-show afterglow, Fernandes gleefully announced that the band were crashing with Lanz.) Word will surely spread and the Mares will be rocking out with appropriately sized audiences before long.
Matt Bobkin 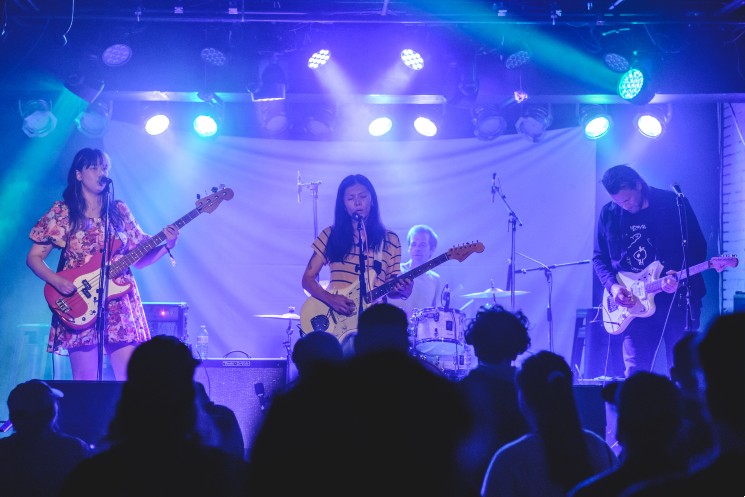 Despite feedback issues, Vancouver's Kamikaze Nurse delivered one of the most impactful sets on Thursday night at the Palomino Smokehouse's main stage. Bookended by Hermitess and Vagina Witchcraft, the four-piece offered an intriguing segue between the former's dreamy synth folk and the latter's doom metal, delivering '90s swagger and ooh-woos on cuts from 2022 sophomore album Stimuloso, including "Never Better" and a haunting rendition of "Aileen."
Allie Gregory 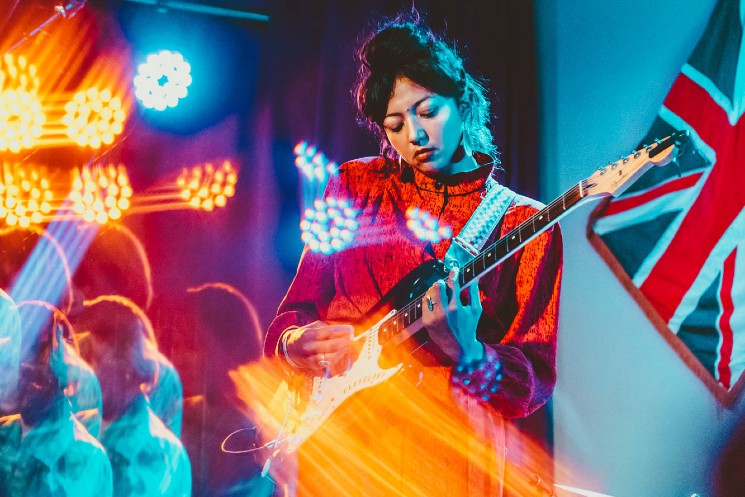 Venues were at full capacity and masks were few and far between, but anyone in need of a reminder that we are still in the middle of a pandemic needn't look any further than La Luz's Sled performance. The L.A.-based surf rock quartet were down a bassist after Lena Simon tested positive for COVID, but Edmonton's Jenni Roberts (Faith Healer, Tee-Tahs) filled in perfectly in what can only be described as an act of Sled Island magic. Their set was teeming with supernatural forces: every time the band copped to a slip-up, they swore they were haunted by Simon's spirit. (Thankfully, she is very much alive.) Despite playing in the very indoor confines of the Legion, the band's playful onstage energy — complete with endearing banter and plenty of laughs and glances — and blend of surf, psych and doo-wop conjured a beach party, which was heightened when the band got the already packed crowd to carve out a centre aisle for a Soul Train-style dance line. An eager and talented attendee quickly took up the band's offer of an unspecified present to the first person to do the worm down the aisle; I hope the prize (and the crowd's instant roar of approval) was worth making direct contact with 100 years of footprints and spilled drinks.
Matt Bobkin 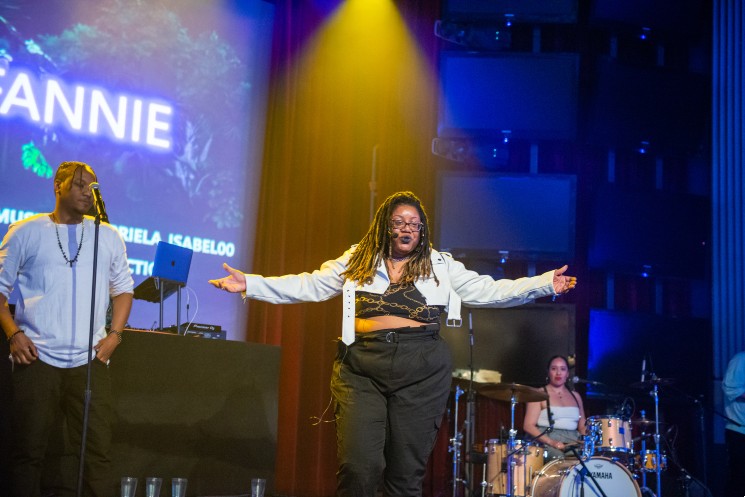 Being the local opener for an artist like Princess Nokia in a space like the Palace Theatre is a big honour, and the way Tea Fannie ran with it says so much about her values: she chose to share the spotlight with as many of her scene-mates as possible, going as far as putting everyone's Instagram handles on her projected backdrop before the show even started. Sure, it ruined any special guest surprises, but it more importantly highlighted her commitment to community and camaraderie. Fannie threw it back to the golden age of hip-hop with lighthearted, memorable hooks and an onstage party with her crew, anchored by hype man K-Riz, DJ Catfish the Wizard and drummer Gabriela-Isabel. Between performances of infectious tracks like "Gimme Dat," "I Was Mad" and "YWICM," Fannie let her collaborators take the spotlight: K-Riz dazzled with his warp-speed, a cappella finale on "Sibling Rivalry," while Samantha Savage Smith put her powerful pipes to good use on the hook of a new track. What good is making it big if your friends aren't there with you?
Matt Bobkin 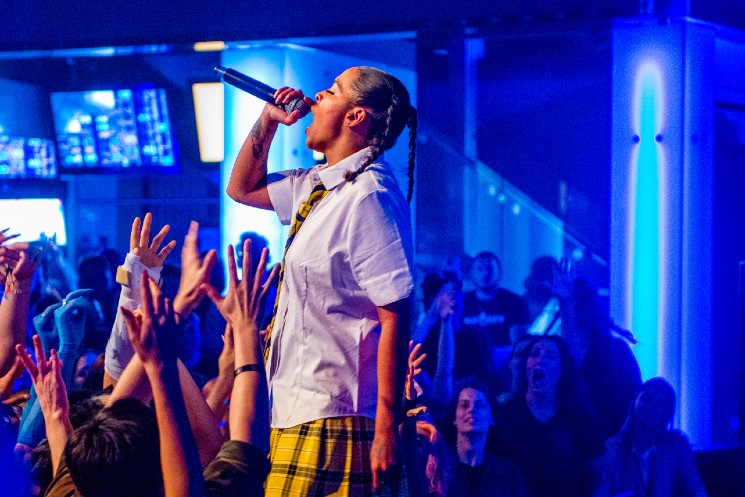 Princess Nokia's headlining set at the Palace Theatre felt vital from the jump — an extended intro mix by her DJ featured a tune by Ottawa electronic duo the Halluci Nation, who were given a lengthy shoutout later on, and opening number "Sugar Honey Iced Tea (S.H.I.T.)" elicited a crowd reaction so rapturous, it left the NYC rapper in tears. As Nokia and their backup dancers moved their way through everything from newer bangers "Slumber Party" and "No Effort" to breakthrough classics "Tomboy" and "Kitana," the set carried a sense of urgency. Nokia went on stage hours after the US Supreme Court overturned Roe v. Wade, and it weighed heavily on their mind: they shouted "Happy Pride… and fuck the Supreme Court!" and dropped a "My body, my choice" during "Tomboy," and then took the energy down near the end of her set, sombrely singing lullaby-like deep cut "Apple Pie" a cappella to drive home the seriousness of what was happening. But Nokia wasn't going to send the audience on their way on a glum note, playing them out to Beyoncé's "BREAK MY SOUL" as they and their dancers waved their flags to wrap things up. After a performance filled with humanity and humility, Princess Nokia also showed themself to be tenacious and resilient, an inspiration to a crowd grappling with an unsafe and oppressive world.
Matt Bobkin 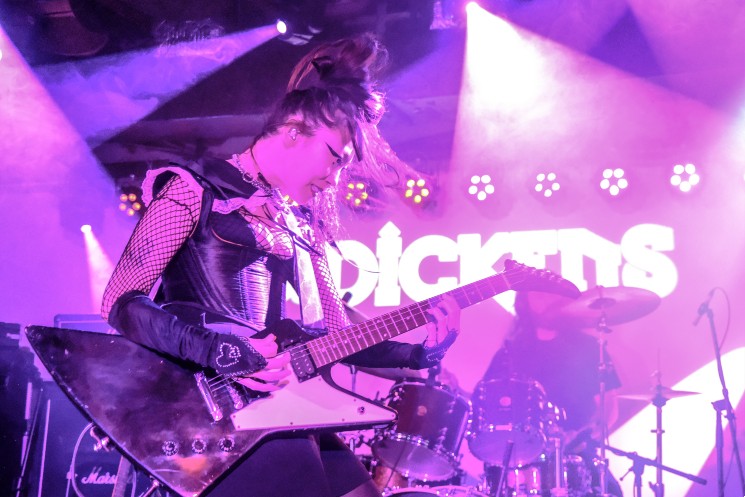 Thrashing out of the gate this year with sophomore album Squeeze — following the shoegaze of her 2019 self-titled debut and time with garage rockers Cherry Glazerr — SASAMI's Sled Island appearance at Dickens was equally fierce; she rocked fishnets, a leather bodice and thick, black eye makeup while her band donned black capes, fully embodying her nu-metal and industrial-leaning era. The formerly timid musician commanded her stage with manic intensity, screaming, jumping around and menacing her bandmates (who seemed to be enjoying the playful aggression). Playing through her recent catalogue — including "Call Me Home" (a "very queer" song about "blowing your life up just to feel anything at all," performed in celebration of Pride Month), plus a well-received cover of System of a Down's "Toxicity" — Ashworth made her presence known during an abbreviated but explosive basement set.
Allie Gregory 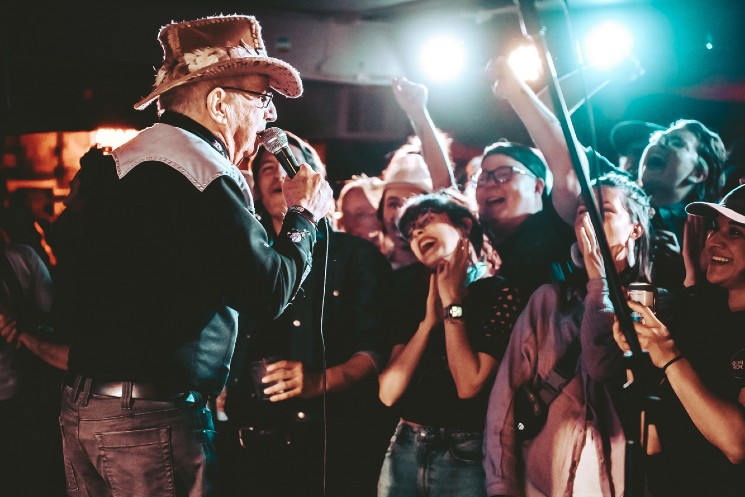 Chronicling his storied 78 years on Earth as a gay man, Patrick Haggerty, self-proclaimed "screaming Marxist bitch" and leader of Lavender Country, peppered his late-night set with tales of being the first-ever person to get kicked out of the Peace Corps for "sucking dick," spending time in a mental health facility after being outed, falling in with revolutionaries in the '60s, travelling to Fidel Casto's Cuba to cut sugarcane and form a gay caucus, and all that he learned about class conflict and Marxism in the decades between. The other half of his set was dedicated to singing delightful vulgarities about sex, love, activism and all that is contained within this year's sophomore album Blackberry Rose and 1973's landmark self-titled debut. "Gay Bar Blues," "Come Out Singing," "Cryin' These Cocksucking Tears" and "I Can't Shake the Stranger Out of You" were standouts amid the intimate midnight basement performance, with its packed audience populated by a menagerie of queer folk, freaks and curious festivalgoers seeking something legendary, all of whom Haggerty was not shy about shushing when things got too rowdy.
Allie Gregory