Mark Hoppus Is Auctioning Off His Blink-182 Gear

By Josiah Hughes
Published Jul 02, 2019
Considering the number of decades Mark Hoppus has been in the game, it should come as no surprise that the Blink-182 member has amassed a lot of gear over the years. As such, he's just announced plans to sell off some key items on Reverb.

As Hoppus previously announced on Twitter, he is auctioning off a plaid-printed bass, with plans to donate the proceeds (and match the sale with an additional $5,000) to the Trevor Project, an organization that focuses on crisis intervention among LGBTQ youth.

"We call this plaid bass Groundskeeper Willie. I wrote a great deal of the bass riffs for the [2003] untitled album on this bass. It has the sticker of the unicorn on there and the pink Famous Stars and Straps keychain that has been on here for the past decade and a half," Hoppus said in a statement. "I'm auctioning it off to raise money for the Trevor Project, which is a great organization doing great work." 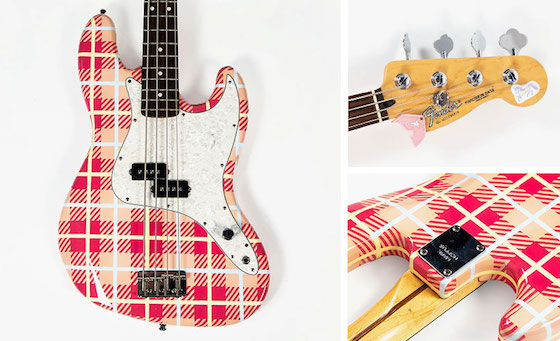 The bass auction, which can be viewed here, will end on July 8. From there, Mark will launch a store with a number of other items.

• A Fender Precision Bass used on tour that features a custom octopus drawing by Craig Christy of Ray Gun Tattoo.

• A custom-painted Blue Microphones tube condenser mic that Hoppus said has "been a staple of my studio setup ever since Jerry Finn told me to buy [it] on Enema of the State."

• A pair of Avalon U5 DI boxes and preamps used extensively by Hoppus. "These were the direct pre- and post-amp sound of my live show since 2001. These have been around the world several times," he said.

• An Ampeg SVT Classic amp that sat in Hoppus' live setup for nearly a decade. "This amp has literally been around the world. It has been everywhere, sounds great, and is well road-worn," Hoppus said.

• A dozen API 512C preamps from Hoppus' home studio. According to Hoppus, the preamps travelled to the U.K. with him and were used to record the PAWS album No Grace.

Watch Mark describe the gear he has for sale below.