​Exclaim! 25th Anniversary Our History with (All the Members of) the New Pornographers

By James Keast
Published Apr 17, 2017
Continuing our look back at the past 25 years of Exclaim!, here's a brief history of how the magazine and the members of the New Pornographers have intertwined over the years. Pick up a copy or stream their new album Whiteout Conditions (out now on Dine Alone Records) here. 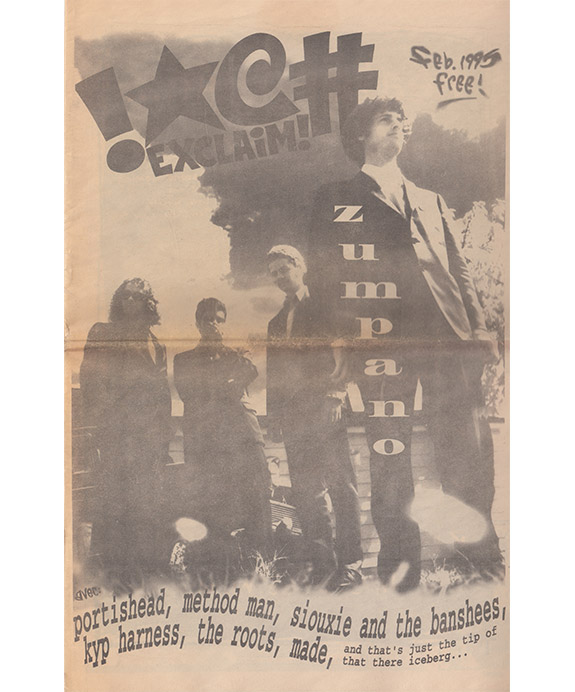 Carl Newman's synthy pop group Zumpano are featured on the cover for their Sub Pop debut, Look What the Rookie Did. The signing is a significant departure for the then-grunge-oriented label — "We sound a lot more like Billy Joel than MC5," guitarist/keyboardist Michael Ledwidge says in the story.

For context, the feature mentions Zumpano fitting in to the "cocktail generation" (there was a brief, sorta unfortunate "lounge" revival in the mid-'90s), but it's revealing of Newman's vision at the time. "All the records I truly love are slick-sounding records," he says. "Just because Nirvana happened doesn't mean you have to give up on tone." 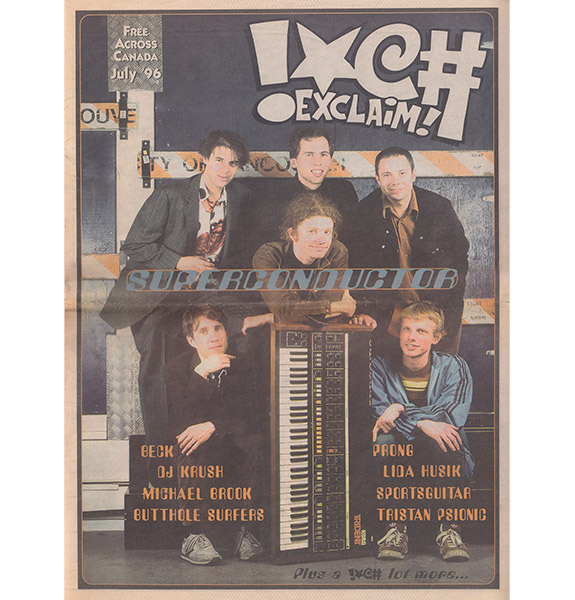 Absurd Vancouver guitar orchestra Superconductor are on the cover for their full-length Bastardsong. The prog rock-oriented band would feature between 10 and 19 guitarists, depending on the show, and in addition to Newman, the band features Scratch Records founder Keith Parry, as well as Scott Gubbels, who runs a Vancouver label called Tinker. The label had recently released the solo debut of local songwriter Dan Bejar, as Destroyer, called We'll Build Them a Golden Bridge. 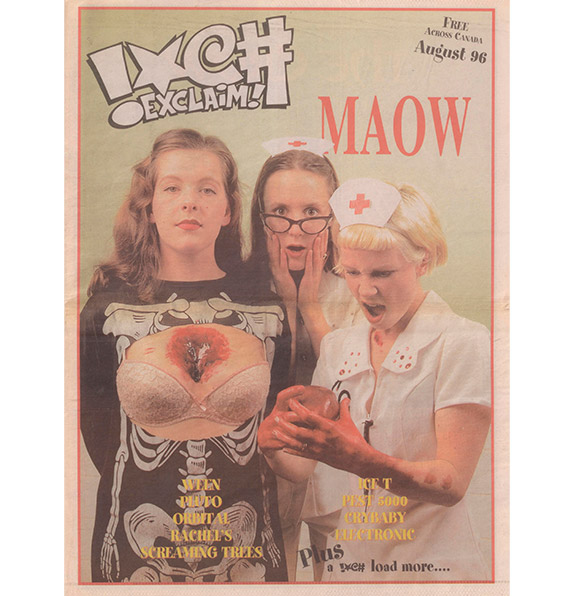 Maow, featuring drummer Neko Case, is one of the most striking covers in Exclaim! history. The story of these rockabilly punks, who'd recently changed their name from Meow, was written by Scott Ingram — aka Scott Pilgrim, as nicknamed by Plumtree and made famous by Bryan Lee O'Malley's comic of the same name.

The interview reveals a bit of Neko Case's musical future when the topic turns to country music. "I'd like to find those people who came up with slogans like 'All Country, No Bumpkin' and hose them down with scalding dog shit," she says. "Country is very sacred to me. Good country and rockabilly are some of the few things that make me proud to be an American." Nardwuar the Human Serviette's band the Evaporators — which features John Collins and Dave Carswell — appears on the cover. Neko Case is featured on the cover for her second solo album, Furnace Room Lullaby. Mere days before the magazine hits the street, she reaches out to say she hates the cover photo that's been provided by her record label, Bloodshot. Despite our love of Neko, it's too late to change it.

April 2000
A small feature on Dan Bejar's Destroyer project is timed around the release of his third album, Thief (on which John Collins plays bass). In the interview, he calls it a concept album about the music industry — a theme he'll later deny, saying that's too simplistic — but his attitude is revealed in the album's press notes: "Recognize that accolades can be bought, that the video is the new ad, and that while record labels scurry to dream up credibility campaigns for their indentured artists (who robotically endorse the cologne whiffs of the new capitalism soundtrack), there remains a choice."

That same issue features a review of a Mint Records compilation called The Good Jacket Presents Vancouver Special that has taken the Exclaim! office by storm, particularly one song: "Letter From An Occupant," credited to the New Pornographers and Neko (very Velvet Underground). It's a first taste that gets everyone hooked. Neko later says, of her vocal performance on the song: "Carl said 'Sing it as cold and as heartless as you possibly can. You are a robot.'" 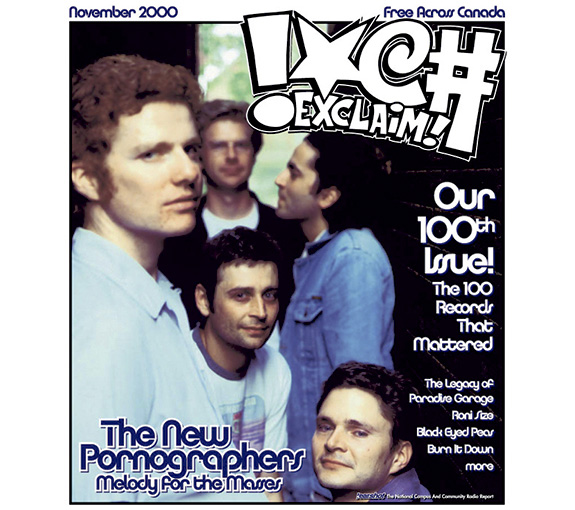 The 100th issue of Exclaim! features the New Pornographers on the cover — Neko is not present for photos. In the story, Newman is self-deprecating about their stunning debut, Mass Romantic, dismissing it as "a shitstorm" and "just spontaneous brain activity." He's a victim of his own high standards. "When I write a song, I can't help but compare it to every song I've ever loved in my life. To make a record and in the realize that it's not as good as The White Album, I think I'm ultimately kind of disappointed."

Dan Bejar is more blunt in his assessment: "It's kinda gross, how good it is."

The story mentions that Newman will be returning to a third, partially recorded Zumpano album, since that's his main gig at the time.

In the same issue, Exclaim! publishes a list of the 100 most important albums that shaped the vision of the magazine since its 1992 inception; included on the list are Destroyer's Thief, Superconductor's Bastardsong and Zumpano's Look What the Rookie Did. 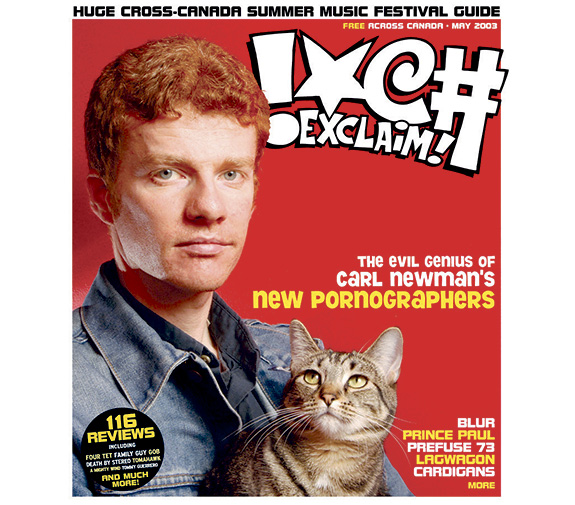 Carl appears on the cover alone for sophomore album Electric Version, with his cat. In the story, he reveals that he'd asked Sub Pop (Zumpano's label) about releasing a two-song seven-inch from the New Pornographers that would have included "Letter From An Occupant" but they refused.

One theme of the story is how the trajectory and ambitions of the Pornographers have changed since Mass Romantic was such a breakout success. "I've been involved with a lot of stuff that I thought was genius," John Collins says. "I'm surrounded by geniuses. We rule! There's no reason why people shouldn't raise us up on their shoulders. And then nothing happens at all. I've seen it happen to so many people in Vancouver. It's just weird that it worked [this time]."

September 2005
A New Pornographers magazine feature for third album Twin Cinema reveals that Immaculate Machine's Kathryn Calder (who happens to be Newman's niece) has joined the band. Bristling at the suggestion that he only plays on a handful of songs and doesn't tour, Dan Bejar does an entire fall tour with the band. 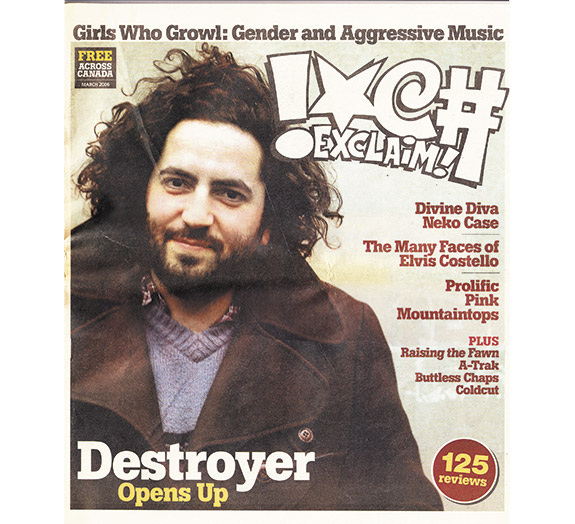 Destroyer is featured on the cover for his seventh album, Destroyer's Rubies, having refused to do many interviews — including being offered the cover of Exclaim! before — but Bejar remains a man of contradictions, in terms of both music and career.

Neko Case is featured in the same issue for her fourth album, Fox Confessor Brings the Flood.

May 2010
In an interview for their fifth album, Together, which features guests including St Vincent, the Dap Kings and Beirut's Zach Condon, Newman admits that their approach gets in the way of their commercial potential. "It gets strange when you've got four or five singers and only 12 songs. That's something that will keep us from achieving Coldplay levels of popularity, because unless you're the Beatles, I think people like there to be one singer in the band. Or maybe two is acceptable."

June 2012
JC/DC Studios is profiled in our Music School feature "Where I Play," chronicling their impact on the Vancouver scene over nearly two decades.

September 2014
The New Pornographers and various offshoots are chronicled in a career-spanning Timeline. It contains a quote from Sub Pop founder Jonathan Poneman, who told Pitchfork: "I've been a thorn in Carl Newman's side over the years because there's a third Zumpano record that is near completion, but he says he just doesn't want anything to do with it."

June 2015
Kathryn Calder's Victoria BC home studio is profiled in Music School in conjunction with her third solo album.

April 2017
The New Pornographers release their excellent new album Whiteout Conditions; it's the first to not feature any contributions from Dan Bejar.