The 11-CD set will include such albums as 'Low,' 'Heroes,' 'Lodger' and 'Scary Monsters (And Super Creeps)'

A New Career in a New Town continues the late performer's chronological musical journey, covering 1977 to 1982, and it's due out on September 29.

That's not all, though; there's a newly compiled Heroes EP, an additional 2017 Tony Visconti remix of Lodger, and a new compilation called Re:call 3 that features single versions, non-album singles and B-sides. Included on Re:call 3 tracks from the BAAL EP, as well as the Australian single version of "Breaking Glass" and an extended version of "Beauty and the Beast." The latter is currently streaming, and you can give it a listen at the bottom of the page.

The CDs included in the set are designed as "faithfully reproduced mini-vinyl versions" of the original LPs, and are gold-coloured rather than standard silver. See a photo of the reproductions below. 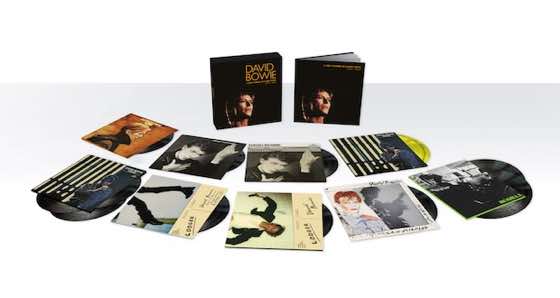 In addition to all the musical goodies, there's also a 128-page hardcover book featuring rare and previously unpublished photos by the likes of Anton Corbijn, Helmut Newton, Andrew Kent, Steve Schapiro and Duffy, plus press reviews and album notes from Visconti.


Many of Bowie's albums are available on vinyl through Umusic.