By Josiah Hughes
Published May 30, 2018
Paul Schrader is hard to pin down. He wrote the screenplays for Taxi Driver and Raging Bull and directed films as diverse as Hardcore, Mishima and The Canyons. In 1972, he published Transcendental Style in Film — a book that has become synonymous with spirituality in filmmaking. With First Reformed, however, he has tied these seemingly disparate elements together to make the best film of his career.

The film stars Ethan Hawke as Toller, a Calvinist priest going through a crisis of faith. When he's not caring for the widow Mary (Amanda Seyfried), he's brushing up against an affluent megachurch fronted by Reverend Jeffers (Cedric the Entertainer) while trying to reconcile his faith with the crumbling world around him.

We caught up with Paul Schrader in New York to discuss the many nuances of First Reformed.

People are calling this the best film you've ever directed. How does it feel to be getting such a positive reaction so far?

This doesn't happen to me. I've made films that incite controversy. So to have this kind of uniform positive reaction is sort of like seeing a unicorn emerge from a treeline. It's quite unexpected. I am kind of wondering what did I do wrong to have so many people like my film.

Did you write the film knowing you were going to direct it?

Yeah. I had written a book on spiritual cinema when I was a kid. But that wasn't me. I never thought I'd make a film like those films. And whenever anyone would try to connect my films to my book, I would say no, no, no…. Then about three years ago, I'm having a conversation with Paweł Pawlikowski, who directed Ida, and we were talking about spiritual cinema and his film and my book. And I walked uptown that night and I said, "Okay, you're going to be 70 next year. It's time to write that movie you swore you'd never write." And that's how it began. I set out to write a movie about spiritual crises.

Something I really like about this story is that it's representative of different kinds of contemporary Christian churches, both with Toller's church and the megachurch. I was expecting there to be more of a pointed criticism at the megachurch, but it wasn't necessarily this big broad villain. What was your goal with characterizing these two organizations?

Well, I mean, I come from a Christian tradition. I'm still a churchgoer. I'm the product of the Christian Reformed Church, Westside Christian, Grand Rapids Christian High, Calvin College. I know this world. And I also know that the alt-right haters and bigots are not representative of the broad, humanistic tradition of Christianity. They just have the loudest voices, and they say the most outrageous things. And people assume their numbers are disproportionate. But they're not. I went on a little seminary lecture tour two months ago, and I lectured and showed the film and talked on panels with faculty. And, you know, there is a great humanistic tradition of Christianity and it's important not to forget that.

Ethan Hawke's struggle in the film is a strong desire to accomplish something outside of the church bubble. Do you think that modern Christianity has lost sight of that social justice aspect?

It depends what church. My particular church in Mt. Kisco is very heavily invested in social justice, and very pro-inclusiveness. So you can't lump all Christian or Protestant churches in the same category. The Protestant church, we split into two kinds of worship. One is a traditional, devotional kind of worship, which is like meditation and introspection. And then there is a kind of arena-based, entertainment-based worship, which is like many of the megachurches like Hillsong. I'm not going to say one is better, because there are true believers in both, but my preference has always been for the devotional church.

I was shocked by how well Cedric the Entertainer fit into his role. How did you end up working with him?

We have such a propensity to stereotype white mass evangelists. We have a box for them. And no matter what actor you select, they're going to cram him into that box and he's going to end up looking like Pat Robertson, or Franklin Graham or Joel Osteen. I had to fight that tendency to stereotype, so I had to reach out to find somebody who gave you a different vibe. A different fit. I had been travelling around with Cedric the last couple days, and when people see him their faces light up. He makes them feel good. That's what I needed to get around the stereotype.

Did you always have Ethan Hawke in mind for his role?

Pretty much. About halfway through the script I started thinking about Ethan. I started thinking about how he's just the right age now, and he has that classic physiognomy of a troubled man of the cloth. His personality tends to be a little more bubbly, so the nice thing we were able to do was turn him around 180 degrees and make him a recessive actor rather than an active actor.

How did you find the right chapel?

We shot here in New York even though it's set further north. You know, there's that thing called the TMZ — the thirty mile zone — and that's an economic factor…. The chapel was on a hill. It was one square block on a hill. So when you got up there on the grounds of the church, you couldn't see New York City. So you thought you were in the middle of the country.

This film was shot on a very small budget. As someone who has been in the industry for so long, how do you feel about working with those constraints?

These small budgets are not so unique. It's the new normal. You pay a price for freedom, and I have freedom. All I had to do was be financially responsible in a tighter budget. But I had final cut. The movie is exactly what I said it was, what I wanted it to be. Give me three times the money, I'm not going to have that freedom.

I know you have other projects in the works, but do you feel like this could be the Paul Schrader film?

I think so. I mean, it has a sense of completion about it. It's very gratifying. It rounds things off, particularly with the revised edition of the book coming out. These two branches that sprouted in 1969 have finally come together. 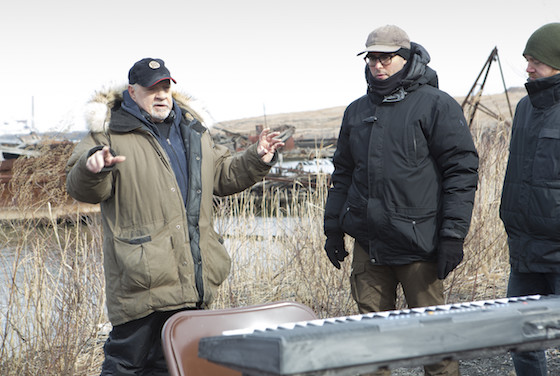