On K-pop's appeal, and how a focus on fan interaction is turning international stars like A.C.E into household names in Canada

By Hadia Khan
Published May 30, 2018
The A.C.E. fan meeting on May 19 at Toronto's Metro Convention Centre was Tatiana Prisiajny's first exposure to a K-pop concert. The first-time K-pop convention-goer and new fan of the genre was awed by the group's intense show; each time the lights slightly dimmed, or the announcer came on to say something or the boys onstage made a sharp choreographed move, the fans would scream with excitement. "Many of the fans even learned the Korean lyrics," she says. "If that doesn't say dedicated super fans, then I don't know what does."

The K-pop scene in Canada continues to grow each year, and in 2017 alone Toronto K-pop Convention (also known as TKC) brought in over 5,000 fans to the weekend-long convention. This year was no exception, as thousands of fans gathered to meet others who shared an interest in the genre.

Fans could be seen proudly sporting T-shirts and backpacks with their favourite K-pop group's logo, visiting the different panels held by local YouTubers from the K-pop community throughout the day. Some panelists even hosted activities like K-pop dance-offs, singing competitions, trivia and other K-pop inspired games.

For fans, K-pop's main appeal is the aesthetic concepts the Korean artists bring to the table. Many groups are able to create their own distinct sound and style by experimenting, switching from cute to sexy, good girl/boy gone bad, etc. One of the groups famous for their aesthetic, VIXX, even uses Greek mythology and Eastern influences to really take things to the next level. K-pop group members sport different hair colours and styles, not to mention make-up, unique outfits and props used in their concept-specific choreographies.

Music videos also play a huge role in this; management companies will spend millions on a video that tells a compelling story, creating a narrative for the fans to follow and become emotionally invested in. It's tribe-building at its finest.

For many fans, K-pop is not just about the music by itself — it's an interactive experience. K-pop artists interact with fans through live broadcasts where members talk to the fans, answer their questions directly and engage on a personal, intimate level. An app called "V" was designed specifically for these videos, and features hundreds of K-pop groups and solo artists, including A.C.E. 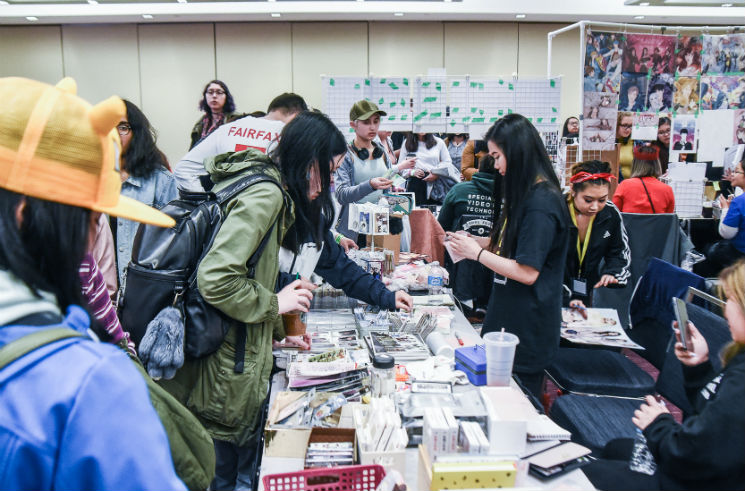 What sets the fan meeting at Toronto's K-pop Convention apart from a regular concert is the interactive aspects. Before these fan meetings, organizers erect a poster board outside the concert venue where fans are encouraged to post their questions for the artists on sticky notes. The fan meetings normally begin with the artist performing their hit song and then taking a break to greet the fans in the audience. After performing a few more songs, they take a break to answer questions that the fans left on the poster board beforehand.

It's one of many activities that please K-pop's most ardent fans, including the drawing of seat numbers to choose lucky audience members to either participate in fun games with the group members or win prizes including official merch, signed albums and posters. These games are often fun and simple, like charades, and allow the fans to pair up with the members and compete against each other. Fans are right next to their idols, interacting like friends.

After the show is over, VIP ticket holders line up, eagerly waiting to go up onstage, where the group members stand next to each other with both hands extended forward. For platinum VIP fans, there is also a photo-op session where they can take a picture their with idols. "It's a very different and interactive experience from Western artists and their concerts in terms of fan engagement," Prisiajny points out.

There are differences in the performances, too. Concerts by Western pop bands typically feature dancing, but it's more central to the performances of K-pop groups; their choreography is sharper and tighter, more vibrant and dynamic. Singers switch their positions while singing and dancing by making prompt movements in unison, a strategy called "formation changing."

A.C.E's performance was juxtaposed with cool, moody visuals and reggaeton-influenced choreography. K-pop groups are often influenced by acrobatics, breakdancing and other dance forms.

A.C.E gained their international fame because of their dance covers of other well-known K-pop artists such as BTS, EXO, Big Bang and BlackPink before their official debut in May of 2017 with "Cactus," which also featured very intense and sharp choreography. Along with their other digital tracks, the five-member group also performed vocal and dance covers of Western artists such as Ed Sheeran, Justin Bieber, Jessie J and more at the fan meeting.

Dance covers are a huge part of the K-pop community, especially on YouTube, where they garner millions of views. Each year, TKC holds a "Dream Stage" where top Canadian K-pop dance cover crews perform. This year, popular YouTube artist JuNCurryAhn, famous for his K-pop violin and dance covers, was also one of the headliners.

The Toronto K-pop Convention not only allows K-pop fans to unite and express their love for Korean music in a safe and welcoming environment, but affords them an opportunity to meet their favourite K-pop artists in a very intimate and personal way. This year also marked the first Vancouver K-pop Convention (VKC), a chance for more Canadian K-pop fans to meet their idols and other members of the K-pop community. It's that sense of community that heightens the convention for fans like Prisiajny.

"It was a truly memorable and unique convention and concert experience and I'd definitely recommend it to everyone!" she enthuses. "If you are unsure about liking K-pop, your mind will change after attending K-con."