By Gregory Adams
Published Jan 07, 2015
Narrowly avoiding a homonym-based global crisis, Spanish pop rock group the Deers have been forced to change their band name to avoid being mistaken for long-running Montreal indie crew the Dears.

The Madrilenian combo revealed the move online today (January 7), explaining that that they had received a cease-and-desist email from a lawyer connected to the Dears camp. From this point forward, the band will be known as Hinds.

"This is sadly the most official post we've ever made: We have to change our name. We mean…they force us to," the group explained in a statement. "We received an email from a Canadian lawyer saying that our name created confusion with his band's name. And that name is not even Deers (LOL). We tried our best, really, but we have no choice. So… Okay!!! Let's take this with a smile!!!! "

Links to the Deers' old Facebook, Twitter, Bandcamp, Tumblr and SoundCloud profiles have been shut down, but each social media tool has now been relaunched under the band name Hinds.

The quartet formed back in 2011 and garnered buzz over last year's Demo and Barn singles. You'll find a stream of the latter release, issued through Lucky Number Music, down below.

The Dears, the Murray Lightburn-led project formed in the mid-'90s, have not commented publicly on the name-based snafu with Deers/Hinds. They did, however, announce back in November that a new album is on the way in 2015. You'll find a trailer for Times Infinity Volume One, their first full-length since 2011's Degeneration Street, down below. 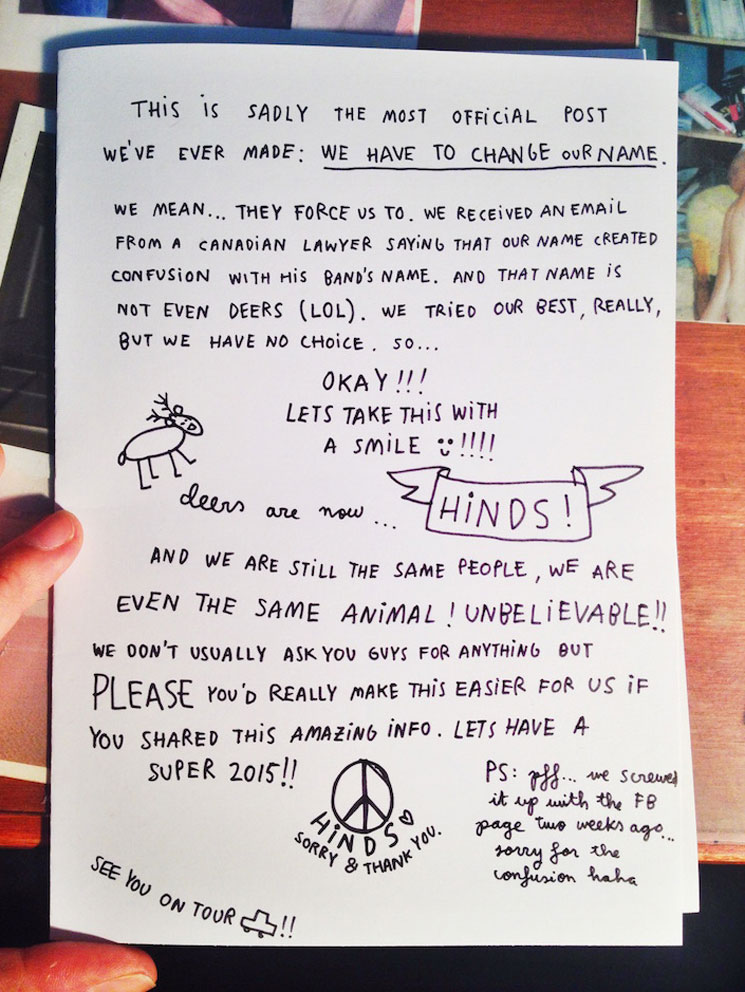