"Sloanfest" was supposed to be their last show — instead, it ended up being a key moment in their long and storied career

By Cam Lindsay
Published Aug 05, 2020
For nearly 30 years, long-standing pop-rockers Sloan and their timeless, feel-good tunes have become ingrained into Canadian music's fibres. Featuring four singer-songwriters, Sloan have been considered the country's "Fab Four" since their early days, earning comparisons to the Beatles for their unique approach to songwriting.

Sloan have outlived countless scenes and trends, while continually releasing consistently great albums that pay homage to their varied influences. But it hasn't always been smooth sailing for the band. In fact, for most of 1995, Sloan didn't even really exist. After spending their first four years putting Canada on the musical map, they were set to call it a day and go their separate ways.

Not long after forming in Halifax in 1991, Sloan were at the forefront of East Coast Canada's indie rock explosion. The following year, they signed to Geffen, which at the time was home to influential acts like Sonic Youth and Nirvana, giving Sloan an immediate affiliation that helped promote their debut album, 1992's Smeared.

This same year they founded murderecords, their own independent label with distribution from MCA. "[The label] was all about releasing bands from the East Coast and a few of our favourite bands from afar," singer/guitarist Jay Ferguson tells Exclaim! "When we toured, we always brought bands along that we either released records by or we thought deserved to be seen by more people."

In 1994, Sloan returned with Twice Removed, their sophomore album that found them dropping the grunge and shoegaze influences for Beatles-esque pop and cerebral indie rock song structures. At first, a lot of their fans were confused by what they were hearing, while Geffen deemed the album unmarketable. All of a sudden, Sloan were no longer a buzz band. 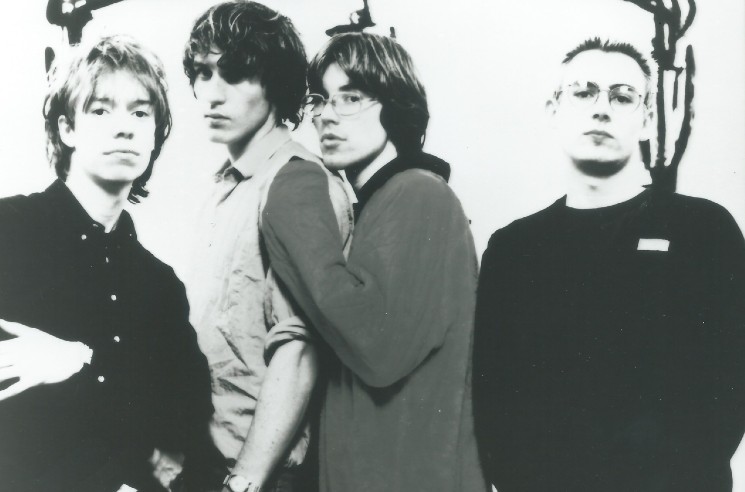 Despite becoming a CanRock classic in the years to come, Twice Removed was immediately deemed a commercial flop — a point that was hammered home in the year-end issue of SPIN, where it was tipped as one of the "10 Best Albums You Didn't Hear In 1994." Morale in the band was at an all-time low, and consensus was that Sloan should break up.

"Andrew [Scott] had moved away and we were all not getting along," explains singer/bassist Chris Murphy. "Twice Removed didn't do very well and I was thinking we were all young enough to start over. Plus, we had murderecords going, so Jay and I had that to keep us busy. We had decided in December [to break up] but we didn't want to tell anyone because we were still contractually bound to Geffen. So we were playing coy, but we had told friends and then word got out."

While deflecting questions about the split, Sloan fulfilled the remaining Canadian dates already booked for February, which were some of the biggest shows they'd headlined to date. As far as they were concerned, however, they had played their last show.

"But then this gig came up," says Murphy. "[Sloan was] kinda done. Edgefest was supposed to be our last show ever."

"In order to entice us, [Lefko] asked us to bring a bunch of murderecords bands onto the bill," says Jay Ferguson. "Since we thought murder was becoming more of a focus for us, it felt like a good way to showcase that Local Rabbits, the Super Friendz and Thrush Hermit had new records coming out."

As a bonus, the label gave away a limited edition seven-inch to the first 1,000 fans, featuring scheduled performers Thrush Hermit (whose Edgefest set would end up being the day's most memorable), Stinkin' Rich (now Buck 65), Local Rabbits and Jale. Almost every band on murderecords was added to the bill, along with non-roster invites like Plumtree, Zumpano, Pluto, Change of Heart, the Monoxides and Mystery Machine. One act on the bill that both Sloan and the audience were completely unaware of was some new band from Newport Beach, California, called Sugar Ray. Unknowingly added to the line-up by the promoter, Sugar Ray's brash, in-your-face rap-rock stuck out like a sore thumb among the rest of the bill's easy-going indie rock.

"From what I remember we were allowed to curate it, and a lot of the bands were picked by us," says Murphy, "When I see a full list of who played that day I still forget that it was anyone but our friends. But some of the bands were glaringly not our idea. Sugar Ray? Who? 13 Engines? Oh yeah, they wouldn't end their set and we had to cut ours way down. Having as many friends their as we did made for about as much closure as we could've hoped for."

By the time Sloan were set to take the stage, the rust they had gathered after months of inactivity began to show. "Between February and August we didn't play or rehearse, so we were probably terrible," says Murphy.

"I walked on stage and my cables were all in a knot," says Ferguson. "It felt really unprofessional. Like we were announced, and it took us two or three minutes before we even played the first chord of a song. We were really ramshackle and unprepared to play a show that big. I felt like, for being the headliner, it probably highlighted how under-rehearsed we were and how much better Thrush Hermit or Local Rabbits or Zumpano were than us."

As the show went on, however, Sloan's ability to win over an audience began to shine. By the time they got to their encore, a conga line broke out during "I Hate My Generation." "[Local Rabbits'] Pete Elkas was the front guy, the lead brat," remembers Murphy. "It was pretty romantic because our band was done. We loved those people and they basically formed a ring around us. It was metaphorical." Sloan and friends onstage at Edgefest in 1995.

The daylong event proved to be a bittersweet triumph for the band, but as it turned out, Edgefest wouldn't be Sloan's final show as promised. The following day, they played a radio station barbecue in Buffalo, then played with Juliana Hatfield at an event called Lancerfest in Windsor a month later.

"Edgefest was to have been our last show but by the day of the show we knew we were playing the next day in Buffalo and we knew it would be anticlimactic," admits Murphy. "And it was."

Afterwards, Scott remained in Toronto, while the other three headed back to Halifax. For a few months at the end of 1995, Sloan were officially broken up. It didn't last long though. Come December, Murphy, Ferguson and Patrick Pentland began working on some music together, and in almost no time, Sloan had unexpectedly reunited and written their third album.

"When we got back together to record what was to become One Chord to Another, the main motive at the time was to release a record to help murderecords financially with what would hope to be a guaranteed seller. It was less about Sloan and more about murderecords," says Ferguson. "Once the record was out and began selling, and we made a video and we started getting offers for more shows, it seemed like a good idea to continue as a band."

Edgefest itself may have not been what forced Sloan to reconsider their future, but it will go down as one of their greatest achievements: throwing a FOMO concert for their fans that showcased the cream of Canadian indie rock's crop. They chose to immortalize the day by referencing it on One Chord to Another.

"The show was never a part of our decision not to break up but we did include that intro from CFNY's Brother Bill as the introduction to 'The Good in Everyone,' the lead-off track for our next and most commercially successful record. So that crowd from Edgefest 3 is forever linked to our story," says Murphy.


Adds Ferguson, "It was certainly an affirming event to play to that many people and see that we still had a wide fanbase. I think we saw it as a bit of a coup for the promoters to allow us to do that at such a large venue. I think we were lucky and grateful for the opportunity to curate such a fun show with bands we considered friends and peers."

Twenty-five years after they were supposed to call it quits, Sloan are still going strong, continuing to write new music and archive old music for future vinyl reissues.

"At the time we thought that was going to be it. We thought we were [broken up]," admits Murphy. "In some way, we were active the whole year: we played in February, August and September, then recorded in December. That's kind of like the schedule we have now."

Adds Ferguson, "So essentially we're broken up now. But we'll see you next year!" The Super Friendz and Colin MacKenzie backstage at Edgefest in 1995. Photo: Jannie McInnes Revisit more highlights from Edgefest '95 with our feature on how Thrush Hermit sabotaged their breakout set.