Preoccupations' Van Stolen in San Francisco: "Everything Is Gone, Tour Is Over"

By Calum Slingerland
Published May 15, 2018
Preoccupations may be forced to cancel a world tour behind their New Material LP after their van and trailer were apparently stolen in San Francisco.

The group made the announcement on Instagram today, with a post showing frontman Matt Flegel sharing details with local police.

In a caption, the band wrote, "The curse continues 😓our van and trailer was stolen, everything is gone, this tour is fucked, the bounty no longer exists. Praying for a god damn Christmas miracle."

However, the post has since been deleted. Exclaim! has reached out to the band's team for clarification, but you can see a screenshot of the post below.

UPDATE (5/15, 5:45 p.m. EDT): Preoccupations' Canadian PR rep has explained that the band have no comment on the theft or their tour.

UPDATE (5/16, 12 p.m. EDT): The band have now launched a GoFundMe page to help make up for the devastating loss. You can get more details here.

The "curse" that the band alluded to refers to a separate robbery only four days earlier, when their trailer was broken into and looted during a stop in Vancouver on May 11. At that point, the band wrote that "luckily less than half our gear was stolen and most of its replaceable although it still hurts."

Preoccupations then made reference to their "weird trailer juju" upon arriving in San Francisco, posting a photo of a sticker that had been slapped on their rig that read, "I tolerate your existence. Sit, stay, slave."

Preoccupations were set to continue down the West Coast to wrap the tour's North American leg in St. Louis on May 24. From there, the band were to head overseas to play throughout Europe and the UK during June and July.

As of press time, however, no dates appear to have been formally cancelled. You can see the entire schedule here. There next scheduled show is set for Los Angeles on Thursday (May 17).

Find the band's posts below. 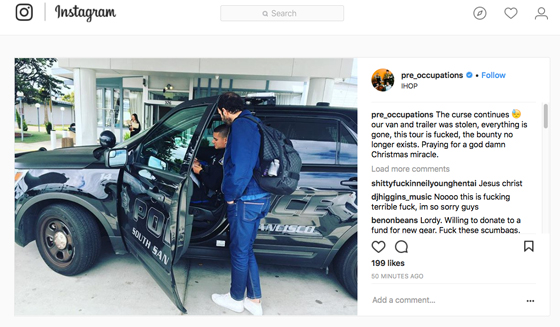 Spent the first half of today combing the back alleys and sidewalk shops of east Vancouver's Hastings and China town looking for our stolen gear. Our trailer was broken into and looted. Luckily less than half our gear was stolen and most of its replaceable although it still hurts. I just hope whoever's hands its in now they are shredding some serious fucking gnar. The show goes on 👉 tooonight in Seattle at Barboza doors at 8 we play at 10:15 W/ @moaningmusic #preoccupations #gnarbounty #rockviolation #easthastings #vancouver

We have some weird trailer juju rn I don't fuckkng get it but anyway 👉San Francisco tonight at Rickshaw Stop w/ Moaning show starts at 8 we play at 10:30 #preoccupations #gnarbounty #sanfransisco @moaningmusic @rickshawstop

The curse continues 😓our van and trailer was stolen, everything is gone, this tour is fucked, the bounty no longer exists. Praying for a god damn Christmas miracle.