By Gregory Adams
Published Jul 29, 2014
Atlanta metal titans Mastodon have over a month of downtime ahead of themselves before they head out on a North American tour supporting their progadelic new Once More 'Round the Sun LP. Rather than sitting around practising scales at home, though, guitarist Brent Hinds is refining his, ahem, wood-working skills by carving himself a big wooden penis.

As Hinds explains on his Instagram account, he recently took up carving again, with his first creation in over a year being what he describes as a "giant pawnus!"

As you can see in the picture above, the lengthy lumber phallus features some fine detailing from master craftsman Hinds. For instance, the curl of the burl at the bottom of the piece reveals a rather bulbous ballsack. The six-stringer's work also showcases sap-pumping veins streaming up the shaft, which lead all the way up to the tip of the piece.

We're not sure what cut of wood Hinds is using here, but we're trying to count the rings to see if Hinds' timbre todger has reached full growth. The musician promises more pics of the penile prop are on the way.

You can also see the carving at an earlier stage in the photo below.

Following a few festival appearances, Mastodon's upcoming tour with Gojira and Kvelertak kicks off in October and will hit Montreal's Metropolis October 29.

* with Gojira and Kvelertak 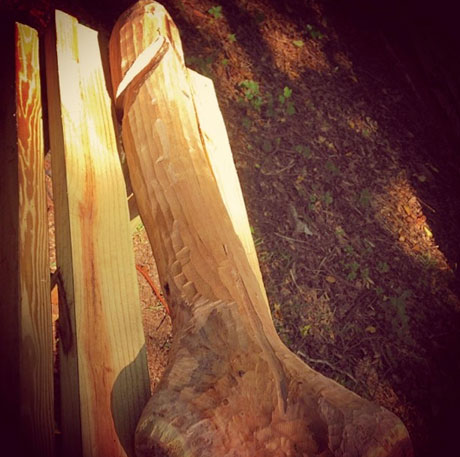