Madonna's Old House Is Being Sold by a Dog

By Megan LaPierre
Published Nov 19, 2021
It's a dog-eat-dog world out there — and Madonna's gotten the short end of the stick. The queen of pop's old property in Miami, FL, is being up-sold by a German Shepherd named Gunther VI.

Madge reacted to the listing price of nearly $32 million USD, which is apparently quite a bit more than what she got for it.

In an Instagram Story, she posted a glum photo of herself with the caption: "When you find out a dog is selling your house for 3 times the amount you sold it for!"

The pop star actually lived in the house two decades ago, but Gunther the dog now sleeps in her former master bedroom [via NPR]. Its current owner became heir to the property via his grandfather, who was also named Gunther. Despite waterfront views and luxurious amenities of the eight-bedroom home, the dog's main residence is actually a villa in Tuscany.

Now, you're probably wondering, "How does a pup come into such a bougie lifestyle?" Gunther's great-grandfather — also named Gunther — inherited many millions in trust from his owner, German countess Karlotta Liebenstein, after her death in 1992. The trust is managed by a real estate board and a number of caretakers through the Gunther Corporation, and it's now estimated to be worth about $500 million.

However, Gunther definitely enjoys the finer things in life, including a personal chef, diamond-encrusted collar, a custom velvet bed and excursions to the Bahamas by private jet.

See the screenshot of Madonna's story post addressing in response to this ruff moment in her life below. 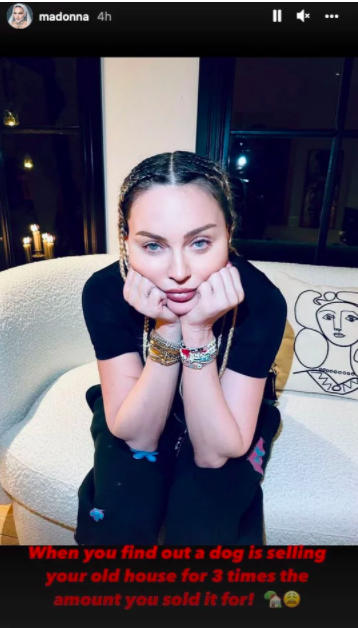 The singer recently revealed that she turned down a role in The Matrix and just released a documentary of her Madame X Tour.